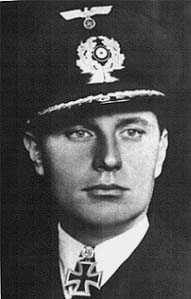 Klaus Scholtz who brought U-108 on a short patrol to New England in February 1942. Courtesy of http://uboat.net/men/scholtz.htm.
Korvettenkapitän (later Fregattenkapitän) Klaus Scholtz entered the New England area on the 2ndof February 1942 south of Cape Race and proceeded west to a point about 50 miles south of Nantucket before heading southwest and out of the region on the 6th without having sunk any ships there. Off Maryland the sub sank the Ocean Venture and off Hatteras the Tolosa and Blink, followed by the Ramapo and Somme off Bermuda (see www.uboatsbermuda.blogspot.com).
Klaus Scholtz was born on 22 March 1908 and was thus 33 at the time. He was to survive the war and live until age 79, in 1987. He was a highly successful U-Boat commander, with 25 ships sunk or damaged for over 125,000 tons. This earned him the Knights Cross with Oak Leaves in September 1942.
After that he moved to commander of the 12th Front Flotilla in Bordeaux. When the base was over run in August 1944 Scholtz and 220 men tried to break out and trek overland to Germany but were captured by Americans in the Loire Valley and he was imprisoned for 18 months as a POW.
Scholtz began his career on the torpedo boats G-8, G-11 and Jaguar before moving to U-Boats in 1940. In April 1941 he sank the British Armed Cruiser AMC Rajputana of 16,644 in the Straits of Denmark, earning him a “Well done!” message from Admiral Dönitz.
SOURCES:
Busch, Rainer and Röll, Hans-Joachim, “German U-Boat Commanders of World War II, A Biographical Dictionary,” Greenhill Books, London and Naval Institute Press, Annapolis, MD, 1999
Helgasson, Guðmundur and Kolbicz, Rainer, www.uboat.net, 2015
Högel, Georg, “U-Boat Emblems of World War II 1939 – 1945,” Schiffer Military History, Atglen, PA, US, 1999
Kurowski, Franz, Knights of the Wehrmacht, Knight’s Cross Holders of the U-Boat Service,” Schiffer Military/Aviation History, Atglen, PA, US, 1995
Mason, Jerry, www.uboatarchive.net – for the KTB or war diary of this patrol, 2015
Niestlé,Axel, “German U-Boat Losses During World War II – Details of Destruction,” Naval Institute Press, Annapolis, MD