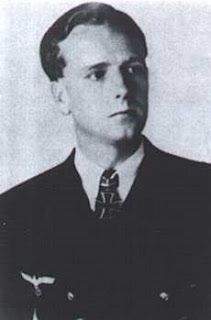 Hermann Rasch, commander of U-106 during its 7-day incursion to New England in early 1942. Courtesy of http://uboat.net/men/rasch.htm
Oberleutnant zur See(soon to be Kapitänleutnant) Hermann Rasch, aged 27, took his command U-106 on a seven-day incursion across New England waters at the end of January. Starting on the 26th when he passed well south of Cape Sable Nova Scotia, the boat headed west across the entrance to the Gulf of Maine, still well south of New England, but inside the continental shelf, for the next three days. U-106 exited west of Montauk on the 29th of January.
Then, after several days looking for targets off New York the sub returned on the 4th of February via roughly the same route, only further south still. For three days Rasch headed east until passing south of Cape Sable again and out of the area. He sank no ships while off New England.
U-106 was active along the rest of the US coast, sinking the British Empire Wildebeeste two days before entering the area, then on the day it transited out of Canadian waters the Traveller of 3,963 tons and British flag. This vessel was sunk in a matter of minutes in the early hours and a secondary detonation was heard by the U-Boat. None of the ship’s 52 officers and men survived. The vessel was sunk just inside Canadian and thus outside of New England waters.
After passing Montauk U-106 dispatched the American ship Rochester on the 30th of January, then the Swedish Amerikaland onk 3 February, and finally on the 6th of February the Opawa, which was a British motor vessel of 10,354 tons, northeast of Bermuda. So after moving south from Newfoundland Rasch and his men were able to identify and sink five Allied merchant ships.
Born 26 August 1914 in Wilhelmshaven, Rasch joined the Navy in the Crew of 1934. Over six patrols he led U-106 on 308 patrol days and earned the Knights Cross in December 19th1942 for destroying two large vessels in as many days that month. After leaving U-106 in April 1943 Rasch moved to officer / command / administrative roles ashore, including Admiral Staff Officer and head of the midget submarine program.
As a Kommando group commander he developed the Seehund and Biber class midget subs. The Allies imprisoned him for over a year, following which Rasch was a journalist in Berlin, Hamburg and Düsseldorf. He died in 1974 in Hamburg, aged 59.
SOURCES:
Busch, Rainer and Röll, Hans-Joachim, “German U-Boat Commanders of World War II, A Biographical Dictionary,” Greenhill Books, London and Naval Institute Press, Annapolis, MD, 1999
Helgasson, Guðmundur and Kolbicz, Rainer, www.uboat.net, 2015
Högel, Georg, “U-Boat Emblems of World War II 1939 – 1945,” Schiffer Military History, Atglen, PA, US, 1999
Kurowski, Franz, Knights of the Wehrmacht, Knight’s Cross Holders of the U-Boat Service,” Schiffer Military/Aviation History, Atglen, PA, US, 1995
Mason, Jerry, www.uboatarchive.net – for the KTB or war diary of this patrol, 2015
Niestlé,Axel, “German U-Boat Losses During World War II – Details of Destruction,” Naval Institute Press, Annapolis, MD