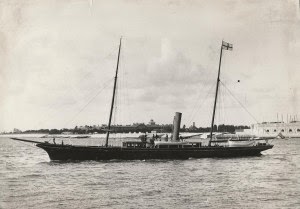 HMS Firequeen, the flagship of a British admiral in Porstmouth, UK, before she became the Bahamas lighthouse tender Firebird and then the freighter Bahamian.

Photo from an article by Ellsworth Boyd entitled “Island Wreck Dishes Recipe for Adventure,” at
http://www.oxfordinklings1942.com/2013/11/01/island-wreck-dishes-recipe-for-adventure/
MAILBOAT NAME: M/V Bahamian, c.1933-c.1946
PAST NAMES: Yacht Candace, 1882 – 188?, HMS Firequeen 188?-1920, Lighthouse Tender Firebird, 1920-193?,
DIMENSIONS: 167.8′ long, 23.6′ wide, 12.3′ deep, 76 net tons (?), 269 gross tons (?), 500 I.H.P. (Imperial Horse Power?) steam turbine
CONSTRUCTION: Leith, England, 1882 apparently as a yacht for a wealthy British “playboy”
YEAR BUILT: 1882
BUILDER: not known
EARLY CAREER: raced in France and UK as yacht Candace, then given or sold to the Royal Navy and renamed the Firequeen. Served for 40 years or roughly 1890 to 1930, then assigned to the Bahamas as a lighthouse tender
BAHAMAS CAREER: began as a lighthouse tender.
CAPTAINS: in 1935 the Firebird Captain was W. Moxeley, the Second Officer was H. Pinder, and F. Pool was the Chief Engineer. Later when she was the Bahamian, Charles Munro her owner, of Nassau was likely the captain, as the Firebird Cleveland Malone was radio officer (see below)
OWNERS: A British aristocrat (Candace), then the Royal Navy (Firequeen) then the Imperial Lighthouse Service of the Bahamas (Firebird) and finally Charles Munro of Nassau.

FATE: wrecked just west of Blue Lagoon Island (Salt Cay), north of Paradise Island (Hog Island).
There is a FaceBook page entry for Jan. 26, 2012 with a photo of the Firebird and the following entry: “This is the ‘Firebird” and was the lighthouse tender for the 10 lighthouses in the Bahamas during the 1940s. Cleveland Malone (inset), was the radio officer on the ship at the time. Cleveland is the son of Brady and Flossie Malone of Hopetown and grandson of Capt. Samuel Malone. Cleveland is still living at 85 years. Picture and infomation was supplied by David and Kay Malone Mayhew of Freeport GB” 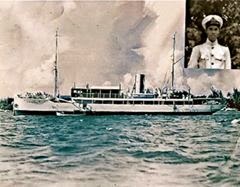 Resources: Warning: All years / dates are fuzzy as every account contradicts the other….
The underwater photographer J. Ernest Williamson made a film using Firebird (not “Bahamian”) in 1940, and I have met a young student in Nassau who says his British grandfather hunted German U-Boats in the Bahamas on the Firebird in WWII, so it appears the vessel survived the war. Source:

“After shooting scenes in Technicolor for Paramount’s Bahamas Passage in 1941, the photosphere was opened to visitors for the first time, and finally brought ashore in the late 1940s. For the Bahamian government, he shot a color record of a trip around the lighthouses of the islands aboard the ship Firebird during the 1940s.” http://jv.gilead.org.il/taves/withwill.html

For an article in blog with illustrations see http://www.oxfordinklings1942.com/2013/11/01/island-wreck-dishes-recipe-for-adventure/ Here is an excerpt about a daring rescue made by the captain:

“Reduced to a plain, general cargo ship, her stately masts were chopped off, while peeling paint and rust appeared on the hull. Finally condemned after eight years of service, the failing derelict had one tune of glory yet to play. Tied to the wharf, waiting to be stripped of her engines and fittings, the dock master received a call that nearly 100 Bahamians were marooned on a small island 20 miles away. They were awaiting rescue from a hurricane with raging winds heading their way, but none of their small boats could hold more than a dozen people.
The captain of the Bahamian was summoned and quickly assembled a crew, cranked up the engines and headed into rough seas hoping the old vessel would hold up for one more voyage. It was a rocky trip, but the seasoned craft made it safely to the island, loaded everyone aboard and made it safely back to port.

For the list of the crew and officers of the Firebird, see  The Early Settlers of the Bahamas and Colonists of North America  By A. Talbot Bethell, page 116

For an article on the dive site, calling the wreck the Mahoney, see “Today the shipwreck is known as The Mahoney Wreck (no one knows why!), and is it scattered on the sandy bottom ocean floor under 25 to 45 feet of water. The ship actually broke in two while sinking, so the bow and stern are separated by 100 yards. A couple years after it sunk, The Mahoney was blown up under water because it was considered to be a possible hazard and interference for ship navigation systems, but there are still lots of pieces to see. If you’re interested in diving around this ship, make sure to wear protective clothing because The Mahoney is covered in fire coral!”
http://www.nassauparadiseisland.com/4-famous-historical-shipwrecks-in-the-bahamas-2/