MAILBOAT NAME: M/V AbastashaPAST NAMES: not known but this is probably a miss spelling, possibly of AnastasiaDIMENSIONS: not knownCONSTRUCTION: not knownYEAR BUILT: before 1973BUILDER: not knownEARLY CAREER: not knownBAHAMAS CAREER: served as a mailboat from Nassau to Mayaguana, Acklins, and Crooked Island as a mailboat listed by the Bahamas government in August 1975CAPTAINS: not knownOWNERS: not known

FATE: believed sunk off Northern Potter’s Cay Dock, Nassau, in the 2000’s, then in Fall 2016 as part of a governmental / Bahamas Ferries cleanup raised and tied to Arawak Cay. 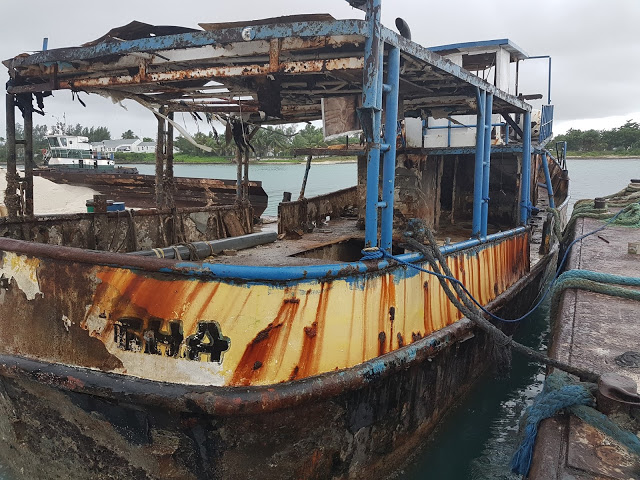 This image is of either LADY TASHA or ABASTASHA – name is obscured by years of immersion and neglect, after having been raised and towed from Potter’s Cay to Arawak Cay in the Fall of 2016. It may be a case of just kicking the can down the street as there seems no firm salvage or disposal arrangement for the vessel, but at least it’s not congesting the waterfront at Potter’s Cay – now just Arawak Cay’s waterfront…. It is on the Southwest tip of the Cay, which was recently expanded by dredging spoil.

The submerged wreck of the LADY TASHA aka Abastasha at Potter’s Cay, March 2015.