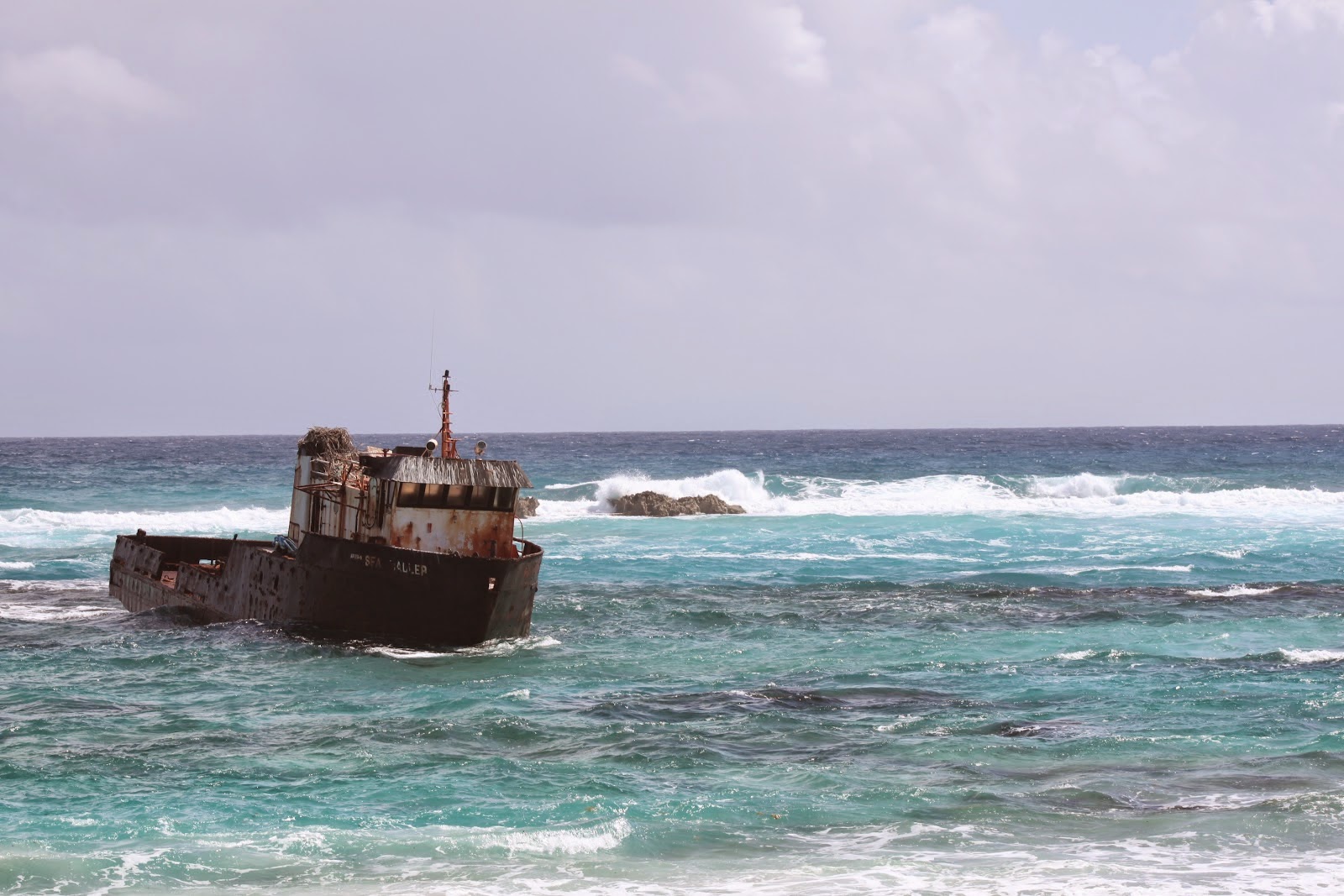 The Sea Hauler wrecked off the north coast of Long Island, Bahamas, per a yachtsman’s blog, 2012. The name can barely be discerned on the starboard bow – note the sea hawk nest on the stack. Normally I would not use a wreck image to illustrate a vessel, but few images of her survive.

MAILBOAT NAME: M/V Sea Hauler
PAST NAMES: not known
DIMENSIONS: 98′ long, limited to 120 passengers but in August 2003 had around 200 on board.
CONSTRUCTION: steel
YEAR BUILT: not known
BUILDER: not known
EARLY CAREER: not known
BAHAMAS CAREER: From 1989 to about 2011 served South Cat Island, Smith’s Bay, Old Bight, New Bight, leaving Mondays at 7 AM from Nassau, arriving Tuesdays at 3 PM, costing $40 per passenger.
CAPTAIN: Captain Allan Russell Sr., of Cat Island
FATE: in 2003 was in a severe collision with the M/V United Star 14 miles south of Eleuthera (see summary below), then between 2003 and 2012 (probably 2011 judging that the boat looks freshly grounded in 2012) was grounded and abandoned in shallow water in the north coast of Long Island per photo above.
OWNERS: Captain Allan Russell Sr.
NOTES ON COLLISION WITH M/V UNITED STAR: To be fair regarding an issue which is still very sensitive in the Bahamas, I will try to stick to just the stark facts and post the same information on both the M/V Sea Hauler and M/V United Star blog posts.

SEA HAULER: A 98-foot cargo/passenger vessel which left Nassau in an arguably overcrowded condition (194 passengers though rated for 120, plus 7 crew for a total of 201 persons) on the evening of Friday 1st August 2003 bound for Cat Island with roughly 200 revelers who were going, many of them, home to Cat Island for the long Emancipation Day weekend. Her skipper was also the owner, Captain Allan Russel Sr., who had been doing the route since at least 1993 (see below note). There were many persons gathered on the after deck where music was being played, and other slept on deck.

UNITED STAR: A 178-foot landing-craft-type roll-on, roll-off (Ro/Ro) cargo freighter, left Cat Island bound for Nassau and on Saturday 2nd August was about 14 miles south of Eleuthera Island heading northwest under the command of Captain Rodney Miller. The ship was carrying 11 persons, cars and general cargo. It was nighttime.

Although both skippers took last-minute evasive action, it was too late, and the United Star’s port, or left bow, smashed into the port quarter, or stern, of the Sea Hauler. The consequences were tragic: four persons were crushed to death when the crane toppled on them, another man lost his leg below the knee, and 25 persons were injured.

In the aftermath both vessels tied up alongside each other, several of the worst wounded were evacuated by US Coast Guard helicopters and Royal Bahamas Defense Force craft several hours after the accident. Some passengers may have continued on to Cat Island on other vessels. The situation was at times chaotic, though sea conditions were said to be calm and clear.

Both vessels promptly returned to Nassau where others among the injured were treated at Princess Margaret Hospital. There they were met by the Deputy Prime Minister and later the Prime Minister, who termed the event a tragedy of national importance.

Though a committee was formed to investigate the incident. That report, through a government-appointed Wreck Commission, was presented to the Minister of Transport and Aviation on January 4th, 2005, however efforts by this blogger to unearth the report have so far been unsuccessful. The incident led to a number of lawsuits, including 9 civil actions filed in the Supreme Court against the government by 2006.

On a lighter note concerning the early trade of the Sea Hauler, this is a 1993 story of reminisce by a writer/blogger named Anthony Weller in Cat Island: “The unreliable decrepit mail-boat I first arrived on, the Willaurie, [see this blog] has sunk in Nassau Harbor, replaced by the newer Sea Hauler, a high-prowed black vessel with a mustard-colored crane for moving heavy cargo. One recent afternoon I tore myself away from the beach at Fernandez Bay and bicycled the mile north to Smith Bay to watch the mail-boat unload its standard weekly cargo, everything from propane tanks and Kalik beer to a generator, a truck, wood planks, paper cups, sacks of cement, cinder blocks, rice. The boat had arrived around four a.m. after a twelve-hour journey over from Nassau; it would leave that night for Great Exuma.
Allan Russell, the boat’s owner and a Cat Islander, explained that he was paid a subsidy by the government to bring the mail every week. After unloading in Exuma, the mail-boat would return in two days to pack fruit and vegetables (Cat is one of the most agricultural Bahamian islands) for the Nassau market.”
Source: http://blog.writeweller.com/1993/12/cat-island.html Dec 2, 1993 blog post by Anthony Weller