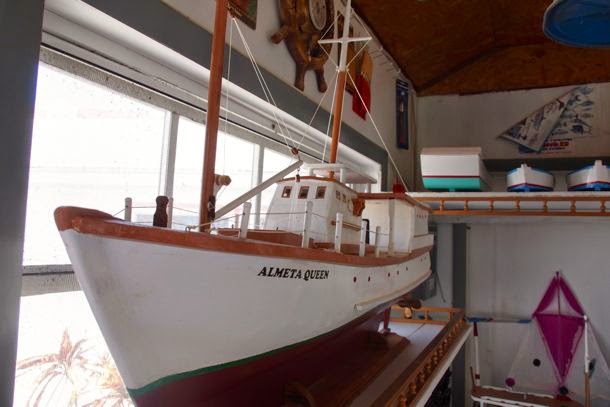 A model of the Almeta Queen made by Captain Vertrum Lowe in Green Turtle Cay Abaco which is available for purchase according to http://www.uncommoncaribbean.com/2012/09/12/uncommon-buy-vertrum-lowes-bahamian-model-ships/

MAILBOATS NAMES: M/V Almeta Queen (motor) & M/V Almeta (sail)
PAST NAMES: Almeta Queen was lauched as the Royal Canadian Navy’s motor launch Q-080.
DIMENSIONS: Almeta Queen 107.5′ length, 18′ beam, 10.3′ draft, 81 gross tons, 120 net tons, and engines of 1,300 bhp, two Hall-Scott gasoline engines two short masts, official # 178622, Almeta official # 176988 built 1946, sail
CONSTRUCTION: wood
YEAR BUILT: Almeta Queen by J. J. Taylor, for “War Supply Ltd.” in Toronto, 17 June, 1942, Almeta: 1946, sail
BUILDER: Benjamin Roberts’ father in Marsh Harbour Abaco
EARLY CAREER: mostly carrying crawfish and freight between Abaco and West Palm Beach Fla. once she reached the Bahamas. Before that she served in the Royal Canadian Navy and was in the United Boat Service on City Island, New York, then a private yacht owned by H. B. Prior in Larchmont, NY before being sold to Abaco.
BAHAMAS CAREER: believed by Eldwyth Roberts to have carried freight and possibly mail among the Bahamas as well as crawfish to Florida and freight to and from Cuba.
CAPTAINS: not known
FATE: by 1957 the Almeta was no longer listed, however the Almeta Queen was listed as having been built in Toronto, Canada in 1943 and registered to Nassau in 1947 and still trading in 1957.In 1954 she is said to have been renamed Cosa Grande and sold to owners in Port O’Connor, Texas with new 1954 engines. By the 1970s she was in the Panama registry and in August 2007 was sighted in aerial photographs rotting on the River Platte of Argentina
OWNERS: Abaco Trading Company Limited, Nassau, NP – believed to be members of the Benjamin Roberts family in Marsh Harbour Abaco
NOTES:

Thanks to Mrs. Eldwyth J. Roberts and Danielle Roberts of Abaco, descendants of Sir George W. K. Roberts, for their assistance. Also thanks to Brett Davis, a seagoing engineer, for his help.
The following fascinating entry is by an esteemed maritime historian in Canada who helped unravel details of Canadian ships sunk in the Bahamas and Turks & Caicos in WWII,

Where Did the RCN Motor Launches Get To? by Commander Fraser McKee RCN(R) 2015, from http://www.nauticapedia.ca/Articles/Navy_MLs.php