American steam tanker Muskogee, sunk by U-123 under Hardegen on 22 March 1942 while on a voyage from Venezuela and Trinidad to Halifax.
Photo source: http://www.uboat.net/allies/merchants/ships/1464.html
The steam ship Muskogee was built in 1913 by Ferdinand Schichau Werft GmbH in Elbing, and Danzig in the Baltic Sea. She was hull number 890. The ship was 7,034 gross registered tons (GRT), 451 feet long, 58.1 feet wide and 31.2 feet deep. A single three-cycle triple expansion steam engine developed 344 net horsepower and drove the ship at ten knots.
Her original name was Triton, as between launch in 1913 and 1914. At that time her owners were the Deutsch-Amerikanische Petroleum Gesellschaft APG, or the Esso Tanker Owning Firm of Hamburg. The ship was then sold (or transferred) to the Standard Oil Corporation of New Jersey (of which Esso was a division). From 1914 until her final voyage in 1942 the ship was registered to Wilmington, Delaware. On her final voyage she was owned by Marine Transport Lines Incorporated (MTL) of New York, NY.
Muskogee is named after a town and county in Oklahoma, US. Her master in 1942 was Captain William W. Betts. He was supported by Chief Mate Morgan J. Finucane, Second Mate Cluade D. Blanchette, and Third Mate Nathaniel D. Foster. The Chief Engineer was William B. Hampton and the Radio Operator was Clifford E. Chesley. As the tanker was unarmed there was no armed guard aboard. The total complement of merchant mariners was 34 men.
During 1941 the Muskogee called at New York frequently; in January, March, April, May, June, July, August and December. Then in mid-March she loaded 67,265 barrels of heavy Venezuelan crude oil in Caripito. She sailed from Venezuela on Friday the 13th of March and proceeded to Port-of-Spain Trinidad to top up on bunker oil. Her destination was Halifax, where no doubt the ship was to join a convoy to the UK to deliver a much-needed cargo.
On Sunday the 22nd of March the ship was 330 nautical miles north northeast of Bermuda and 445 nautical miles southeast of Nantucket. At 2:47 pm German time which was roughly 8:47 am local, or ship’s time, Korvettenkapitän Reinhard Hardegen in command of the German submarine U-123, which had left Lorient France on the 2ndof March and had not sunk any ships on this patrol, made the following observations in his war diary, or KTB (Krieg Tag’s Buch):
Accelerating: “…while looking around from the bridge I suddenly saw a strong column of smoke to port ahead.  Turned towards it and soon recognized masts and the funnel of a tanker on general course 345°.  Our Sunday roast!  Overtook and measured speed at 7 knots.  Apparently he is zigzagging to 15° on each side, but it is also possible that he is just running ahead of the sea and is swerving so wide because the man at the rudder is not paying attention.” 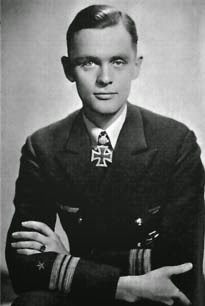 Korvettenkapitän Reinhard Hardegen, who began the Pauckenshlag campaign and sank the Muskogee, and whose crew photographed the survivors.
Photo source: http://www.uboat.net/men/hardegen.htm
At 10:00 am local time he further noted that “…Because the wind gets stronger and the sea is already 4-5, I have to attack quickly and I am not able to determine the speed accurately.” Decelerate.
At 11:06 am local time Hardegen noted: “and ran towards it.  Approached for a stern attack and fired one Ato set to run at a depth of 3 meters.  Turned away so that the torpedo is running athwart to the sea.  The swell was increasing and the boat was difficult to handle.  Tanker was coming closer quickly, that’s why I set enemy speed to 8.5 knots.  At target angle 60° the boat dipped too deep for a long time.  I had set “Lage laufend” when the target angle was 0°.  Now everything went very fast due to the target being very close, less than 500 meters.  Besides that he was apparently turning away or was swerving again to 15° to starboard, because I saw him at target angle 100° when the periscope surfaced for a short time.  The boat dipped down again and I could only see both mast tips when I fired, aiming at the middle of the ship.  Large angle of about 60°.”
At 11:56 am the German commander recorded “After 18 seconds a short, clear, metallic impact.  Not actually a detonation, which should have been heard from this close distance.  Already assumed a dud.  But when the periscope surfaced again I saw a dark black plume collapse behind the stern.  He must have been hit deep in the engine room, because the stern is already deep in the water.”
At 12:02 pm Hardegen wrote: “Surfaced immediately.  When I climbed out of the conning tower hatch, the stern was already submerged.  The bow is rising more and more and sinks at a steep angle after 16 minutes.  He was fully loaded with heavy crude oil.  Did not burn.  Because he sank so fast I thought that he was only about 5000 GRT.  But the questioning of the crew and name tags on the lifejackets shows it was MUSKOGEE (7034 GRT), built in 1913.  That’s why he sank so fast.”
By 12:12 he recorded “Continued on old course.  We are allowed to hunt freely from Cape Hatteras to Key West.” What Hardegen did not note is that a number of his crew took photographs of seven survivors drifting on the storm-tossed waves. These photographs, particularly a series of three images in which the raft can be seen approaching the submarine from the ship, with the stricken Muskogee in its final moments in the distance, would take on a life of their own, particularly as, tragically all 34 men from the ship were never seen again. 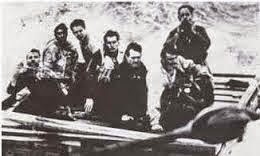 The iconic image of Muskogee survivors, taken from the conning tower of U-123.
Photo source: http://www.usmm.org/puertorican.html 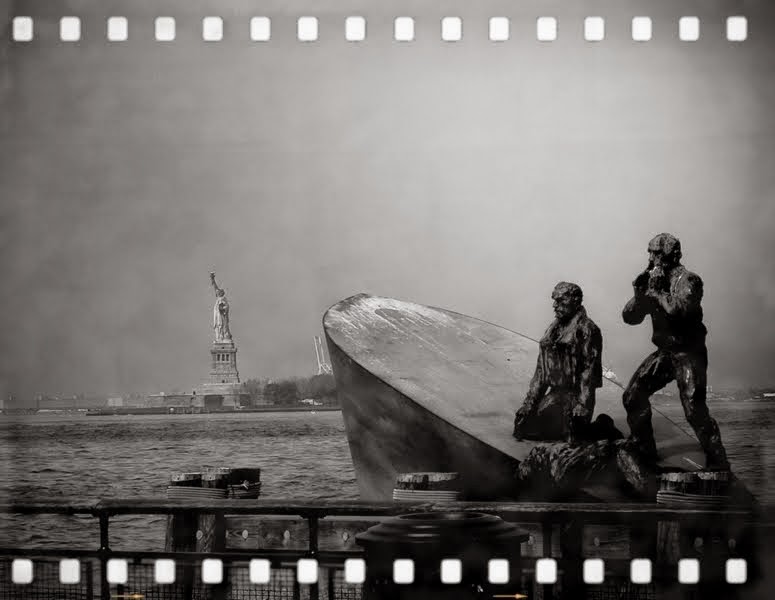 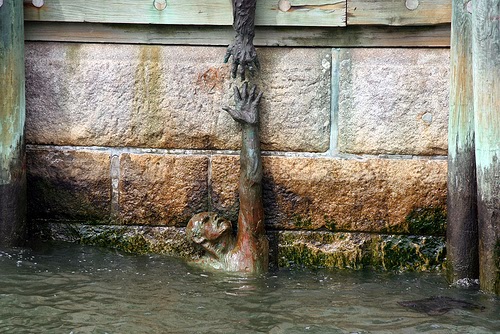 Detail from the American Merchant Mariner’s Memorial, based loosely on the Muskogee photos.
Photo source: http://holykaw.alltop.com/the-haunting-tale-behind-the-american-merchan
NOTE: This author has accessed several box files of documents relating to the Muskogee men and the survivors on the raft, who formed the basis for the American Merchant Mariner’s Memorial statue in Battery Park, New York, NY (by Marisol Escobar). This material will come available as a book on the topic – tentatively entitled U-Boats Off Bermuda, is completed.
SOURCES:
Fold3.com – for the war diaries and deck logs
Gannon, Michael, “Operation Drumbeat,” Naval Institute Press, Annapolis MD, 2009
Holm Lawson, Sir, warsailors.com,
Jordan, Roger, The World’s Merchants Fleets 1939, Naval Institute Press, Annapolis, MD, 1999
Mason, Jerry, www.uboatarchive.net and http://uboatarchive.net for the translated KTB of U-123
Mozolak, John, “New York Ships to Foreign Port, 1939 – 1945,” http://janda.org/ships/
Uboat.net for much of the information, including photos of U-boat Commander and its victim, http://www.uboat.net/men
Wrecksite.eu for specifications and history,  http://www.wrecksite.eu
Wynn, Kenneth, U-boat Operations of the Second World War, Volume 1 and Volume 2, 1997