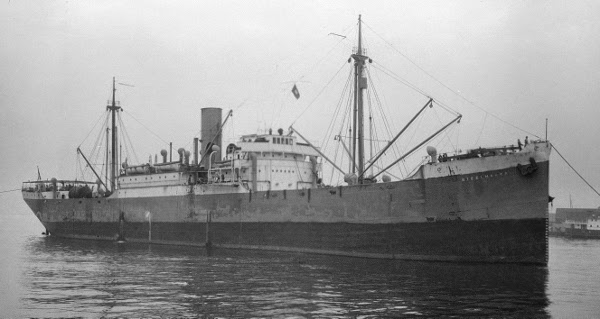 The American steam ship Steelmaker, sunk by U-654 under Ludwig Forster southwest of Bermuda on 19 April 1942.
Photo source: http://www.uboat.net/allies/merchants/ships/1554.html
The American steam ship Steelmaker (also spelt Steel Maker) was built by the Federal Shipbuilding and Drydock Company of Kearny, New Jersey as yard number 32 in 1920. The ship weighed 6,176 gross registered tons (GRT), and was 412 feet long, 55.1 feet wide and 32 feet deep. Two steam turbine engines made by the Midwest Engineering Company of Indianapolis turned a single shaft with 596 net horsepower to achieve 11 knots’ speed. She had a steel shelter deck, main deck and her engines were fitted with fuel oil tanks.
The Steelmaker’s maiden voyage was from New York to Vancouver with steel. Her commander at the time was Captain George Wright. For the duration of her 22-year career the ship sailed for the Isthmian Steam Ship Company (aka Isthmian Lines Inc.) of New York, NY, though her very first owners were the US Steel Products Company of New York.
Her armament consisted of a 4-inch gun, two .30-caliber guns and two .50-caliber machine guns. The Naval Armed Guard consisted of an Ensign in charge and eight navy sailors who served as gunners in Naval Gun Crew 223. The Ensign in charge was W. B. Edelsen and the men under his charge were named Rumbaugh, Jukes, Johnson, Hunter, Hutchinson, Heiser, Cook, and Bailey.
The master on Steelmaker’s final voyage was Captain Leonard Duks (alse spelt Dukes). The Chief Mate was Joseph A. Scully, Second Mate William McCarthy, and Third Mate Edwin J. Penn, Jr. The Radio Operator was Harley A. Olson of Portland, Oregon. There was also a passenger named Alfred James and three Filipino crew – Rupino Alado, Victor Tubo, and Isidro Isip, was well as citizens of Latvia and Spain and several naturalized Americans. Altogether there were 48 men aboard the ship on her final voyage.
During 1940 the Steelmaker called at New York in February and August, and the following year in May and November. According to interrogation of the ship’s officers and navy gunners it was established that the Steelmaker departed New York Harbor on Thursday the 16th of April, 1942 and were bound for the Persian Gulf (specifically Adadan, Iran) via Cape Town (Mozolak’s research states they left the 15th and were calling at Bahrain and Bombay). The cargo was 7,660 tons of military stores and equipment, including considerable crates and possibly aircraft on deck.
On the night of Sunday the 19th of April the ship was roughly midway between Cape Hatteras and Bermuda – in fact it was 300 nautical miles west northwest of Bermuda and 260 miles east southeast of Hatteras. Captain Duks noticed that there was a trail of phosphorescence following the ship for about a mile, leading him to believe a submarine might have spotted them. Steelmaker was following the zig zag pattern proscribed by the Navy as number 10. Her average course was 190 degrees true, or roughly south, and speed was 10 knots.
That night there were six lookouts on duty – three were on the bridge, one was at the very front of the ship in the “eyes,” and there were two naval gunner aft at the fantail by the guns. Radio Operator Olson’s equipment was silent and the ship was blacked out. The seas were calm, with a gentle wind from the northeast, visibility was good though slightly overcast and there were no other vessels in sight.
At 10:30 pm ship’s time a torpedo passed just astern of the Steelmaker (some account say 10:32, another says 10:28). Before the alarm could be raised another one, fired from a roughly 45-degree angle of the port quarter hit the ship amidships on the port side in one of the aft cargo holds roughly 10 feet below the water line. The torpedo blew a large hole in the side of the ship, through which cargo quickly poured out, some of it rising to the surface. The engines were immediately stopped and the crew quarters aft were badly mangled. By some account the propeller shaft was broken as well, however all the men in the engine room managed to escape.
Although all of the gunners raced aft to man the big gun, Ensign Edelsen told them that it was useless as there was no submarine visible to aim for and the ship was already going down. Soon Captain Duks was yelling for all men to abandon ship. One of the boats – lifeboat number two – got stuck five feet into being lowered and the men scrambled back on board. However they succeeded in lowering two boats, one of them a motor boat, and in collecting men from the water. When both boats had pulled away they found that they had 46 men out of 48: Radio Operator Olson and John T. Allen, a Steward, were missing. It had taken them just five minutes, to 10:35 pm, to abandon ship. 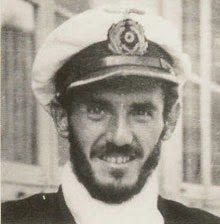 Oberleutnant zur See Ludwig Forster of U-654 who sank the Steel Maker on 19 April 1942.
http://www.uboat.net/men/commanders/299.html
At about 10:40 pm, or 10 minutes after the attack, Oberleutnant zur See Ludwig Forster, commander of the German submarine U-654 surfaced near the boats to question the survivors, specifically Captain Duks, in a heavy Germany accent. He asked the ship’s name, tonnage, cargo and destination. Aside from being told the cargo was 10,000 and not 7,660 tons, the replies were accurate. On gathering his requested information Forster is reported by multiple sources to have said “I am sorry to have to sink you and do this to you, but this is war. You will be rescued, do not worry, I shall send your position out by radio.” However no radio communication was received ashore either from the ship or the sub.
The submarine then left them for the vicinity of the stricken ships. The men in boats reported seeing lights flashing between what appeared to be two U-boats. However unbeknownst to them, the Radio Operator Harley Olson was still alive and on the ship, desperately trying to get away on several rafts. He might have been signaling via flashlight for someone to come and get him. Five minutes later, at about 10:45 pm, the ship was seen to sink. The submarine was seen to submerge and motor off a short time later.
At 11:00 pm the two boats let go their sea anchors to wait out the night, and it rained that night. Before noon (11:00 am) the next day, Monday April 20ththe two boats exchanged crew until there were 18 in one boat and 27 men in another – presumably the motor boat was the bigger of the two. It was not long before the boats became separated. Passenger Alfred James, aged 29, from Larchmont New York, was on a “special mission” to the Middle East. A keen small boat sailor, he says he and his 26 companions “ate on each day, as there were supplies in the lifeboat. ….We had pemmican, a lean meat which is dried and pressed into cakes, water and biscuits, where were a combination dog biscuit and graham cracker.”
According to James, they were passed over by both an airplane and a ship, and the effect was to lower morale among the crew, who “…mumbled to themselves, convinced they would never see land again.” He told of trying rags to the boat hook in order to catch fish – this proved unsuccessful. It would be ten days at sea before the men in the larger motor boat were rescued.
Meanwhile on the Captain’s smaller boat the duration of their ordeal was not near so long. After setting off for the north northwest they sailed for two days and ono Wednesday the 22nd of April were sighted and rescued by the US destroyer USS Rowan. The navy sailors picked up their comrades and merchant sailors at 5:38 pm that day and presumably destroyed the lifeboat, as was naval practice.

USS Rowan DD 405 which rescued 18 survivors of SS Steelmaker on 22 April 1942.
Photo source: http://www.history.navy.mil/photos/sh-usn/usnsh-r/dd405.htm
The USS Rowan (DD 405) was completed in the Norfolk Navy Yard on 5 May 1938. She was 1,850 tons GRT, 340.5 feet long, 35.5 feet wide and 17.3 feet deep. Powered by 50,000 s.h.p. Westinghouse Geared Turbines, she had two propellers and was capable of 37 knots’ speed. There were 175 navy officers and sailors aboard her. Her commander at the time of the Steelmaker rescue was Lieutenant Commander B. R. Harrison, Jr. The ship had also just rescued 177 survivors of the Allied steamship San Jacinto and reportedly been attacked by torpedoes, so the ship would have been quite full of survivors, who outnumbered the officers and crew.
The position where the men were picked up was 101 na
utical miles south of where the Steelmaker was sunk, and 300 nautical miles southeast of Cape Hatteras. Despite their best efforts they were further from land than when the set out. Commander Harrison took the 18 men to Norfolk, Virginia where they arrived at noon on Thursday the 23rdof April, 1942.
In Norfolk the first batch of 18 survivors were given medical care and questioned about the casualty. The Eastern Sea Frontier’s Enemy Action Diary for Thursday April 23rdincluded the notice that “There were 47 in the crew. Planes and surface craft are requested to be on the alert to locate a motor lifeboat with sail and containing survivors of STEELMAKER.”
Roughly a year and a half after her rescue of the Steelmaker and San Jacinto sailors in the spring of 1942 the destroyer was sunk by German E-Boats (like PT-Boats), during the invasion of Sicily off Salerno on the 11th of September, 1943. 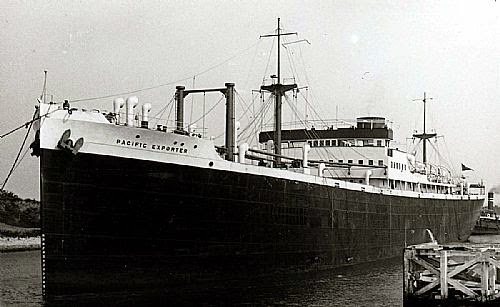 The British motor vessel British Exporter which rescued Steelmaker survivors on 29 April 1942.
Photo source: http://www.clydesite.co.uk/clydebuilt/viewship.asp?id=12806
The British Exporter was built as yard number 17 by Blythswood Shipbuilding Company of Scotstoun, Scotland in 1928, having been launched on 22 March of that year. She was 6,734 GRT, 435.9 feet long, 60.2 feet wide and 29 feet deep. Her owners from 1928 to 1952 were the Furness Withy and Company of London, under the banner Norfolk and North American Steam Navigation Company. In 1951 she was sold to the Costa Line of Genoa, Italy, which sold her to scrap on the 20th of October 1958.
Passenger Alfred James related how he and his fellow survivors remained in Morehead City receiving medical care for two days, until Saturday the 2nd of May, at which point he was reunited with his parents from New York. He planned to return on another mission soon.
Unbeknownst to the 46 other survivors, Radio Operator Harley A. Olson had a very lonely month. Not only did he manage to survive the sinking, but after devoting his time to trying to send out SOS messages, he arrived on deck to find that all of his crew mates had left him to his fate. Jumping into the water, he was able to cobble enough rafts together and gather enough supplies to last for over four weeks. He drifted about the wide Atlantic for 29 days until finally being sighted and rescued by an unknown Allied ship and taken to safe haven.
(This author is seeking more details on poor Olson’s plight).
SOURCES:
Clydsite.co.uk, http://www.clydesite.co.uk/clydebuilt/viewship.asp?id=12806for British Exporter information
Fold3.com – for the war diaries and deck logs and Eastern Sea Frontier and NOB Bermuda
Holm Lawson, Dame Siri, www.warsailors.com
Jordan, Roger, The World’s Merchants Fleets 1939, Naval Institute Press, Annapolis, MD, 1999
Mason, Jerry, www.uboatarchive.net, for ESF Frontier Enemy Action Diary reports
Mozolak, John, “New York Ships to Foreign Ports, 1939 – 1945,” http://janda.org/ships/
Newspaperarchive.com for the articles from the Associated Press
Uboat.net for much of the information, including photos of U-boat Commander and its victim, http://www.uboat.net/men
Wheelock, Anne, 2012 for the clipping of Alfred James’ survival account, www.isthmianlines.com/ships/sa_steelmaker.htm
Wikipedia.org for information on the Rowan, http://en.wikipedia.org/wiki/USS_Rowan_%28DD-405%29
Wrecksite.eu for specifications and history
Wynn, Kenneth, U-boat Operations of the Second World War, Volume 1 and Volume 2, 1997