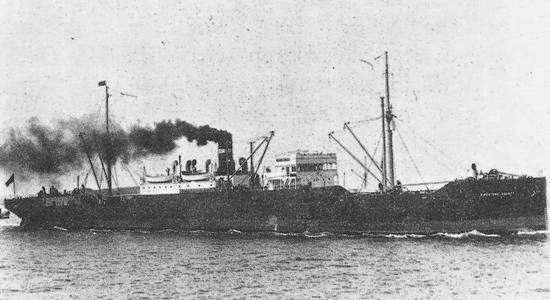 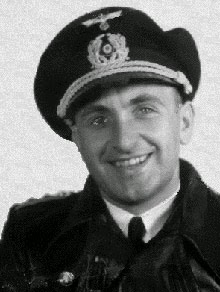 Kapitänleutnant Hans-Dieter Heinicke, who attacked and sank S.S. Pipestone County on 21 April 1942 from U-576. Over the course of his career he sank or damaged six ships of 34,907 tons. His submarine was sunk with him in it off the coast of Cape Hatteras on 15 July, 1942. He was 29.
Photo source: http://www.uboat.net/men/commanders/445.html
Heinicke held a conversation with Captain Hocken in what was described as poor English. He said he was sorry to have to sink their ship and asked after the cargo, destination, and name of their ship. Witnesses describe seeing eight men on the conning tower of the sub. The captain was considered in his early 30s and clean shaven. He asked a younger officer to do the questioning, and this officer was in his mid-twenties. A lot of the men were described as being boys in the 17-year-old range, with about 10-12 days’ worth of facial hair growth.
The conversation lasted 10-15 minutes Hienicke said, or communicated through the intermediary that he hoped they reached land, but that they were far away from it. He asked if anyone was wounded (they were not). Hienecke was described as 5’10” and 160 pounds, with light brown hair. He had on “what looked like an aviator’s helmet – wool or fur lined.” The other sailors were casually dressed, not in any discernible uniform. The Germans provided two eight-kilo tins of bread marked “KLEVE 8 kilograms” which were apparently Danish in origin was well as a kilogram of Danish butter.
Most of the American witnessed described seeing insignia which were not corroborated by the known emblems of the submarine. They mostly describe a “snorting bull,” or “either a laughing cow or laughing jackass stenciled in white on the dark grey conning tower.” Others described an  inscription along the barrel of the large gun on the U-boat. Some said it read ‘PIERMOLE”, other said “TRIDPOLLI”. As for the crest or emblem, in fact the symbol was of a lion holding a key, which is the coat of arms for Radevormwald, a German region. 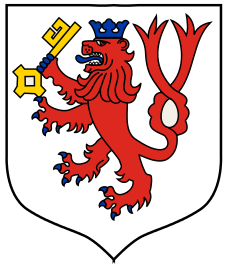 The coat of arms displayed on U-576, mistaken by Allied sailors for a snorting bull, when in fact it is the coat of arms of Radevormwald.
Photo source: http://www.uboat.net/boats/u576.htm
By the following day all four lifeboats had separated, indicating a lack of centralized control, given that many other lifeboats had managed to stay together in far worse weather, using a painter and signals from flashlights. Fortunately for the majority of the survivors they were found by the Norwegian motor ship Tropic Star the very next day, on Saturday the 22nd of April. At 5:00 pm Captain Anderson of the rescue ship came alongside to rescue the men. Then an hour later they managed to find the occupants of the second lifeboat and picked the up as well.
Together 23 out of a total complement of 37 were plucked from the seas and an uncertain fate This left one lifeboat of 13 men in it and 10 men in the fourth lifeboat waiting to be rescued. The Tropic Star either did not search for or did not find the remaining two boats. It proceeded to Boston, where it arrived on the afternoon of Friday the 24th of April, 1942. 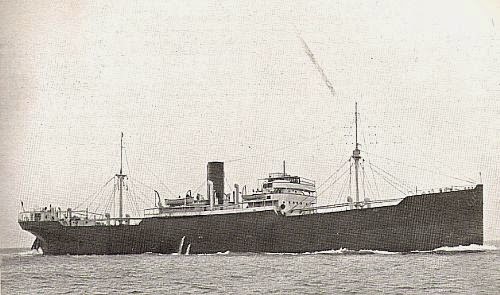 The motor vessel Tropic Star under the name Yomah, which she carried from 1926 until 1937. The ship rescued the majority of the Pipestone County survivors on April 24 1942 and took them to Boston shortly thereafter. She survived the war and was scrapped in 1961.
Photo source: http://www.clydesite.co.uk/clydebuilt/norway/
The motor ship Tropic Star was a Norwegian-flagged 5,088-tonner owned by Alf Jakhelln of Oslo. Her original name from when she was built by William Denny and Brothers at Dumbarton, Scotland in 1926. To 1937 she was the Yomah, then for the next decade the Ashburton. She could carry 8,455 tons of cargo, was 415 feet long, 52.3 feet wide and 25 feet deep. She was capable of 12.5 knots. The fleet was involved in the general tramping and petroleum trades globally. The vessel was scrapped in 1961.
The master of the Tropic Star was Captain Anderson. He commended Captain Hocken, noting that he “…was sitting up in the boat looking around and had refused to take cover down in the boat, although he was wet and cold.” During the voyage from where the Tropic Star picked up the Pipestone County and Boston, they fired upon a German submarine on the 24th of April – Friday – at 8:10 am.
According to Ensign Keathley, who took over the gunnery role aboard the Tropic Star, “…the periscope of a submarine was first sighted about 25 yards from the port side of the TROPIC STAR. The sub apparently crash dived and passed a few yards astern of the ship. We could see the bow wave. The alert was sounded and panic occurred among the survivors of the S/S PIPESTONE COUNTY. The crew of the TROPIC STAR acted better.”
This occurred when Nantucket was abeam about 65 miles to the west. The men fired at the periscope about half an hour later and thought they scored a hit. The ship sent an SSS signal via radio which was acknowledged ashore. She picked up speed and zig zagged until out of the danger zone. There were over ten witnesses to the attacks on the submarine.
It would be over two long weeks – 16 days – before the next group of Pipestone County survivors was rescued. At 10:17 am on Thursday May 7th the US Coast Guard cutter Calypso recorded in its deck log that “Coast Guard patrol plane sighted lifeboats with occupants 30 miles east of Oregon Inlet. From Elizabeth City Coast Guard Station by despatch. Calypso directed to scene.”
By 3:20 pm that day she was on the scene and reported “Picked up 12 survivors from torpedoed American SS Pipestone County. Boat at sea 16 days and separated from three other boats with the remainder of crew since first day. Condition of survivors goo except for two possible mental cases.” The same day the Calypso landed her charges at the US Navy base in Norfolk, Virginia.

USCG Calypso (WPC 104), which rescued 13 survivors of the Pipestone County on May 7th, 1942. She had also rescued 42 survivors of the SS Buarque on March 8th and 54 from the SS Arabutan, was well as 60 survivors of the USS Plymouth (PG 57) on August 5th, 1943.
Photo source: http://w4olf.com/wpc104/history.htm
The US Coast Guard Cutter Calypso (WPC 104) was built at Bath Iron Works in Maine and launched in January, 1932. She was commissioned two weeks later (16 January) and served the Coast Guard, rescuing innumerable mariners before during and after World War II, until she was decommissioned on 18 July 1947. Sold in 1955, she went into service ferrying passengers around Manhattan for the Circle Line, which she continued to do until late 2008 before being replaced.
The last group of 10 survivors had the longest to wait until rescue: 17 days, or until Friday May 8th. Fortunately for them this boat, which was led by Second Officer Reina, discovered an abandoned raft from a Panamanian ship at sea four days into their ordeal, on the 26th of April. They stripped the craft of water and food. Reina was not happy with his boat, however, stating that he actually put his thumb through the boat’s rotten hull and had to patch it with rages.
Then on the 30th of April at about 7:15 pm a PBY airplane spotted the survivors off Cape Hatteras. The plane signaled that help was on its way, and the men ate more of the rations than they usually would in expectation of imminent rescue. The following day a second PBY from Elizabeth City, North Carolina dropped them a US Navy parachute at the end of which was water and food.
When the realization set in that no immediate rescue was on the horizon, the men’s morale fell. One officer even stated that it would have been better not to have the false hopes raised at all. But the new water helped to offset the loss of water consumed in the expectation of soon rescue. Meanwhile the Gulf Stream pushed the boat further north for a week. Then at 4:00 am on the 8th of May they fired flares to attract the attention of a Canadian fishing schooner with an auxiliary motor, the Irene & May, of 94 feet. At the time they were off McCries Shoals, roughly eight miles from Cape May New Jersey, near the mouth of the Delaware River. This is apparently not far from Hereford Inlet.
It first the captain and crew of the Irene & May were concerned that the men in the boat represented some kind of Axis trap and called the US Coast Guard for advice. However my 5:30 am the fishing boat came alongside the lifeboat. By then there was a US Navy blimp circling overhead as well. The Irene & May interrupted their fishing to take the 10 survivors ashore at the Cape May Naval Air Station. By 1:30 pm efforts were made to repatriate the two Navy Gunners from Gun Crew 28E, Brooklyn, but they – J. L. Giannotti and L. D. Greene, were told to remain in Cape May. 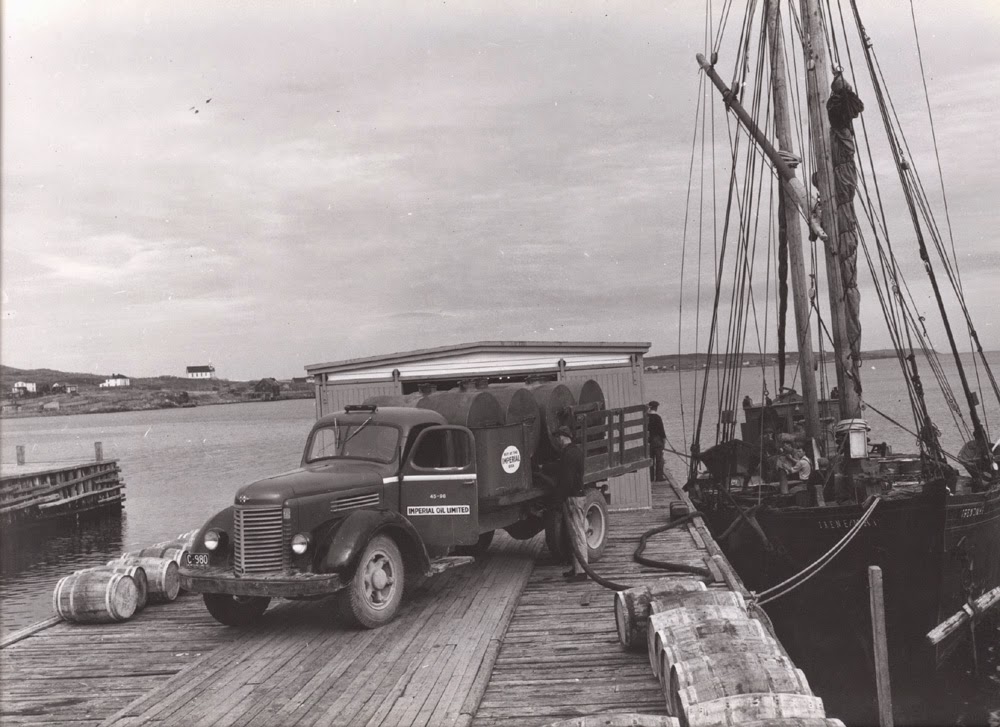 The fishing vessel Irene & May “tied up at wharf, with Imperial Oil truck delivering fuel, 1948”. In Canada, from the Memorial University library archives
Photo source: http://www.library.mun.ca/qeii/cns/photos/cnsphoto2402005.jpg
The fishing vessel (F/V) Irene & May was built in Essex Massachusetts in 1901 as a schooner of 94 feet length overall. By 1920 she was owned by Maude E. Morris of Nassau, Bahamas. In 1926 she was sold to Mark Sheppard of St. John’s Newfoundland. By 1940 it was still owned by Mr. (or Captain) Sheppard, and was registered at 89.8 tons with an auxiliary engine installed.
SOURCES:
Clydebuilt Ships, for information on the Tropical Star, http://www.clydesite.co.uk/clydebuilt/norway/
Fold3.com – for the war diaries and deck logs and Eastern Sea Frontier and NOB Bermuda
Holm Lawson, Dame Siri, www.warsailors.com
Jordan, Roger, The World’s Merchants Fleets 1939, Naval Institute Press, Annapolis, MD, 1999
Mason, Jerry, www.uboatarchive.net
Mozolak, John, “New York Ships to Foreign Ports, 1939 – 1945,” http://janda.org/ships/
Newspaperarchive.com for the articles from the Associated Press
Ship Index for information on the Irene & May, http://www.shipindex.org/ships/irene_and_may and http://www.crewlist.org.uk/data/vesselsnumview.php?OfficialNumber=139509
“Survivors Statements,” from NARA, in Washington DC, as found by Michael Constandy, westmorelandresearch.org. Formal citation: Survivor’s Statements (1941-1942) Series : Papers of Vice Admiral Homer N. Wallin, compiled 1941 – 1974.  Record Group 38: Records of the Office of the Chief of Naval Operations, 1875 – 2006  Entry P-13.  National Archives at College Park – Textual Reference (Military) 8601 Adelphi Road, College Park, MD 20740
Uboat.net for much of the information, including photos of U-boat Commander and its victim, http://www.uboat.net/men
Wrecksite.eu for specifications and history
Wynn, Kenneth, U-boat Operations of the Second World War, Volume 1 and Volume 2, 1997