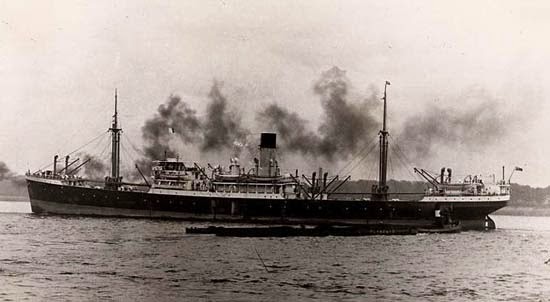 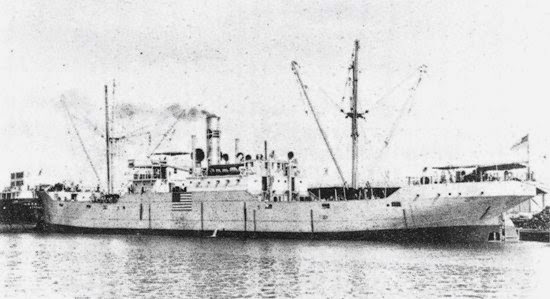 The US-flagged steamship Plow City, which fled Captain Shaw of the Peisander’s lifeboat thinking it was a submarine, only to be torpedoed and sunk by U-588 under Victor Vogel that same day
.
Photo Source: Steamship Historical Society, www.sshsa.org, and http://www.uboat.net/allies/merchants/ships/1694.html
After dawn on Thursday the 21stof May, their fourth day in the boats, the men sighted the 3,282-ton American steamer Plow City. The ship was en route from Port of Spain Trinidad to New York with 4,971 tons of bauxite ore. At 7:30 am the ship was four miles away, but the Peisander men were able to row two miles towards it. They tried to transmit a Mayday message by the small wireless set, but it was not received.
Half an hour later the lifeboat and ship were only two miles apart when suddenly the Plow City changed course away from the boat and sent a “SSS” or submarine sighted message along with their position. Captain Shaw was able to record his position and verify his navigation. The Plow City was sunk at 2 pm that day by U-588 under Kapitänleutnant Victor Vogel.
Using the Plow City’s position, Shaw determined that they were 220 nautical miles west-northwest of where the Peisander sank, and 140 nautical miles south of Nantucket. Given the dangers of the notorious Nantucket shoals, he opted to navigate towards Cape Cod instead. The night of the 20th and the morning of Friday the 21st of May they again broadcast their position with no reply. The weather became very rough and they were forced to ride out the gale with a sea anchor.
On Friday the 22nd May morale was low due to the crew having been continually soaked to the skin. The Chief Steward came up with a bottle of rum which was shared around. They kept trying to send a distress message, but Shaw became convinced that “….by this time I could have shouted ashore with a megaphone more successfully.” As he had predicted, after they passed north of the Gulf Steam fog and heavy seas set in. On Saturday the 23rd of May Captain Shaw decided that given the proximity to land he would share out the food by “giving them as much of the boat’s rations as they could eat and consoled them again with a small quantity of rum.”
Sunday the 24th of May at 9 am the men in the boat saw and heard breakers on the port bow, to the northwest. Deducing correctly that they had drifted south onto Nantucket Shoals – infamously dangerous – Captain Shaw shaped a course to the northeast for eight miles. At 5 pm that day two planes saw them and circled around the lifeboat. The fog set in thickly then darkness enveloped them, so Shaw decided to anchor and await rescue.
At daylight on Monday the 25thof May the planes returned and advised the Peisander men to remain anchored. They also dropped supplies in two packets, which were retrieved. They contained First Aid supplies, eight cans of tomato juice which were very popular, American pemmican which was vastly preferred over the British variety, and chocolate. By now liquids were all that the Second Steward could swallow, his teeth had become so painfully bad.
Finally at 11 am on Tuesday the 26thof May the fog cleared enough for the patient survivors to be rescued. The boat had made it 300+ nautical miles northwest of the Peisander sinking and to within ten or so nautical miles of Siasconset village, Nantucket when they were discovered by the US Coast Guard Cutter General Greene (WPC 140). They were landed in the town of Nantucket later the same day, but not without some excitement for the rescuers, who had attacked a suspected U-boat en route to the Peisander survivors. The events are related by the official US Coast Guard website:
“On 25 May 1942 she responded to a call for assistance from the torpedoed British freighter SS Peisander in a dense fog off Nantucket Shoals.  As the cutter approached a lifeboat with the freighter’s survivors aboard, a lookout sighted a U-boat crash diving across the cutter’s bow.  The cutter first tried to ram the submarine but did not arrive before the submarine slipped beneath the waves. The General Greene then acquired the U-boat on sonar and closed. She dropped three depth charges on the contact which produced an oil slick some 400 feet in diameter. The cutter was unable to regain sonar contact and returned to rescue the 18 survivors.”
The Eastern Sea Frontier Enemy Action and Distress Diary records that at 9:55 am, when 32 nautical miles east of Nantucket the General Greene sighted the submarine. At 10:13 am she reported herself as “engaging sub.” Three depth charges were dropped, but two did not explode initially. After one exploded it is believed however to have set off another of the depth charges. The report concludes that “Oil came to the surface, and a sub may have been sunk.” There is no corroborating report of a German U-boat being in those relatively shallow waters at that time.
The same report says that the Peisander men were picked up at 6:30 pm that day, however Shaw says it was closer to 11 am. He writes “At 1100 on the 25th the fog cleared and all the crew were taken on board a U.S.coastguard vessel GENERAL GREENE about 20 miles E.N.E. of Nantucket Island. We were treated very well on board the coastguard vessel and those who required medical treatment were attended to.” 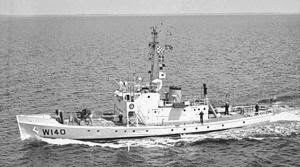 The US Coast Guard Cutter General Greene (WPC 140), was named after a Revolutionary War hero. It served from 1927 to 1968. She rescued the first lifeboat of Peisander off Nantucket and towed their lifeboat to Newport, Rhode Island, a major US Navy base at the time.
Photo Source: http://en.wikipedia.org/wiki/USCGC_General_Greene_(WPC-140)
Meanwhile the other two boats had experienced an exciting voyage. According to the US Coast Guard Auxiliary history, “…lifeboats 4 and 6 (22 and 21 survivors respectively) were located and towed in by CGR-37 and a CG lifeboat from Maddaket Station.” The story was more colorful that just that, though. According to Professor John R. Stilgoe in his emintently readable study entitled “Lifeboat,”:
“At three in the morning of May 24, 1942, an Able-Bodied seaman in Lifeboat Number 2 of the torpedoed British freighter Peisander heard what he thought might be a cow mooing. He woke F. A. Brown, first officer of the steamship and commanding the boat, who soon discovered the sound to be that of surf breaking on Nantucket Island beaches. A few hours later, trailing a pail astern on a line to slow their progress through the surf, the castaways aboard the double-ended life-boat arrived on the sand unharmed after six days, fourteen hours at sea, having navigated some 340 miles.” 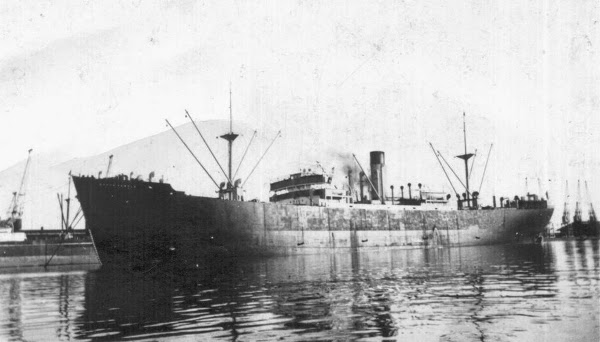 The steam ship Baron Semple at Newport, Wales, on the 1st of September 1939, days before World War II broke out. This ship stopped to rescued men from two boats from the Peisander, however as the ship was sailing for South Africa, its services were politely turned down.
Photo Source: Alexander Macvicar, http://www.uboat.net/allies/merchants/ships/3123.html
On Wednesday the 20thof May the 4.573-ton British steam ship Baron Semple came across two of the Peisander’s lifeboats and offered to take the men aboard, even though it would have been a challenge to feed, house and clothe the 43 men. The Baron Semple was built in 1939 by C. Connell and Company Limited of Glasgow. Her skipper was Captain Philip Jarvis Carnie. The vessel’s owners were H. Hogarth and Sons, Limited, also of Glasgow.
After giving the offer some thought the Peisander men weighed the fact that “the survivors were fit and well and the weather was very good and the possibility of being seen very soon. They told Baron Semple – “Thank you, but we stay where we are” (Mayes). It was, according to Stilgoe, “…a decision which surprised everyone aboard the steamship.” (p.217, “Lifeboat”).
The First Naval District noted that Nantucket Coast Guard reported the arrival first of a lifeboat with 28 men in it, “mostly Chinese,” from the Peisander had landed on that island. The life boat was described as being 45 feet, which seems extraordinarily long, (but might explain why it was later towed to Newport Rhode Island some 70 miles away). The Nantucket station said that airplanes had made contact with another lifeboat off Nantucket at 5:50 am on Monday the 25th of May. At 7:10 pm two other boats were observed 30 nautical miles east of Nantucket, presumably by airplanes as well. 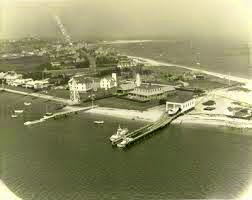 The US Coast Guard station at Brant Point, Nantucket Harbor, c.1968. This is where all 61 men from Peisander’s three boats were assembled by three Nantucket rescue vessels before they were towed to Newport Rhode Island on the 26th of May 1942.
Photo Source: Kenrick A. Claflin & Son Nautical Antiques Online Catalogue, http://lighthouseantiques.net/nantucket.htm
The General Greene was a 125-foot patrol boat built by the American Brown Boveri Electric Corporation of Camden, New Jersey in 1927. She was 23.5 feet wide and 7.5 feet deep with twin engines giving her 13 knots. Once she had taken the Captain’s boat ashore in Nantucket it hitched together all three boats and towed them to Newport, Rhode Island, roughly 70 nautical miles to the west, where she arrived in the afternoon of Tuesday May 26th.
Captain Shaw seems quite proud of the derring-do exhibited by the men in the other boats. He wrote that “….the crew of the other two boats, which had kept together, could have been rescued much earlier by the BARON SEMPLE, which was going to South Africa. They decided, however, that it would be much more unpleasant being landed in South Africa than having an adventure in a lifeboat in the open sea with the hope of ultimately landing on the American Coast.” In November 1942 Captain Shaw was honored by a King’s Commendation for “…brave conduct when their ships encountered enemy ships, submarines, aircraft or mines.”
Moving northeast Feiler in U-653 was able to refuel from U-459 about 500 miles northeast of Bermuda before returning to Brest, where it was based with the 1st U-boat Flotilla. The patrol had begun on the 25th of April and ended on the sixth of July, 1942. Over seven patrols in the same sub for 412 patrol days he managed to attack five ships worth 9,382 tons – less than stellar results when compared with his colleagues in the same timeframe (December 1941 – September 1943). He was awarded the German Cross in Gold in 1944. Gerhard Feiler lived until 1990.
SOURCES:
Fold3.com – for the war diaries and deck logs from both US and UK Admiralty sources
Holm Lawson, Dame Siri, www.warsailors.com
Jordan, Roger, The World’s Merchants Fleets 1939, Naval Institute Press, Annapolis, MD, 1999
Mason, Jerry, www.uboatarchive.net, for the KTB or war diary of the U-boat, in German
Mayes, Stanley, blog post at www.shipsnostalgia.com/archive/index.php?t-29448.html.
Newspaperarchives.com – for a selection of largely uncensored articles on the Norland, 1942
Stilgoe, John R., “Lifeboat”, University of Virginia Press, pages 216-218
Supplement to the “London Gazette,” 10 November 1942, HM Stationary Office
“Survivors Statements” from NARA, in Washington DC, as found by Michael Constandy, www.westmorelandresearch.org. Formal citation: Survivor’s Statements (1941-1942) Series : Papers of Vice Admiral Homer N. Wallin, compiled 1941 – 1974.  Record Group 38: Records of the Office of the Chief of Naval Operations, 1875 – 2006  Entry P-13.  National Archives at College Park – Textual Reference (Military) 8601 Adelphi Road, College Park, MD 20740 – Note: in this instance the information gleaned from this report on Opawa was extremely meager.
The National Archives, UK, Kew Gardens – for the official narrative of the loss by British officers, kept in Admiralty archives there.
Uboat.net for much of the information, including photos of U-boat Commander and its victim, http://www.uboat.net/men
United States Coast Guard official website, for the rescue of Peisander men by the CGC Genera Greene – see http://www.uscg.mil/history/webcutters/GeneralGreene1927.asp
U.S. Coast Guard Auxiliary History, for Peisander’s 2 other boats’ rescue off Nantucket, see http://www.history.auxpa.org/collections/textarticles/article0002.htm
Wrecksite.eu for specifications and history of Peisander: http://www.wrecksite.eu
Wynn, Kenneth, U-boat Operations of the Second World War, Volume 1 and Volume 2, 1997