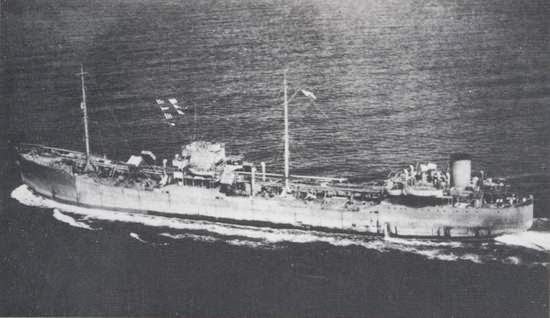 The British motor tanker Opalia which Reinhard “Teddy” Suhren claims to have sunk but which escaped largely unscathed.
Photo Source: http://www.uboat.net/allies/merchants/ships/1341.html
The British motor tanker Opalia was built as hull number 67 by the Nederlansche Dok Maatschappij NV (NDSM) of Amsterdam in 1938. Weighing 6,195 gross registered tons, in 1942 she was owned and operated by the Anglo-Saxon Petroleum Company Limited of London – a subsidiary of Shell Oil. She was 440.9 feet long, 54.3 feet wide and 31 feet deep. Her keel was laid on the 17th of July 1937 for the Batavian Petroleum Corporation N.V. of Den Haag, Netherlands.
In mid June 1938 the Opalia visited Galveston Texas on its maiden voyage and made headlines in the “Daily News” of 10 June as exhibiting the “latest features in shipbuilding.” The tanker was in Texas City to load gasoil as part of its first laden passage, having arrived from Rotterdam in ballast. She is toasted as the “newest tanker in the Royal Dutch Shell fleet.” She was launched March 5th, 1938. Her engines were Werkspoor super-charged 6-cylinder Diesels with 2,800 brake horsepower – speed which would serve her well in a battle with a German U-boat less than four years into the future.
Capable of 12 knots (she crossed the Atlantic to the US Gulf in 18 days) and of carrying roughly 9,000 tons of cargo, Opalia also boasted the best in accommodations. Her Captain, G. P. Gruzelier at the time, lived and worked in quarters “equal in size and conveniences to those of a first-class hotel.” The officers quarters “are finished in oak and are unusually commodious. The officer’s dining salon is attractively decorated and has on its walls paintings of the Dutch type. There is… an officers’ smoking room aft, containing a sizeable library.” The article continues that “She is named for a type of seashell, the Opalia, which is found in the Mediterranean, and also like other tankers in the company, she has two specimens of the type of shell for which she is named in a glass case embedded in the wall of the officer’s dining salon.”
During World War II the Opalia was busily employed in convoys supplying the United Kingdom with much-needed oil. In that capacity she appears in UK Admiralty and (later) in US Navy reports. On the 18thof November 1940 the tanker was damaged by German aircraft while in convoy to Methil, Scotland. One man was injured and the ship only slightly damaged. This was extraordinarily lucky since “approximately ten dive bombing attacks then took place.” Another ship in the same convoy, S.N.A. 8 had five men killed and eight wounded and had to be towed to port by HMS Campbell.
On the 8th of June 1941 “sailed empty for Curacao” apparently from Bermuda. On the 2nd of April 1942 she left Convoy ON 79 in fog, and struck out for Curacao again on her own. Naval officials tried to have her proceed to Halifax instead. On September 20th1941 the Opalia sailed out of New York Harbor.
By February 1942 Captain Gruzelier had relinquished command to Captain Percy Douglas Seear. The Second Officer was John Edward Frankland and the Chief Engineer Arthur Morgan Evans. James Howell Row was a Deck Apprentice and Michael Carroll was a Royal Navy DEMS (Defensively Armed Merchant Ships) Gunner.
On Monday the 16th of February 1942 the Opalia was 325 nautical miles north of Bermuda and 285 nautical miles southeast of Nantucket Island in the US. She was on a laden voyage from Curacao to Halifax and then Iceland, presumably with fuel for that Allied outpost’s aircraft and ships, which were involved with protecting and helping shepherd convoys both ways across the Atlantic
.
On that day U-564 under the command of KorvettenkapitänReinhard Suhren came across the tanker. Three days earlier Suhren had suffered an embarrassing and mutually disabling collision with his compatriot submarine U-106 under Harald Gelhaus off Hatteras. The collision, caused by Suhren’s miscalculations of distances and sea state, ruptured U-106’s fuel tank and bent closed four of U-564’s forward torpedo tubes, without which the sub’s attack capabilities were severely curtailed (Suhren still had stern firing capability).
One month into a 48-day patrol the U-boat had also expended some of its deck artillery in the sinking of the Canadian tanker Victolite on the 11th of February, two days before the collision. So Suhren approached the Opalia with one hand figuratively tied behind his back. In his war diary or KTB (Krieg Tag Buch), Suhren recorded:
“15.57 [German time] A smoke cloud in sight bearing 67°T, a tanker.  Maneuvered ahead with the intention of attacking him with the remaining 83 shots of ammunition.
19.45 Dived. Surfaced when the tanker was abeam, at a range of 1500 meters and began artillery combat.  Tanker was armed with 3 cannons.
20.38 Running battle with E-supplement [use of E-motors and diesels together]. The tanker turned away after the first salvo and shot repeatedly with his stern cannon.  His first impacts were short about 200 meters. With the help of the E-supplement, his subsequent shots, as usual with the English, were on the short side without regard to the E-supplement. Own impacts were all far, although after the 7th shot a range of 0 was set. By procedure the First Watch Officer allowed no short shots with the top gun sight. Only at a distance of about 500 meters was the first hit achieved, but also the ammunition ran out.
21.30 Must let the still shooting tanker go.
22.45 Tanker out of sight on SE course to Bermuda.”
Apparently the Opalia turned away from its destination of Halifax and made for Bermuda instead. Since it has not been possible to locate the ship’s log or the War Diary for Naval Operating Base Bermuda for the week of February 16th 1942, it is not known if the ship resumed its course for Halifax once Suhren and U-564 broke off the chase. 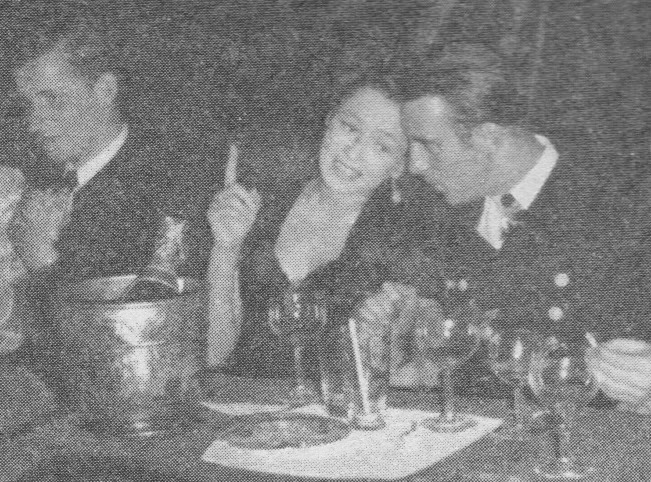 The caption for this photo, showing U-564 skipper Teddy Suhren on the right, is “Pati Behrs (later a film-star in the US) with Suhren and others at the Scheherezade Club in Paris.”
Photo Source: “Ace of Aces,” by Teddy Suhren, page 124
What is known is that Suhren expended his last “83 rounds from the 88mm deck gun. Only three hits were scored, which damaged the tanker only slightly” (Uboat.net). Also an SSS for “submarine attack” wireless message was sent by the Opalia, picked up on shore and relayed to the US Navy central command. At 2:30 pm Eastern Standard Time the Enemy Action Diary of the Eastern Sea Frontier (www.uboatarchive.net) states that:
“SSS from OPALIA (6,200-ton English tanker) in 37-38; 68-07W. being shelled by submarine. At 1515 position 37-41N; 66-20W. being chased by sub. C162207 intercept at 1940 GMT sub last seen on surface broadside to.” The British Admiralty also duly noted that “At 1850 G.M.T. the British Tanker OPALIA reported being shelled by a submarine in 37.38’N, 60.7’W, at 1915 G.M.T. she reported being chased.”
Although nowhere in the war diaries of the German commander (Suhren), the US Navy, or the British Admiralty, was it claimed or stated that the Opalia was sunk, in his 2006 autobiography Teddy Suhren (amazingly) claims just that. On page 120 of “Ace of Aces: Memoirs of a U-Boat Rebel,” he writes: “Despite being able to sink the British tanker Opelia [sic] (6,000 tons) by gunfire three days later [after 13 February 1942, in other words on the 16thof February], the whole expedition had nevertheless been a waste of time.”
In fact the Opalia continued sailing and carrying her urgently needed oil cargoes across the Atlantic and beyond. She would leave New York seven times in 1943, three times in 1944 and once in 1945. Doubtlessly she took part in dozens of convoys and saw her share of action during the war. Following World War II her career was no less interesting. In 1956 Opalia was sold to the Egyptian government and the nearly 20-year-old vessel was renamed “23 December.”
According to blogger Kees Helder, on the 6th of November the vessel was set alight in Port Said during the Suez Crisis. In April of 1959 she was once again floated and by 1961 was sailing under the Egyptian flag. In 1967 – now nearly thirty years old – she was sold to a Mr. Mohamed Nawar and re-named the “Nawar”. According to Uboat.net the ship was scrapped in 1978, and to Mr. Helder she was deleted from registries in 1987. In any event the Opalia lived a largely charmed and colorful life, notwithstanding that she survived to deprive Korvettenkapitän of bragging rights.
SOURCES:
Fold3.com – for the war diaries and deck logs and Eastern Sea Frontier entries
Galveston (Texas) “Daily News,” Friday June 10, 1938: new Shell Tanker Comes Here on Maiden Voyage, Motorship Opalia Has Latest Features in Shipbuilding,” under News of Ships and Shipping column, page 1.
Helder, Kees, for photos of Opalia and crew names, http://www.helderline.nl/tanker/745/opalia+(1)/
Jordan, Roger, The World’s Merchants Fleets 1939, Naval Institute Press, Annapolis, MD, 1999
Mason, Jerry, www.uboatarchive.net for the English translation of U-564’s KTB war diary
Mozolak, John, “New York Ships to Foreign Port, 1939 – 1945,” http://janda.org/ships/
Newspaperarchive.com for the Galveston Daily News article of June 10, 1938
Suhren, Teddy, with Brustat-Naval, Fritz, “Ace of Aces: Memoirs of a U-Boat Rebel,” Translated by Frank James, Naval Institute Press, Annapolis, 2006
Uboat.net for much of the information, including photos of U-boat Commander and its victim, http://www.uboat.net/men
Wrecksite.eu for specifications and history, http://www.wrecksite.eu
Wynn, Kenneth, U-boat Operations of the Second World War, Volume 1 and Volume 2, 1997

One comment on “M/T Opalia attacked by U-564/Suhren N of Bermuda Feb 42: Claimed to have been sunk but later used as Suez Crisis blockade ship”