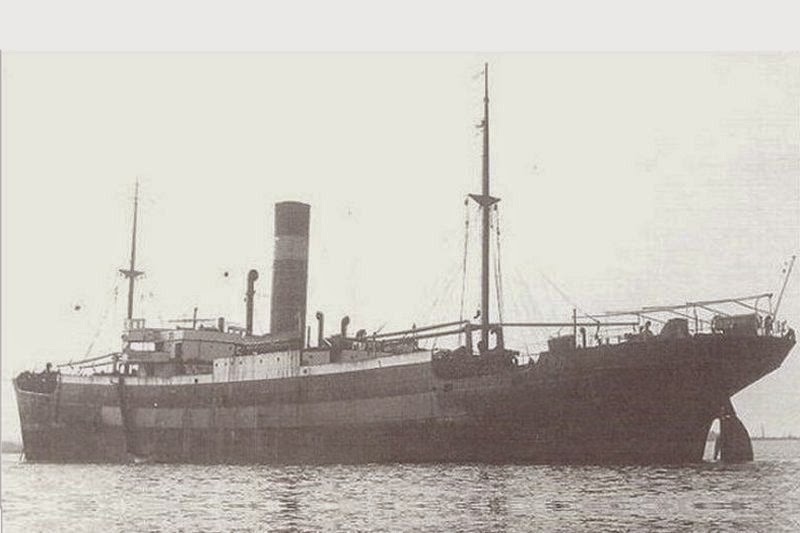 SS Halcyon under her previous name of SS Sirrah. Note the two masts and large funnel. The ship is in ballast when this photo was taken and you can see how high she rides up in the water by the exposed rudder aft.
Photo source: http://www.shipmotions.nl/RDM/RDM/RDM-062.html
The Panamanian steam ship Halcyon was built as the Dutch ship Sirrah in 1917 and launched on 31 March. Completed in November, the builders of both the ship and her engines were the Rotterdamsche Droogdok Mij. N. V., Rotterdam Drydock Company, or simply RDM. The ship’s dimensions were 373 feet long, 50 feet wide, and 24.5 feet deep. A single triple-expansion, three-cylinder engine developed 1,600 horsepower (ihp), and propelled the steel hull at 10 knots. The ship was 3,530 gross registered tons (listed in places at 3,531 tons). The yard number was 62, and her call sign was HPKT. Her cargo carrying capacity was 6,293 deadweight tons.
The ship’s original owners were the Van Nievelt, Goudriaan and Company’s Stoomvaart Maatschappij. Between 1918 and 1919 the Sirrah was confiscated from the Dutch by the United States government, then presumably returned. In 1939 the Goulandris Brothers of Piraeus Greece acquired the ship and renamed her Halcyon. They formed the Halcyon Steamship Company of Panama and placed another ship, the Cygnet, in the same firm. On March 11 the Cygnet was attacked and sunk by the Italian submarine Enrico Tazzoli four nautical miles from Dixon’s Hill, San Salvador Bahamas. All 30 Greek officers and crew survived. So perished the only remaining flagship of the firm’s fledgling fleet.
During World War II the Halcyon called at US ports several times, and at New York specifically on May 2nd 1940, July 20th 1940, and December 30th 1940 s well as on January 17th 1941 and June 9th 1941. On 27 September 1940 she is reported to have struck a mine off Middlesbrough, 2.5 miles from Sough Gare England. The damage is reported by the Admiralty to have put the ship in “no immediate danger.”
On Monday the 2nd of February 1942 the ship proceeded from Halifax Nova Scotia to Georgetown, British Guyana on the northeast coast of South America. For the voyage down the Halcyon carried 1,500 tons of ballast. In Guyana she was to load bauxite, one of the ingredients of aluminum which was widely used by the Allies to manufacture aircraft.
There were 30 merchant marine officers and men aboard the Halcyon, led by Captain Peter Petrone. Most, if not all, were Greek nationals. One of the men, named simply Glitsos, was a Third Assistant Engineer and was 70 years of age. As the men anticipated the midnight watch on Thursday the 5th of February the ship had already plodded 650 nautical miles south of Halifax and was only 300 nautical miles east-northeast of Bermuda. In over 15,000 feet of water a torpedo from the German submarine U-109 streaked toward the side of the ship.
U-109 was under the command of Korvettenkapitän Heinrich Bleichrodt, aged 32 at the time. At 2:25 pm local time (Eastern Standard plus one hour), Bleichrodt was waiting to transfer fuel from U-130 and his colleague Ernst Kals. What first appeared as a puff of smoke soon materialized into a ship with two masts and a “wide, high funnel,” – a description fitting the Halcyon. Informing Kals, Bleichrodt set off in pursuit. It was to be a long running, one-sided attack lasting over nine hours.
Though there was a long swell from the northwest, visibility was very good, and within an hour the ship could be seen from eight miles away, sometimes zig zagging 20 degrees from a base course of 180 degrees south. Bleichrodt over-estimated the Halcyon’s speed at between 10 and 11 knots. The U-boat skipper decided to dive and make an attack at twilight, several hours away. Though dark rain clouds sometimes obscured his quarry, the skipper kept the merchant ship in his periscope sights. A few minutes after 6:00 pm local time, as darkness descended quickly, Bleichrodt waited for the Halcyon to steam into range of his torpedoes and fired from tube one from a distance of 2,000 meters or 6,600 feet, set for a depth of just under ten feet. The torpedo missed.
Bleichrodt and his men heard the torpedo continuing its futile run for a further ten minutes. The commander realized that Halcyon was in ballast and thus presenting less of an underwater target, as more of the hull was out of the water, and also that the ship was only making 8-9 knots, not 10-11. At 6:29 pm the sub surfaced 4,000 meters behind the Halcyon and ran alongside the ship about 4,500 meters in order to measure the speed. Both the torpedo and sub remained undetected by the 30 Greek officers and men aboard the ship, as the night was by now dark. 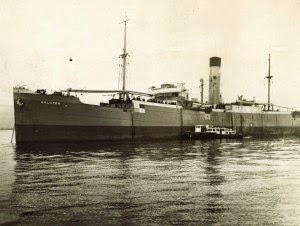 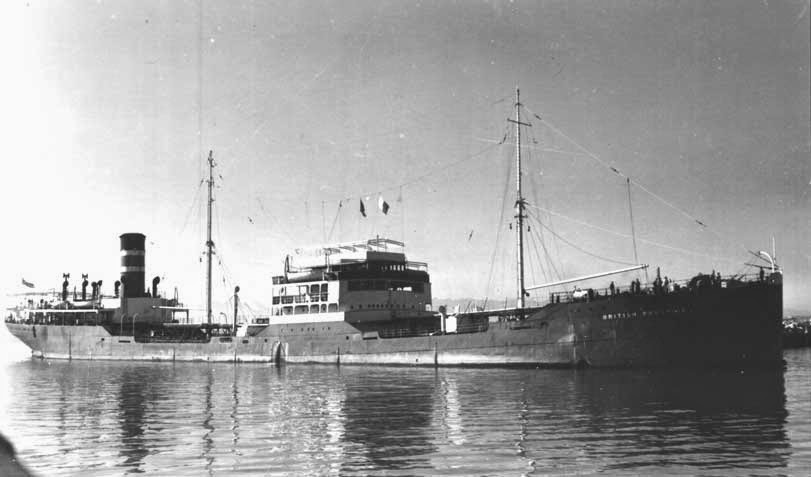 Photo of the British tanker British Prestige during World War II.
Photo source: www.benjidog.co.uk/allen/Images/Images%20B/BPTNK140.jpg
Grahame Soar’s father was an Army Gunner aboard the British Prestige at the time. Father related to son the events of 6 February 1942, and this is what the son, Graham, recorded: “It was at 5am when a sailor on watch came and woke me up to say that an aeroplane was about and Captain wanted all guns manned. We saw nothing and at 7am the Mate said to erect Machine Guns. This was done. At About 8am the aeroplane came again and morsed to us and the Captain told us to keep a sharp look out for wreckage. He also got out all the wires and towing ropes and we all understood that we were to tow another ship.”

“However later the aeroplane circled again and told us the course to pick up survivors. He dropped a smoke flare and we could see a Lifeboat ahead. We manoeuvered the ship and took 9 men aboard – the Captain, Mate and seven others. This boat had been shelled at and damaged to the boat had been repaired. Two men were killed and buried at sea. There were three others injured, one with stomach wounds and one with foot wounds. Everybody was running around themselves.” The men who were injured by shrapnel were the Chief Officer, Second Engineer, and a sailor.

“Apparently the ship was shelled by a submarine on the surface at 11pm Thursday night. Our Sparks picked up the SOS. And then the submarine shield the lifeboat. Having got these men aboard the aeroplane signaled again and dropped another flare and after an hour we sighted another boat. This was an all-metal boat with 14 men in it.” This boat as in the charge of the Chief Officer.

We got these on board and cut the lifeboat adrift. Then thinking we had all we told the aircraft we were on our way but he signaled again and again dropped a flare. This time it was two men on a raft. We managed to get alongside and one man scrambled aboard, the other an old man of 73was not so nimble. He managed to claw a ladder and was holding on with his hands and men were pulling in the ladder with him on it. Another man went on the ladder to hold his wrists but he was gradually slipping away. Another fellow named A. Smith leaned over the side to give a hand but unfortunately the old man let go. Smith immediately went in after him and everybody was running around throwing overboard lifebelts. Smith swam to one and gave it to the old man and swam around him and generally comforted him.

Meanwhile the Mate gave orders for the Jolly Boat to be lowered and all hands assisted. It was not long before they were rescued and the boat hauled in. Meanwhile, the aeroplane circling again dropped yet another flare and Morsed to us. Again we followed and passed considerable wreckage and then saw one man on a raft. He turned out to be the Indian Fire man and as we could not manoeuver ship near enough we lowered the Jolly boat again and took him onboard. We understood this left one man unaccounted for. The aeroplane went away and we returned to our course. There was a general post on the ship to find accommodation for all and by nightfall everybody was suited. The name was

HALCYON and we understand the submarine was on the surface even up to the time that the aeroplane was sighted by us.”
The 27 men landed in Halifax on Tuesday the 10th of February where the three injured men were placed in hospital. The survivors were interrogated in order to establish that they were attacked by a submarine and not an armed raider after all.
The British Prestige was scrapped on the 29th of February 1956 by T. W. Ward Limited at Briton Ferry in the UK.
SOURCES:
Bang, Simon photographic collection, http://7seasvessels.com/?attachment_id=53138
Busch, R. and H.-J. Röll, German U-boat Commanders of World War II, 1988, Franz Kurowski, Knights Cross Holders of the U-boat Service
Fold3.com for US Navy and UK Admiralty reports of the rescue and interrogation of survivors.
Jordan, Roger, The World’s Merchants Fleets 1939, Naval Institute Press, Annapolis, MD, 1999
Mason, Capt. Jerry, http://www.uboatarchive.net/KTB109-4.htm for translated KTB for U-109
Mozolak, John, for the details of when the Harpagon sailed from New York in WWII: http://janda.org/ships/
Shipmotions Netherlands, http://www.shipmotions.nl/RDM/RDM/RDM-062.html – photo and details of the Sirrah and Halcyon
Uboat.net for much of the information on the Halcyon, survivors, including photos of U-boat Commander and its victim, http://www.uboat.net/men
Wrecksite.eu for specifications and history of Halcyon as well as Grahame Soar’s account of his father and colleagues rescuing Halcyon survivors. http://www.wrecksite.eu/wreck.aspx?132151#157810
Wynn, Kenneth, U-boat Operations of the Second World War, Volume 1 and Volume 2, 1997