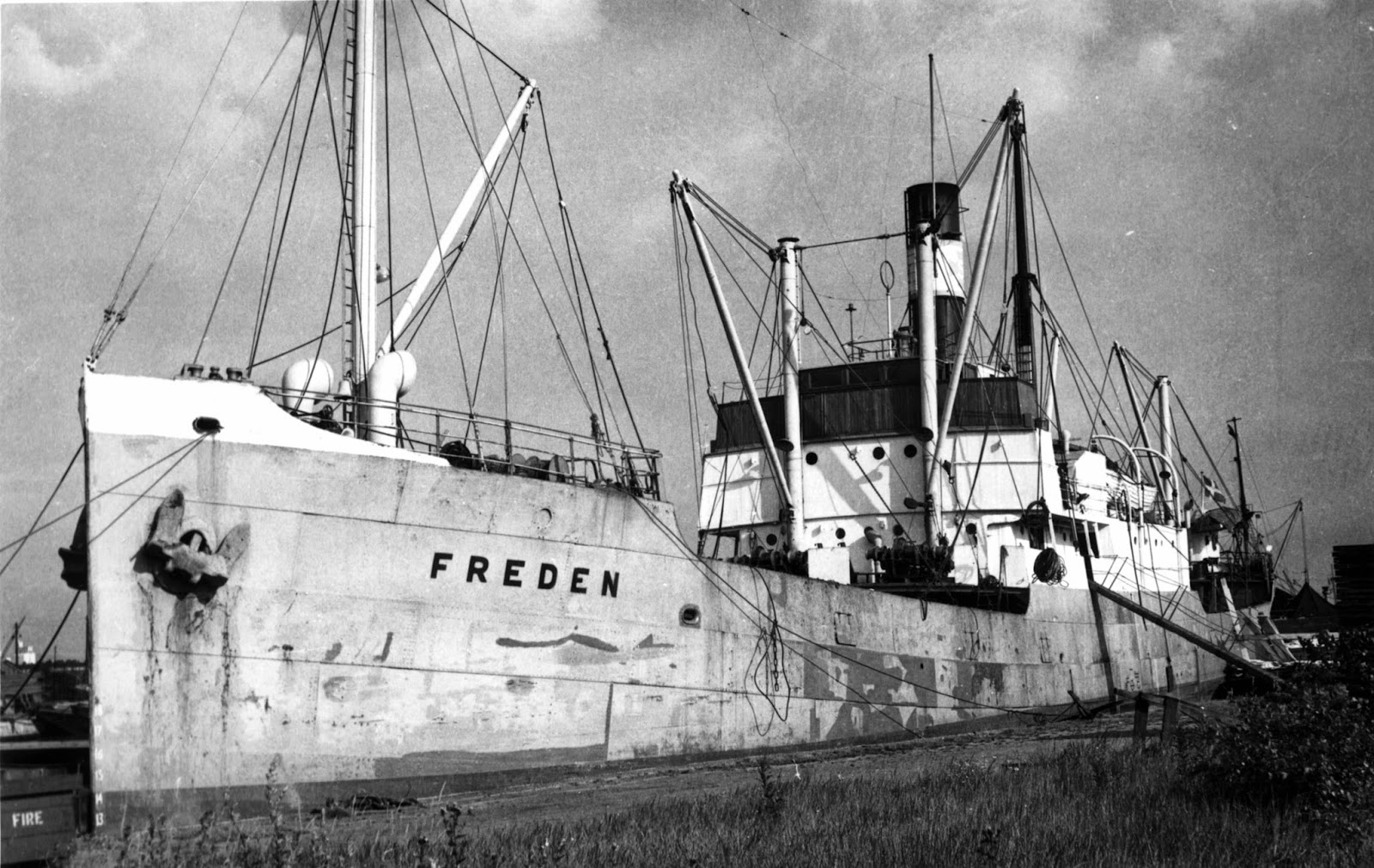 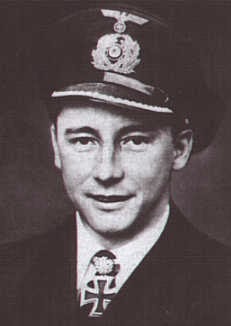 Kapitänleutnant Adalbert Schnee, commander of U-201 during the Freden attack. Credited with attacking 26 ships of over 125,000 GRT tons, he went on to be awarded the Knights Cross with Oak Leaves, one of the Kreigsmarine’s highest honors. He began his naval career on the cruiser Leipzig in 1936 and ended it in late April 1945 aboard the new diesel-electric submarine U-2511.
Source: http://www.uboat.net/men/schnee.htm
According to the KTB or war diary of U-201 under Adalbert Schnee, the torpedoes were fired at or between the following coordinates CA 9831 35°39’00″N, 069°26’00″W which is a mere seven nautical miles from where Freden reported her attack (34.45N, 69.35W). This is 300 nautical miles east of Cape Hatteras, and 285 nautical miles northwest of Bermuda. Another position given for the ship was 35.36N, 69.35W – virtually on top of Schnee’s position.
Given the distances involved and the fact that both parties were navigating at night using only celestial navigation, the margin of error makes the difference negligible. In other words, the sub and ship were reported by their respective master/commander as being at virtually the same place and the same time. This is important since most sources in print and online credit (or discredit) Kapitänleutnant Hellmut Rathke with the failed attack on the Freden.
Rathke’s sub, U-352 was attacked and sunk five days later, on the 9th of May 1942, by the US Coast Guard Cutter Icarus off Cape Hatteras. Though 15 perished, 33 were rescued, including Rathke. What makes clarifying who attacked whom, it appears that Rathke admitted fruitlessly attacking a ship, and the attack was attributed to that on the Freden. However U-201/Schnee’s log book, or KTB, makes it emphatically clear that he in fact led the attack on Freden at the specific time in question and the specific location. 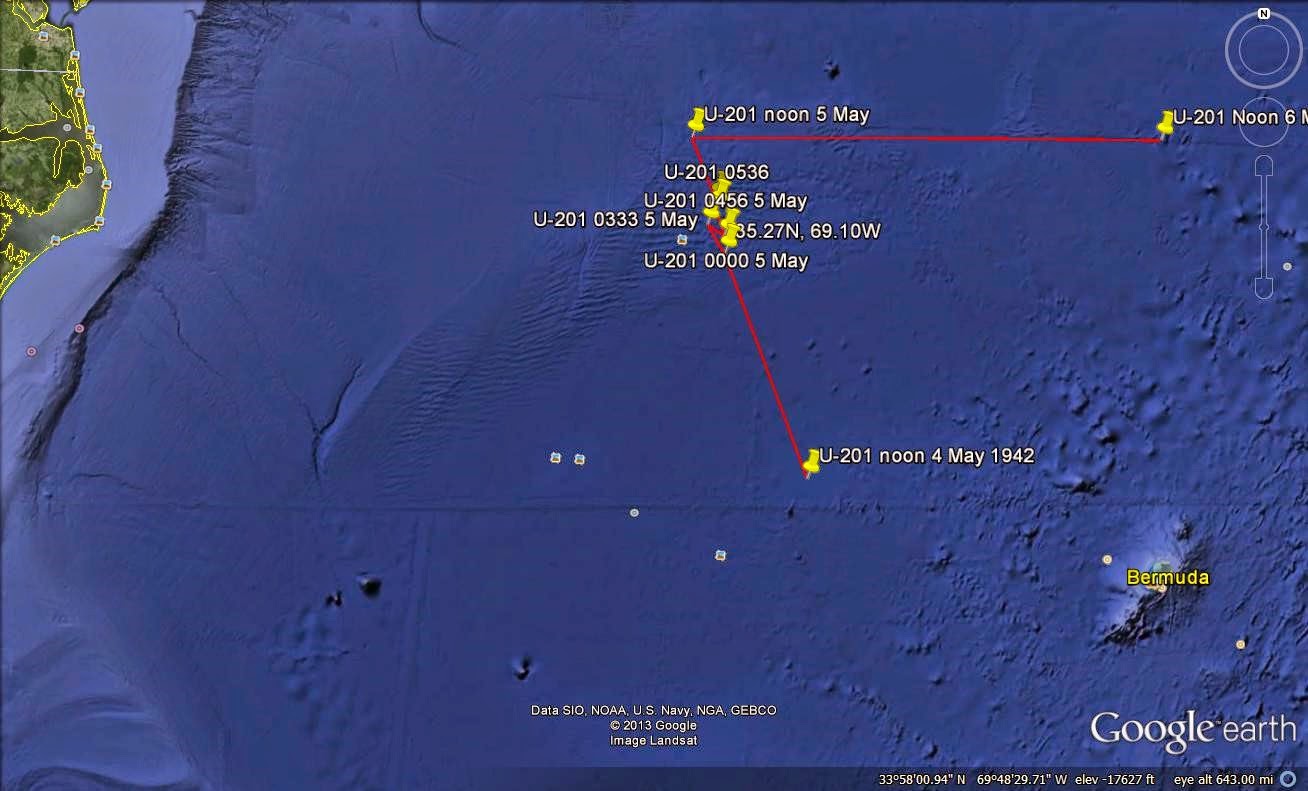 Chart showing movements of U-201/Schnee during before and after the attack on Freden.
Source: Google earth, author’s inputs based on Uboat.net and KTB data from uboatarchive.net
The second incident where the Freden was attacked but escaped has been verified as an attack by the German submarine U-98, under Korvettenkapitän Wilhelm Schulze on 19thMay, 1942. The war diary of U-98 under for the incident reads:
“At 1345 see “at least” three vessels. A US Coast Guard cruiser (Campbell class) [USS Heroic, AMc84] and two freighters [Swedish SS Freden and Anna], approx. 5000-6000 tons, doing approx. 11 knots. They are down to their last three bow torpedoes, so they plan to attack the cruiser first, then the two freighters.
At 1508, they try to fire the first torpedo, and have difficulty getting it out, but I don’t understand the details. It sounds like they fire the other two, before they discover a fourth vessel, a “U-boat hunter” [USS Owl] behind the second freighter (at 1519).
1535 – discover a fifth vessel, a converted fishing steamer (“guard vessel”), which turns and comes towards them, so they go down to 40m. [this is most likely the USS Heroic, an armed merchant cruiser – in reality there were only four vessels in the convoy total].
1555 two Wabo [water bomb or depth charges] damage the U-boat, which takes in some water, and becomes difficult to control. They manage to stabilize it at 85 meters [280 feet].
1618 two additional Wabo [depth charges] detonate at 45m, but aren’t as close as the previous ones.
1643 – can no longer hear enemy…..”
The Freden, Anna, and the entire convoy escaped since the submarine’s firing equipment was off calibration due to the depth charge attack/s. It was a close call by any standard and shots had indeed been fired, as the USS Owl personnel attested to having had a torpedo pass ahead of its bow. After this close call the Owl escorted the Anna and the Freden back from Bermuda to Norfolk, where they arrived in the Navy Yard on the 29thof May 1942.
Seemingly blessed, the Freden survived the war. A typical entry in various Allied war diaries is from the USS Reading (PF-66). It reads: “0600 – Ordered off station by C.T.G. 60.8 to intercept strange vessel identified as the Swedish freighter FREDEN.” This was dated 26 January 1945 as the USS Reading was escorting a convoy, towards the end of the war in the Atlantic. On 11 February 1944 the Freden was escorted from Argentia to St. John’s Newfoundland by two Canadian and one British warship (HMCS Goderich, HMCS Cailiff, and HMS Berkeley Castle) along with two other merchant ships.
In 1954 her new owners, Koehn & Bohlmann Reed. A.G. of Hamburg Germany renamed her the Ingeborg. The arrangement lasted for six years, until 1960, when Alnwich Harmstorf GmbH of Lubeck broke the little ship up. Freden arrived for its fate on the 8thof February, 1960.
Adalbert Schnee also survived the war after moving to shore and then back to U-boat command in 1945. After working as a commercial representative and heading up the leading German U-Boat crew association, he became the leader of a sail training school on the Mediterranean island of Elba. He lived until the age of 68, passing away in Hamburg in 1982.
SOURCES:
Busch, R. and Röll, H-J., German U-boat commanders of World War II, 1999
Fold3.com – for the war diaries and deck logs of USS Owl and convoy notes for SS Freden
Gannon, Michael, “Operation Drumbeat,” Naval Institute Press, Annapolis MD, 2009 – for a detailed description of the U-123/USS Atik battle – the best account this author has found (I spoke with Mr. Gannon and his advice to me was “tell both sides of the story.”