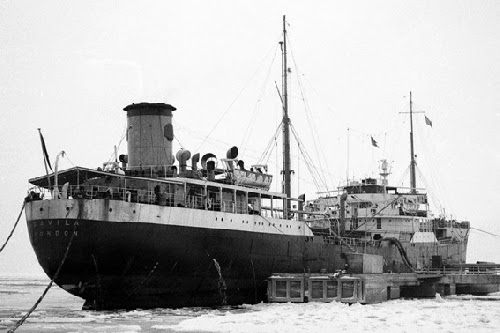 Photo of the Davila, built 1938, from the stern involved in a load or discharge operation.
Photo source: http://www.helderline.nl/tanker/185/davila/
The British tanker Davila was built by Lithgows Limited of Port Glasgow in 1938. The motor tanker was 8,053 gross registered tons, and could carry 12,150 tons of petroleum. Her dimensions were 483.4 feet long, 50.2 feet wide and 27.7 feet deep and she could achieve 12 knots speed. During World War II the Davila participated in an impressive 100 convoys.
In the winter of 1941/1942 Davila had split off from Convoy ON 42 from Liverpool to Halifax. They had sailed on the 1st of December and the Davila sailed for Curacao. After loading in Curacao the ship was heading back to Liverpool, where it joined Convoy ON 111 in July 1942.
During her voyage back across the Atlantic the Davila was unescorted and laden when she was discovered by the Italian submarine Enrico Tazzoli under the command of Carlo Fecia di Cossato. The Italians were coming off a stellar patrol during which they had attacked or sunk a ship every few days. However during their last attack, against the Athelqueen off Abaco, Bahamas, the submarine had collided with the ship and bent the bows, rendering the forward torpedo tube inoperable. So the large submarine was limited to attacking ships on its return to base in France either with its deck guns or stern torpedo tubes. It had as an advantage a surface speed as high as 48 knots – more than its smaller German counterparts.
At 4:13 pm submarine’s time the submarine sighted the Davila on course 340 degrees north-northwest from a distance of 3,500 meters. Commander di Cossato decided not to attack, but appears to have followed the ship just in case. And indeed the Italians were spotted by their British quarry, which counter-attacked. Noted expert on Italian submarine patrols Platon Alexiades from Montreal translated the Tazzoli log thus:

“He dived at 1621 because the firing from DAVILA was becoming too close for comfort. The word he used is “pericoloso” or dangerous. I do not know how many rounds of 100 mm he had left but he had already used nearly 200, so he may have been short of these too. He does state that he could not attack and had altered course to 130 degrees.”

The Tazzoli dove at 4:21 pm and followed from a submerged position. At 6:23 pm the Tazolli again surfaced and then followed its normal navigation back to Bordeaux and the headquarters of the Betason flotilla’s headquarters in France.
At 10:48 am local time the Eastern Sea Frontier’s Enemy Action Diary records an SSS message (for submarine sighted on the surface) from the Davila in position Latitude 37.03 north and Longitude 60.39 west. Since the Enrico Tazzoli recorded its encounter at 38.10 north and 60.30 west, the positions are not on top of each other but near enough in time and distance to be a match. The Italians also heard the British transmitting their SSS on the 600 meter bandwidth, which enabled them to identify the Davila on their original patrol log.
The War Diary of the US Naval Operating Base (NOB) in Bermda for March 20th 1942 also verifies that “The day brought in two SSS messages. One received at 11:00 [am] was from the H.M.S. DAVILA. A U.S. submarine, operating in the vicinity, was dispatched to the distress area.” (The other SSS was from the US steam ship Oakmar).
Amazingly the Tazzoli seems to have evaded detection not only by the US submarine sent to find it, but also three German submarines operating within 60 miles of the incident: U-123 under Reinhard Hardegen which was in position 37.57N, 57.42W, U-105 under Heinrich Schuch which was in position 37.03N, 60.06W, and U-160 under Georg Lassen, which was in position 39.45N, 56.30W. U-105’s log does not record making an attack on a ship on the 20th of March 1942, though it was the closest to the position, and U-160 was too far away to have made the attack that day.
Hardegen, in U-123, one of the Aces of Operation Drumbeat, records in his patrol diary at 12:00 on the 20th March that “Tanker DAVILA reports surfaced U-boat on the 600 meter frequency. Distance 60 miles. DAVILA reports that she is attacked by a U-boat. There are 2 to 3 emergency messages daily from tankers on the 600 meter frequency.” Later his men sight “to port the bridge of a sunken ship drifts past. Possibly from DAVILA?”
In conclusion, the wreckage of the Davila might well have littered the North Atlantic that day, had the Tazzoli not been in such damaged condition that it was essentially limping home. The combination of the attack machine which the Enrico Tazzoli had proved to be as well as the expert command of di Cossato made her a formidable enemy to the British tanker, which was surely very fortunate to have entered and then sailed out of the periscope sites of the sub. 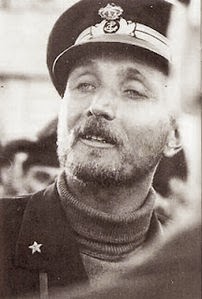 Italian submarine Enrico Tazzoli – note the large size relative to many German attack U-boats.
Photo source www.regiamarina.net and http://sixtant.net/2011/artigos.php?cat=italian-submarines-&sub=sommergibili-in-action&tag=9)enrico-tazzoli
Because the Tazzoli had its starboard torpedo tubes damaged in the attack on the Athelqueen,it was forced to break off the patrol and make back for Bordeaux. Its arrival and passage up the Gironde estuary, with crew lining the rails, its impressive girth on display, and the damage visible, are well documented in photographs from a biography of di Cossato. She arrived on the 31st of March, culminating one of the most successful single missions to the region and of the war as a whole, with a ship attacked on average every day of the week for a period.
Having survived the war and then some two decades following it, the Davila arrived in Bilboa Spain for scrapping on the 25th of January, 1964.
FURTHER READING:
On Fecia di Cossato: http://www.uboatsbahamas.blogspot.com/search?q=tazzoliand http://www.regiamarina.net/detail_text_with_list.asp?nid=153&lid=1&cid=3
On Enrico Tazzoli’s successful patrol: http://www.regiamarina.net/detail_text_with_list.asp?nid=84&lid=1&cid=42
SOURCES:
Alexiades, Platon, for the war diary of the Italian submarine Enrico Tazzoli
Convoyweb.co.uk – for Rapana convoys — http://www.convoyweb.org.uk/hague/index.html
Fold3.com – for the war diaries and deck logs
Helderline.nl site for images and history of the Davila, http://www.helderline.nl/tanker/185/davila/
Jordan, Roger, The World’s Merchants Fleets 1939, Naval Institute Press, Annapolis, MD, 1999
Mason, Jerry, www.uboatarchive.net, for the war diaries (KTBs) of U-123 and U-105
Mozolak, John, “New York Ships to Foreign Port, 1939 – 1945,” http://janda.org/ships/
Regiamarina.net, by Cristiano D’Adamo for an excellent detailed account of Italian submarine activity
Wrecksite.eu for specifications and history of Davila
Wynn, Kenneth, U-boat Operations of the Second World War, Volume 1 and Volume 2, 1997