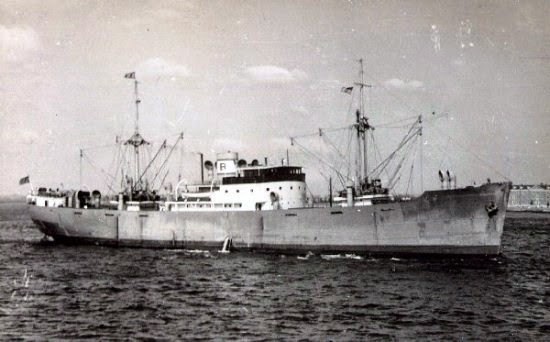 Motor ship Leif in her pre-war color scheme, before the 3-inch gun was mounted aft in February 1942.
Photo source: http://www.uboat.net/allies/merchants/ships/1387.html
The 1,582-ton motor ship Leif was built in 1937 as yard number 953 by A/B Lindholmens Varv Mek. in Verkstad, Göteborg, Sweden. Capable of carrying 2,900 tons of deadweight cargo the ship was 297 feet long, 42.1 feet wide and 19.3 feet deep. Her single Sulzer diesel engine generated 398 net horsepower and propelled the steel hull at 11.5 knots when built. Her owners were Gogstad & Company C T of Kongensgaten 6, Oslo, Norway. Her flag was Norwegian.
In the ship’s official papers during World War II was an unusual, prominently shared document. It read: “This is to certify officially that this ship, the M/S “LEIF”, Norwegian Port of Registry: Oslo, Norway, has been requisistioned by the Royal Norwegian Government and is held by the master on behalf of the Royal Norwegian Government. Dated at Ciudad [Sic] Trujillo, R.D. [present-day Santo Domingo, Dominican Republic], May 20, 1940. Signed: R. Martinez, Royal Norwegian Consul. (Bears the Consular Stamp of the Royal Norwegian Government.)”
The ship was no stranger to New York, as by all indications it was based from that port during World War II. According to John Mozolak’s analysis of vessel movements in and out of New York Harbor 1939-1945, Leif sailed to or from there seven times in 1939 from September to December alone and appears to have arrived 25 times, or every two weeks, during 1940. During that year, on the 10th of July, the men on the Leif rescued 25 men from the British steamer Davisian which had been attacked and sunk by the German raider Widder east of the Caribbean on the 10thof July 1940. In 1941 there were 18 arrivals and in 1942 two departures from there: on January 16th and February 25th.
The Master of the Leif was Captain Lars Christian Holm Brynildsen, a Norwegian. Beneath him were 24 officers and men. Though most of them were Norwegian, Mess Boys Arturo Duran, Luis Mueses, and Aurillo Lantigua were from the Dominican Republic, Able-Bodied Seaman Martin J. Stuart was from the US, AB Oscar Petterson and Cook Torsten Bechmann were Swedish, and Radio Operator Giles E. Bulger was Canadian. The ship was manned with a 3-inch US-made gun aft, which was equipped with 76 rounds, however the gun was new as of this particular voyage and there were no special gunners on board to man it.
Leif left New York Harbor on Thursday 26th of February 1942 and dropped the outward bound pilot at 3:30 pm. Her cargo was roughly 2,300 tons of general cargo, including cement in the numbers one and two holds forward, as well as food. The ship was bound for Cuidad Trujillo, Dominican Republic, in the Caribbean.
Captain Brynildsen was under strict instructions from the British Shipping Advisory as to how to proceed. He was to follow a course of 169 degrees true for 40.5 nautical miles, then 117 degrees true for 275 miles, then 185 degrees for another 40.5 nautical miles, and finally 117 degrees again for 275 miles and finally 185 degrees true for 400 miles. The weather was typical for off the northeast coast of the US in February: the seas were heavy from the northwest and visibility was poor.
Roughly 32 hours into the voyage, in the early morning of Saturday the 28th of February the ship and submarine were 220 nautical miles northwest of Bermuda and 300 nautical miles east-southeast from Cape Hatteras, North Carolina. Leif had gone 260 miles along the course of 185 degrees true, the final leg of its instructions.
At the time, the ship was only ten hours away from switching to receiving messages via radio from Bermuda rather than Ottawa Canada. The radio was sealed against accidental transmission, which would give the ship’s position away to submarines lurking nearby. One such submarine was the Type VIIC U-653 under Gerhard Feiler, and he had the Leif in its sites.
Kapitänleutnant Gerhard Feiler was 32 years of age at the time. Born in Breslau Germany he was a member of the Crew of 1933 at the Marine Academy and worked his way up the ranks between 1934 when he was Offiziersanwärter to Kapitänleutnant in 1940 and Korvettenkapitän in 1945. He was awarded the German Cross in Gold in 1944. Overall he sank three ships including the Leif, damaged a warship and another merchant ship. In the Bermuda area he also sank the Peisander and the American naval vessel USS Gannett.
U-653 was laid down in April 1940 and commissioned by Gerhard Feiler in May of 1941. Its only two commanders were Feiler and Hans-Albrecht Kandler. In less than two years four individuals were lost from the deck of the submarine – an unusually morbid statistic. These included Willi Pröhl on 18 August 1942, Heinz Wendler on the 22nd of December 1942, Werner Laudon less than three weeks later on 13 February 1943, and Walter Mayer three weeks after that, on 9 March 1943 (Uboat.net). If there was ever a submarine where the maxim “one hand for the ship, one hand for yourself” applied, this was it.

The emblem chosen by officers and crew of U-653: a depiction of a lobster pinching Sir Winston Churchill.
Image source: Georg Hogel, “U-Boat Emblems of World War II, 1939-1945,” Schiffer Military History, Atglen, PA, 1999, page 135
Back on board the Leif, Captain Brynildsen finally felt comfortable enough to leave the bridge and take a rest on his day-couch, fully clothed at 11:30 pm on Friday the 27th of February. He had only had an hour and half of repose when at roughly 2 am on the 28th he was thrown from the sofa by a violent explosion. Because Feiler’s torpedo or torpedoes had penetrated holds one and two where the cement was stored the men only heard a “muffled ‘bang,’” as the cargo absorbed much of the impact, however the blow was fatal and the ship had less than ten minutes afloat.
At the time there were five men on duty: two in the engine room and three on the bridge, including the officer of the watch. Radio Operator Giles Bulger, the Canadian, had no opportunity to transmit an SSS message for “submarine attacking,” as Leif’s foremast fell on top of the radio shack, rendering it both inoperable and inaccessible. Although all the 25 men rushed to the decks to man two lifeboats, one of them, Mechanic (Motorman) Erling Syversen appears to have dashed back below to retrieve personal belongings, and was never seen again.
The five men on watch at the time of the attack boarded one lifeboat and Captain Brynildsen boarded another. The Captain ensured that the several secret codes were sunk in a bag weighted with lead. Because he did not see Syversen going below, he assumed that all 25 men made it into the two boats.
Because of the rush of time most of the men boarded the boats not while alongside the ship and then by being lowered to the water as is customary, but by jumping into them once they were launched. Others including the skipper simply leapt into the water and were pulled into the lifeboats. Captain Brynildsen pointed out that the boats were “well provisioned and in accessible positions and that abandonment of the ship was performed without undue incident. He praised highly the behavior and general morale of the men.”
The Leif sank six minutes after the initial attack, at roughly 2:06 am on the Saturday 28th. At no time did the survivors in Captain Brynildsen’s lifeboat see or interact with Feiler and the men of U-653, but then it was both rough and dark at the time. It would appear that the two lifeboats were soon separated from each other.
Two days later, on Monday March 2nd 1942 at 6:00 am the Swedish motor tanker Sveadrott came across Captain Brynildsen’s boat with a total of ten men in it. At the time the survivors were about 185 nautical miles west of Bermuda. Captain Brynildsen estimates that the men managed to sail and drift roughly 90 miles south, though it may have been between 100 and 150 miles if they were rescued 185 miles due west of the island.
Sveadrott was built by Kockums AB of Malmo, Sweden in 1938 (launched 11 July and completed 29 September). Here overall length was 526.4 feet, beam was 63.4 feet, and depth was 28.7 feet. The ship’s tonnage was 10,019 gross registered tons, making it a large vessel for its time, capable of carrying 15,310 tons of cargo. Its Kockums main engine propelled the ship at an impressive 14.77 knots – over three knots faster than the Leif.
M/T Sveadrott of Sweden.
Photo source: http://commons.wikimedia.org/wiki/Category:Sveadrott_(ship,_1938)#mediaviewer/File:Sveadrott.jpeg
Sveadrott deposited the ten Leif survivors in Key West, Florida on Friday the 6th of March at 11:00 am. The survivors were then interviewed by US Navy intelligence officers first in Florida and then in New York. Their 14 companions known to have been in the other lifeboat were never found and, like Syversen the Mechanic who dashed below, are forever lost at sea.
U-653 accomplished nine patrols before being sunk on 15 March west of Ireland by HMS Vindex, HMS Starling, and HMS Wild Goose. All 51 hands went down with the submarine. Sent to shore duty after two years in command of U-653, Gerhard Feiler survived the war and was to live until 1990.
Sveadrott was sold to a Panamanian firm named Pacific SA SH and renamed Switzerland in 1962. In 1973 she was sold to a firm named Remasa in Bilboa Spain, where she was scrapped.
Recently relatives of Radio Operator Bulger, Captain Brynildsen, and First Engineer Kristensen have all reunited with each other online through the highly detailed and accurate site www.warsailors.com.
SOURCES:
Busch, R. and Röll, H-J. (1998). German U-boat commanders of World War II
Fold3.com – for the war diaries and deck logs
Holm Lawson, Sir, warsailors.com, for the most detailed analysis of Norwegian ships in WWII available.
Hogel, Georg, “U-Boat Emblems of World War II, 1939-1945,” Schiffer Military History, Atglen, PA, 1999, page 135 for the emblem of U-653
Jordan, Roger, The World’s Merchant Fleets 1939, Naval Institute Press, Annapolis, MD, 1999
Mason, Jerry, www.uboatarchive.net
Mozolak, John, “New York Ships to Foreign Port, 1939 – 1945,” http://janda.org/ships/
“Survivors Statements” including the Panama portion of Souza’s narrative, from NARA, in Washington DC, as found by Michael Constandy, www.westmorelandresearch.org. Formal citation: Survivor’s Statements (1941-1942) Series : Papers of Vice Admiral Homer N. Wallin, compiled 1941 – 1974.  Record Group 38: Records of the Office of the Chief of Naval Operations, 1875 – 2006  Entry P-13.  National Archives at College Park – Textual Reference (Military) 8601 Adelphi Road, College Park, MD 20740
Uboat.net for much of the information, including photos of U-boat Commander and its victims, http://www.uboat.net/men, and men lost overboard and boat history, http://www.uboat.net/boats/u653.htm
Wrecksite.eu for specifications and history of Sveadrott and Leif: http://www.wrecksite.eu
Wynn, Kenneth, U-boat Operations of the Second World War, Volume 1 and Volume 2, 1997