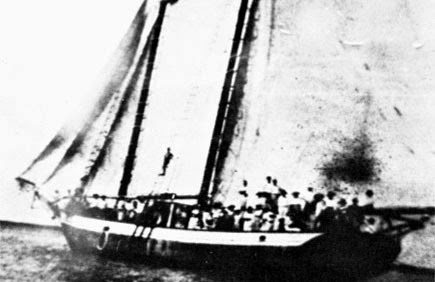 A rare and unique “moving” photo of the schooner mailboat S/V Albertine Adoue in the Bahamas c.1922 laden with passengers and cargo – note the person on the port ratlines (rigging) aloft, as well as the stains of the sails (lower right) probably from traffic over them whilst they lay on the boom over the cockpit.

CONSTRUCTION: wood salvaged from the schooner built in Bath Maine by Kelley & Spear – Built by , Bath, Maine, 1890. 716 gross tons; 171 (bp) feet long; 36 feet wide.  engine,
YEAR BUILT: 1890 originally and then re-built from timbers in 1894 in Green Turtle Cay Abaco.
BUILDER: originally Kelley & Spear of Bath Maine then by owner Capt. William Augustus Roberts who had the new vessel salvaged off Spanish Cay and built at Black Sound, Green Turtle Cay, Abaco
EARLY CAREER: built 1890 in Maine, flagged to Galveston Texas. Wrecked in
BAHAMAS CAREER: served Abaco from c.1894 to 1923, replaced by the M/V Priscilla in 1923, nearly lost in a hurricane Long Island Bahamas, 1926, whilst serving Inagua and other islands, wrecked off Oak Island North Carolina 1930
CAPTAINS: Before the Bahamas Captain Nathan K. (or R.) Rich (wife Nellie), and Capt. Hubbard. In Bahamas Captain Hartley Roberts, Captain Osbourne Roberts, Captain Roland Roberts, sons of William Augustus Roberts, who may have owned her before or after Mr. R. J. Anderson Farrington.
OWNER/S: in the US Mr. Jacques Adoue (possibly), and Captain Nathan K. Rich, and in the Bahamas Mr. R. J. Anderson Farrington (in 1926) and Mr. William Augustus Roberts.
FATE: on Christmas Day 1930 (Dec. 25 or 26) went aground w/ a cargo of liquor off North Carolina
NOTES: Mrs. Joy Lowe Jossi, Evan Lowe and Dave Gale and Peter Roberts all deserve great credit for finding, preserving and writing about the history of the Albertine Adoue. Sources: Mr. Peter Roberts for the photograph, Mr. Evan Lowe for the text, and Mr. Dave Gale from his book “Ready About.” Mr. Lowe’s blog is www.outislandboy.wordpress.com and I am indebted to him.

History: Galveston in Texas is where Albertine Adoue was home ported or most of its career as a large US-flagged ship, between 1890 and 1894. In May 2014 the grandson of Albertine Adoue wrote to this blogger with the following:

“Lucie Adoue was my grandmother and never lived in Galveston.  Her father, Jacques Adoue lived and died in East Texas.  The yacht was probably owned by his brother Bertrand Adoue and his wife Albertine.”﻿

“Bertrand Adoue and Jean Jacques Mistrot financed and managed blockade running  during the Civil War. It is said they lost at least three large sailing vessels. ….Mrs. Albertine Adoue, one of Galveston’s most prominent women, died at her home on January 13, 1918. Bertrand Adoue is buried in the Cahill Cemetery in Galveston.”

In 1871 Mr. Adoue was married in New Orleans to Miss Albertine Schneider

The firm of Adoue & Lobit, grocers, started business in Bryan in 1867. Later on a branch in Calvert was established and the business grew rapidly. After the Central road was extended from Bryan to Calvert in 1869 Mr. Lobit remained at the head of the grocery business in Bryan, while Mr. Adoue moved to Calvert, establishing a bank there under the name of Adoue & Lobit. As had been the case in the grocery business, the banking venture succeeded phenomenally, and with an enlarged capital broader fields were sought. About 1872 the grocery business in Bryan was wound up, while Mr. Lobit, as representative member of the firm, came to Galveston and established a cotton commission and banking house at the Oleander City. In a period uncommonly short the banking connections of the new firm embraced all the great capitals of Europe and their banking operations in Texas included every section of the state.

Albertine Adoue, for whom the vessel was likely named (per grand-nephew Tom Parker), is described as “one of Galveston’s most prominent women” (see citation at bottom).
Source: http://trees.ancestry.com/tree/9104966/person/-851600023/photox/d46095b7-31ed-4fd4-9a90-4fd7e7169168?src=search and http://standrewsbcs.org/wp-content/uploads/Our-Founders-Article-10-4-12.pdf
﻿The schooner must have been quite impressive because marine artist William Pierce Stubbs painted her in full regalia, with a pennant reading her name on the aft-most mast and a Sunday pennant on the fore-most.
Source copyright  William Pierce Stubbs, 1842 – 1909, http://www.artnet.com/artists/william-pierce-stubbs/the-albertine-adoue-VQJIbyhb6D2V3XW2WDnL7g2
In 1894 the three-masted schooner, US-flag to Galveston Texas, wrecked off Abaco on the “Hoys Cay”. The Lewiston (Maine) “Evening Journal” of Thursday 12 April 1894 reports:

“The three-masted schooner Albertine Adoue, Captain Hubbard, built in Bath by Kelley & Spear, in 1890 foundered off Hoys Cays, Bahamas on March 29th. She was bound from Philadelphia to Galveston with coal. About a fourth of the vessel was owned in Bath. She was valued at $48,000”.

NOTE: This author cannot find any “Hoys Cays” in the Bahamas – if any reader can, pray tell. Other accounts have the wreck taking place near Spanish Cay, of the northeast coast of Little Abaco.

This scene depicts the Abaco mail schooner the Albertine Adoue docked in Hopetown around 1920.
The caption reads “The Albertine Adoue, the last sailing vessel to serve as Abaco’s mailboat, was replaced by the Priscilla, a diesel-powered converted sailboat, in 1923. The cover drawing depicts the Albertine Adoue shorty after arrival at Hope Town in c. 1920.” A later version of the same book features a color painting of the same scene with some amendments.
Evan Lowe writes: “This image was used as the cover illustration for “Abaco, The History of an Out Island and its Cays” written by Steve Dodge and is available from White Sound Press.  Steve…resides part time in Hopetown.”
Dodge further writes, on page 87, the following: “The isolation of Abaco [to 1920] was still extreme. There was virtually no direct contact with any place outside of Abaco except for Nassau, Jacksonville (Florida) and a couple of ports in Cuba. All of these shipping routes were serviced by sailing vessels. The mail boat, which was the principal contact with Nassau was the Albertine Adoue, a sixty-foot schooner. In 1922 the Hope Town Commissioner complained about the service:
‘It is impossible in these progressive days to expect a mail service to be satisfactorily performed by a sailing vessel. Apart from speed, there is no comfort nor privacy to be obtained for passengers, and it is to be hoped I the near future that something more modern and serviceable will take the place of this wind jammer.'” From the 1922 report of the Hope Town Commissioner.
There is a fascinating and highly informative page, by Joy Lowe Jossi and her cousin Evan Lowe, at http://www.wikitree.com/wiki/Space:Mailboat_Albertine_Adoue. It reads:
“A two masted 60 foot schooner which sailed between Nassau and Abaco in the early 1900’s. It provided passengers no comfort or privacy. It was the last sailing vessel to serve as Abaco’s mailboat when in 1923 the Priscilla was placed on the Abaco route.[1] The Albertine Adoue was disposed of after 1928.
The Albertine Adoue may have been owned by Captain William Augustus Roberts of Green Turtle Cay, Abaco[2] or by R.W. Sawyer and R. Farrington.[3] The Albertine Adoue was captained by William Augustus Roberts’ sons (Hartley, Osbourne, and Rolland).“
We know from other sources that however “disposed of” in 1928, the ship wrecked in 1930 (below).

The following is a direct quote from Mr. Evan Lowe’s fascinating blog

“www.OutIslandBoy.wordpress.com”
“According to David Gale in his book titled Ready About…
Before diesels, mailboats throughout the Bahamas were powered by wind, although Abaco’s only sailing mail was Albertine Adoue.  Her history is a strange mix of success and misfortune.  The 60 foot schooner, built in Green Turtle Cay in 1898, was actually built from salvaged materials from a three-masted vessel of the same name that wrecked on the reef behind Spanish Cay.
Cousin Joy Lowe Jossi, recalls the words from her father, Mr. Cleri Lowe…

The Albertine Adoue was the first mailboat that served Abaco that I can remember. She was in service before 1923. The Albertine Adoue, a sailing vessel, a 60′ schooner, was owned by Capt Wm Augustus Roberts of Green Turtle Cay, Abaco. His three sons served as captain:  Hartley, Osbourne and Rolland. In 1923 it was replaced and upgraded by the Priscilla.”

On November 4, 1916 the Nassau Tribune advertised mail-carrying services by the Albertine Adoue in its pages, per the University of Florida Digital Collections,
http://ufdc.ufl.edu/l/results/?text=”albertine adoue”

According to the Kingston Jamaica “Gleaner” of August 6, 1926, after a viscous hurricane hit the Bahamas “it was reported on Sunday that the Albertine Adoue the windward mail [boat] owned by Mr. R. J. Anderson Farrington was ashore at Long Island in danger. Further news cannot be obtained until communication is re-established.”

Other ships written about in the same storm are

Source: The “Daily Mail,” London, UK, July 30, 1926, http://www.newspapers.com/newspage/21442069/
The same article cites Albertine Adoue: “with 40 persons aboard, sailed for the island of Inagua, a few hours before the hurricane struck. It was also classed among the missing craft. The mail boat carried 20 persons.”
Final fate: The Albertine Adoue was after 1923 or 1928 converted to a rum-runner to run the federal blockade of the US during Prohibition. It met its fate on the fog-bound coast of Oak Island, North Carolina on or immediately after Christmas Day 1930 per the following article and several others like it.
“Norfolk, Virginia, Dec. 26 [1930] A cargo of 1,600 cases of intoxicants was found on the British schooner Albertine Adoue, which went ashore off Oak Island, North Carolina, the Coast Guard reported tonight. The guardsmen valued the cargo at $80,000. None of the crew was aboard when the vessel was found. She was towed to Wilmington, N.C., where here cargo will be taken in charge by federal officers. The ship went ashore in the fog which has held the Virginia and Carolina coast in its grip for two days.”
Source: from www.newspaperarchive.com from the Reno, Nevada “State Journal,” Dec. 27 1930
In June 1893, before the Albertine Adoue was wrecked in the Bahamas presumably, her Master, Captain N. R. Rich, died from yellow fever in Cuba, per the following article entitled “Yellow Fever, N.R. Rich, master of a schooner dies from it”:
“Galveston, Texas, June 21 – Advices have been received from Cienfuegos, Cuba that N. R. Rich, master of the schooner Albertine Adoue, of this port, had died at that place of yellow fever. No other cases of the sickness were reported on board the vessel, and she had proceeded to the Delaware breakwater.” Note – other news articles of the time show the ship was strictly quarantined in Cuba before she was allowed to sail for the US – Yellow Fever was taken very seriously in all ports, and off Nassau ships were detained for weeks at the quarantine station off Atoll Cay, east of Paradise Island.
Source: Fort Wayne, Indiana “Weekly Sentinel,” June 28, 1893, from www.newspaperarchive.com.
Captain Rich was master for at least three years, since in 1890 the Galveston Daily News of March 14, 1890 shows the Albertine Adoue arriving in Galveston from Philadelphia with coal under his command. On June 27 1890 the same Captain Rich and his fellow officers provided a tour of the schooner for a dozen or so local teachers, and flew all the ship’s signal flags in the rigging as a courtesy. According to the Galveston, Texas, “Daily News” of March 14 1890 and June 27 1890.
Source: www.newspaperarchive.com.

There is a list of passengers including Capt. Rich’s family – possibly as they returned to the US without him after his unfortunate death, on the Ellis Island (New York) website – his widow was 27 years of age. : https://www.ellisisland.org/search/ship_passengers.asp?letter=a&half=1&sname=Albertine*Adoue&year=1893&sdate=07/06/1893&port=
Philadelphia,*Pennsylvania&page=1