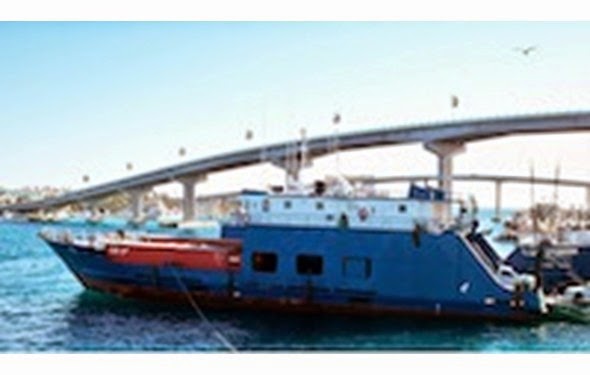 An image from an article about Laborde re-powering the KTC in “Workboat” magazine, 2013.
Source: https://www.workboat.com/imagedetail.aspx?id=20020

EARLY CAREER: so far as is known she has been serving the Bahamas her entire career
BAHAMAS CAREER: Nassau to North & South Cat Island, about 24 hours/$60 each way.
CAPTAINS: Capt. Tom Hanna
FATE: still operating
OWNERS: Ro-Ro Company, Thomas Hanna, appears it is operated by the Hanna family as Mrs. Hanna can be reached for scheduling at 242 341 3468 per below.
NOTES: According to http://www.acklins.com/Getting_to_Acklins.html, For those with plenty of time and a good book there is also the Mail-boat option with Cost: $90 one way. The Mail-boat’s name is KCT; duration is 26 hours one way.  Call Mrs Hanna, Tel (242) 341-3468 for departure dates since the boat leaves Nassau every 10 days.
From another source/trade publication: “The on-time delivery of freight is something businesses depend on to be successful.  That’s why Laborde Products  recently put a second pair of Mitsubishi engines in service in Nassau, Bahamas for the Ro Ro Co., which carries cargo throughout the Bahamas and Caribbean.

Ro Ro Co. owner Tom Hanna chose these engines to repower his cargo carriers because Mitsubishi engines are simple, reliable and mechanical, Laborde says. The Mitsubishis also provide him with much better fuel consumption than the older engines that he had been operating, the North American Mitsubishi distributor says, and Mitsubishi offers an assortment of horsepower ranges in a 6-cylinder engine.

Mitsubishi’s heavy-duty marine propulsion engines are fully mechanical and EPA Tier 3 compliant without the use of complex electronics or any after-treatment, and typically offer larger displacement and more mass than other engines, says Covington, La.-based Laborde, which services a far-reaching territory from Texas to Florida and New Orleans to Minneapolis.”

Here is an article about hurricane relief supplies arriving on the KCT:
“

October 05, 2011
A little more than a month after Hurricane Irene slammed into Cat Island in the central Bahamas, tearing off roofs and tearing apart lives, the mailboat M/V KCT arrived late last week with a container packed with love and crammed with proof that people cared. It bore furniture, paper goods, cleaning supplies, food, toiletries, clothing and more.

The owners of the M/V KCT, refusing to accept pay for shipping relief supplies, were among the unsung heroes who partnered in a drive started by Bank of The Bahamas to assist the hurricane-ravaged island.

“We’ve been told that Cat Island is not officially a disaster area, but tell that to the people who still have tarpaulins instead of roofs, families and elderly people whose furniture and personal belongings were destroyed by constant rains after the floods and wind of Irene,” said a resident. “We need help and we appreciate help.”

Help came in the form of newfound friends pulling together. “Bank of The Bahamas is the only full-service bank in Cat Island and we feel very much a part of the community,” said Michael Basden, BOB Marketing Manager. “When Hurricane Irene hit, we wanted to reach out with assistance immediately.” For the first few days, the head office in Nassau was unable to reach Cat Island except by cell phone to the branch manager, Letitia Brown. “Once we learned that everyone was safe, we gave thanks, asked what was most needed and got down to work.”

The bank’s active sponsorship committee launched Cat Island Code R.E.D. (Relief Effort Drive), placing donations boxes in all four New Providence branches, at Phil’s Food Services on Gladstone Road and setting up an account for cash donations. Internal memos circulated. Donations came in. So did friends. Andrew Stanford, a 30-year banking veteran who now owns and operates a trucking company, donated all services, working on and off for three days to collect donated furniture from Lyford Cay to Eastern Road in one of his two trucks — Dirty Paws Hauling and Stanford Moving. He and his team assisted loading cartons of paper goods, cleaning supplies and food purchased at Phil’s from donated funds and other monies allotted by the bank. Phil’s partnered from start to finish. In addition to making the drive part of their weekly promotional campaigns, the food giant provided goods at a substantial discount.

When the boat arrived, bank staff were overwhelmed. There were so many supplies they were able to create 75 care packages and with the help of the Anglican Dioceses deliver them in person from one end of the island to the other on Saturday. Four families got furniture.

“I’m very blessed,” said Marie Wilson, a grandmother from Stevenson who had lost everything and did not even have a bed to sleep in after the storm. “I appreciate what Bank of The Bahamas did. I cannot believe how blessed I am.” NEMA helped repair her roof. Now, furniture that the week before filled an expensive residence in Lyford Cay has a new home in Cat Island.

“It’s amazing how these things snowball,” said Basden. “One day we are trying to figure out how to help and the next week we are wondering how we are going to distribute everything collected. People do have a heart and when disaster strikes in The Bahamas, that heart is very big.””