Skip to content
SS RAMAPO, Attack Narrative
by Eric T. Wiberg, www.uboatsbermuda.com, March, 2014
The steamship Ramapo of 2,968 tons was built in 1924 by the firm of Dunlop, Bremner and Company in Port Glasgow, Scotland. Her original name was steam ship or SS Baron Wemyss and she was owned by the Kelvin Shipping Company Limited (H. Hogarth & Sons) of Ardorssan, Scotland, on the River Clyde near Glasgow. There had been an earlier Baron Wemyss, built by the same yard in 1912, and also a steamship, however she was torpedoed and sunk in the First World War.
Baron Wester Wemyss, in his Admiralty uniform in a portrait by Sir William Orpen.
Source:http://www.dreadnoughtproject.org/tfs/index.php/Rosslyn_Erskine_Wemyss,_First_Baron_Wester_Wemyss
Baron Wemyss was born Rosslyn Wemyss to an aristocratic Scottish family with a hereditary castle. At age 13 he joined the Royal Navy, signing aboard HMS Britannia as a cadet in 1877. He rose progressively through the ranks and during WWI was known as Sir Rosslyn Wemyss. He oversaw the successful evacuation of Allied troops (Anzac and British) from Gallipoli, Suvla Bay and Ari Burnu Turkey in December, 1915. He replaced Admiral Sir John Jellicoe as the First Sea Lord in December 1917 – the highest rank for a naval officer in Great Britain. After the war was made Admiral of the Fleet and joined the House of Lords as Baron Wester Wemyss of Wemyss in the County of Fife, Scotland, in November 1919. He died in the South of France in 1933.
The Baron Wemyss was a general cargo ship with a single propeller. She was 2996 gross registered tons, 332.2 feet long, 48.1 feet wide and 21.9 feet deep. Here single engine was build by David Rowan & Company and developed 225 net horsepower. She traded under the Baron Wemyss name for H. Hogarth & Sons Ltd. for 13 years, until 1937. Then it was sold to a firm in Genoa Italy named Alberto Tomaso Rosasco and renamed the SS Santarosa (possibly Santa Rosa). There were three other ships in the Rosasco fleet in 1939: the Escambia, Etiopia and Florida II.  Under the Santa Rosa name she traded between Europe and the United States. 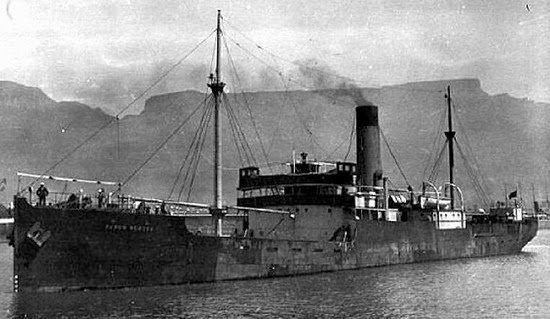