Following a request from my children, if I could do a recap of the events of the Second World War, when I was on board the m/s Peiping, torpedoed by a German submarine in the Sargasso Sea east of the Bahamas Islands and the events thereafter , as far as I can remember 71 years back in time. But I will make an effort! 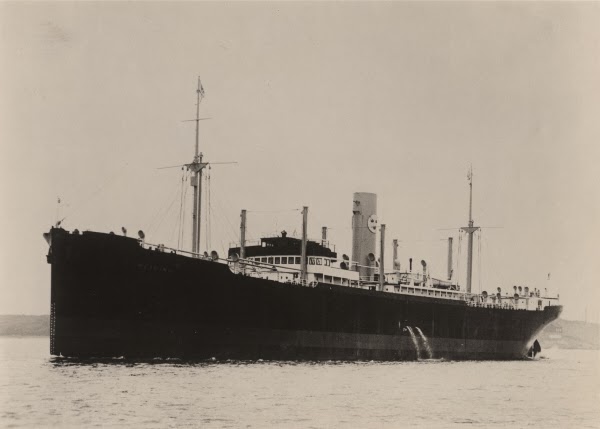 We left Buenos Aires, Argentina, August 22, 1942 with a cargo of most raw ox hide, and wool and tallow for New York. Everything looked good, glorious weather we pass the equator Sept. 2 at longitude 23 ° west, according to estimates. But on September 9, we were at latitude. 23 ° 50 ‘ longitude. w 50 ° 10 ‘. As was usual at sea , we drank coffee at 10 o’clock. Well we had been sitting in the mess hall (dining room) for 10 minutes, when the ship was shaken by a terrible explosion that threw water masses over the ship.

We rushed amidships to the lifeboats and then saw that the starboard both lifeboats was blown off, so we had to man the port two lifeboats, one larger and one smaller, we had problems with the launch, the ship was moving forward so the lifeboat was about to capsize then we could not loosen the pulleys,  but he who sat in the bow took the ax and cut the lifeline that was trapped in the ship, the lifeboat straightened up and pulleys released and we could row away from Peiping still floated.

When we come together with the smaller lifeboat, which had the severely injured motorman Augustsson on board , the engineer Liljeqvist saved his life when he rushed down into the water-filled engine room, where Augustsson was floating, carried him up to the lifeboat, notice that Augustsson was a big and hefty man, it was an achievement of class. We had a consultation in both lifeboats if we could row back, because Peiping floated still and three of our comrades were missing, and possibly rations and cigarettes , at sea all smoked, so without smoking (it) would become difficult.

Because we needed the smaller boat for this, we must move the seriously injured Augustsson to the larger lifeboat , which was not easy in the swell, but as a result of this harsh treatment, we pulled one of his knees, that had been dislocated, right. We were six men who rowed back to the ship in the smaller lifeboat. My old shipmate Anderberg stayed in the lifeboat and held it to the side of the ship, while the rest of us climbed aboard. First I ran to my cabin, where I waded in meters of water, everything was floating around, bags, duffel bags (and) bedding alternately, I got hold on for me important goods, things that I stitched into the canvas and a few cartons of cigarettes and then I went to the bow. I saw the machinist dislodge the link that our ape “Jocke”[1]was attached to.
When I arrived amidships, I looked into the machine, there was an uncomfortable silence, the water gurgled over the machine top, and (to) know that three of our comrades were still down there. I hurried on, and tossed the cigarettes to Anderberg in the lifeboat and then I proceeded to the provisioning repository, where I and a friend got hold of a box of condensed milk, which I put on the 3rd hatch. When I turned around to receive a box of dried fruit; then bang again, it was the second torpedo that hit between the fourth and fifth cargo hold.
Now everything went fast when I jumped overboard half the ship was below the water and when we swam forward to the lifeboat, which Anderberg bumped from the ship because he was afraid to get in the slipstream when Peiping disappeared into the depths with a terrible crash , and her engine men Gustav Engström, ST (?) Allan Dahlgren and Nils Wigsten. When Peiping had sunk, we saw among the debris that floated up, our monkey “Jocke” sitting on an empty drum balancing on the waves. At the same time came the U-boat surfaced and headed to the monkey and with a boat hook tried to save it, but the barrel went round and our dear “Jocke” disappeared into the depths.

Now , we set course for the shore , but it went slow , we had no favorable wind, we tried to row but was too weak to handle the oars . Then we saw a fishing boat and we waved and shouted , but they seemed a little suspicious and it was no wonder since we must have looked hideous , but in the end they took courage and came up alongside , and they gave us water and they took over the oars and these athletic build creoles and of them we were told that it was we had the islandGuadeloupe for about us.
Despite this good help, we did not land on the island until15.00 on 24 Sept. 1942 after having spent 16 days in the lifeboat, it was wonderful to put your feet in the soft sand on this palm-lined cove called “le Grande Anse ” (the Big Bay ) and I especially remember the sharp black guy, how he took the wounded Augustsson in his arms and carried him like a child and laid him in the shade of a palm tree. It ran a little water from a swamp and we hurried there to drink , the captain shouted ” do not drink it can be toxic ” but there was no one who took notice of this, we just drank . The fish had a jar with raw Rhum , which they gave us afterwards , that was not what empty stomachs needed, but maybe good to disinfect stomachs with.
Suddenly there appeared a jeep with two French officials who spoke to the fishermen and we once again got into the boats and the fishermen rowed us around a headland into a small town named Deshaies. It had grown dark when we arrived and we were very tired but happy, we were billeted in a school at the beach, quite simple, stood on poles, with a roof composed of reeds . The people were very kind and helpful, they gave us fried chicken and fruit and then we had to lie on the floor in the classroom and I will never forget when the young French teacher went around and bathed our faces with perfume against mosquitos, it was angelic . Then I fell asleep to the sound of waves on the beach. in the morning we were pretty alert after a good night’s sleep, which we had not done for 15 nights .

We went out to the creek that ran next door and joked with the black gals who washed clothes in the rippling brook. This Day on Sept 25. 1942, 13.00, we got, for the last time, embark our lifeboats, when a motor yacht took us in tow to the largest city on the island of Basse Terre, where we arrived at 16:30 the same day. There, we were taken into the monastery hospital at Pigal Saint Hyacente  What I particularly remember from it was that we got a laxative called English salt, to put the seam on our shriveled stomachs, but the catch was that there was only one toilet the one that found there first he stayed and the other had only monastery garden to take refuge and it can each understand, this fragrant environment snapped turned into a stinking inferno. After staying at the monastery hospital for 5 days, we were moved on 29 Sept. to a hotel up in the mountains in a village called Dolé, it was very beautiful on the volcano slope, there was a swimming pool in the park and the water came from the mountains and was over +30°C degrees.
The food consisted mostly of fish and bananas fried, boiled, I did not know you could do so much of bananas, but it wasgourmet foods after being 16 days in a lifeboat, but after 5 days in luxury, we were brought down to the quay in Basse Terre there were nuns from hospital to say goodbye and they took care of our ship dog “Don”, who shared our hardships during the lifeboat voyage. We left the island of Guadeloupe on October 3 in the evening with the French ship M / S Guadeloupe from Nantes in France and arrived in the town of Fort au France on Martinique October 4 at 7.30 in the morning, we were running a few hours by bus to an old fortress in the mountains. The garrison consisted of French Foreign Legionnaires. There were other ships, crews, including an Englishcrew who had been torpedoed like us. It was not a hospitable place, and we were delighted when wewere picked up in the morning and carried down to the harbor in Fort au France where the ship m / s Guadeloupe was anchored.
The ship stowed bananas for New Orleans in the United States and we would follow as passenger, except our four Chinese who have to undergo a special examination of the U.S. emigration authorities. This was not a passenger ship so there was not much space, together with three companions, I got to share asingle cabin, and others in temporary spaces. Sometimes I wondered if there were lifeboats for all, if something were to happen, but everything went well and we arrived in New Orleans in the U.S. on October 11, 4pm. Our 13 days in New Orleans were was agreeable.
We lived hotels in French Quarter and ate at a restaurant on the other side of Canal Street. It was just to order what you wanted and then sign the bill. Adjacent to the restaurant was the bar ” Dirty Marshal ” (“Den smutsige Sheriffen”) who became our regular locus. I bought khaki pants + shirt, instead of the tropic clothes I got in Guadeloupe. We were interrogated several times by FBI agents and questioned what we were doing in the United States, anyone that stood out was assumed to be spies. After two weeks, October 24, 1942 2pm, we left New Orleans by train to New York. We went in a so-called Pullman coach, the seats were transformed into beds at night.
It took two days by train to New York, where we arrived October 26 on my 23 birthday, we left New York with m / s Brageland as passengers to Buenos Aires in Argentina, served by Swedish vessels authorized by the warring countries of safe passage to Sweden. After bringing cargo to Rio and Santos in Brazil, we came to Buenos Aires on December 3 1942, where we stayed at Hotel America to December 21 then we – Anderberg and I  – went on board the m / s Nagara as passengers to Sweden. We came to Bahia, Brazil, on January 10 1943 but we were not allowed to proceed until 23 March. Then we departed to Horta in the Azores, where we arrived on 6 April and lay there to 11 May, when we got permission to go to Gothenburg via the Faroe Islands. We arrived in Gothenburg May 25, 1943 at, 10 am I think I was home in Strömmared on 26 May to a waiting delighted Mother.
Written downby Artur Larsson BrattorpIstorp 3 September 2013
[1] ”Jocke” is the nickname for ”Joakim”.
[2] It ishard to see what he has written, it canbe 794 nautical miles.
[3] He was there as a sailor on board a ship. Liverpool misspelled Liverpol.
[4] He writes “limejuicearna” and mixes English and Swedish.
[5] Yes, he said it in English.
[6] ”The Fox”.
[7] ”The Old Fox”.