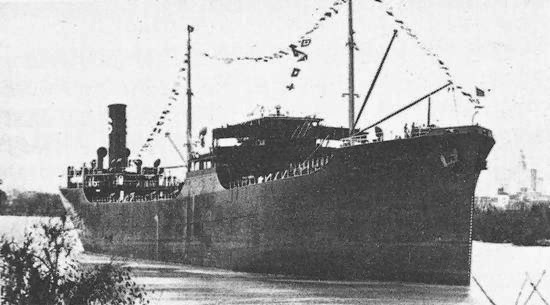 The Mobiloil (spent Mobile Oil in the original, contemporaneous survivor reports on file at the National Archives in Washington) was completed in January of 1937 by Sun Shipbuilding and Dry Dock Company of Chester, Pennsylvania. Her owners were the Socony-Vacuum Oil Company Incorporated of New York, to which port she was also flagged. Mobiloil was a steam tanker of 9,925 tons. She was proceeding in ballast from New York, which she left on 16th April 1942, to Caripito, Venezuela, via Norfolk Virginia, and maintaining a speed of 14 knots. Her crew consisted of eight officers, 33 crew, two workaways (who worked for room and board for the passage), and nine armed guards.

As evidenced by their aggressive resistance, Captain Farrow and his crew had not been idle on board. They managed to send an initial distress signal on the first attack, which was acknowledged. The confidential codes were then thrown overboard. A second SOS or SSS for submarine sighted was sent at 0445 local time. The master noted that his SSS “was acknowledged by shore station and several ships” (Survivor Reports, NARA2). Indeed the station at Amagansett New York acknowledged. The transcript of one message optimistically reads “Torpedo detectors indicate torpedo has been fired at ship – prompt manoevering saved ship”, received at Washington and relayed to New York (Id.).

The captain counted six torpedoes fired at his ship. When the demise of the tanker was apparent, the remaining lifeboats were ready and launched. At 11:00 ship’s time, with the ship stopped, all fifty-two crew boarded them, and while the submarine stayed off about two and a half miles, they set course for Cape Haitian, the northwest point of Hispaniola, to the southwest.  Mobiloil was finally abandoned at 26.10N and 66.15W, in the shape of a “V”, with both extremities pointing skyward. Captain Farrow recorded that she sank at 11:05, or eight hours and thirty-seven minutes after the attack began.

Perhaps anticipating a brouhaha, Captain Farrow went on record to John A. Young, USNR Ensign, stating that “he had been furnished routing instructions by the Naval Authorities at New York and that upon reaching Norfolk he had been given additional routing instructions which were contradictory to those given him at Ne York and that he did not have enough fuel to follow the Norfolk routing instructions. He was on the New York routing when he was sunk.” Furthermore the Captain of the Armed Guard, F. T. Sims, observed wryly that the ships needed more star shells, since “once a submarine has a ship located, keeping the area dark is advantageous only to the submarine.”
Despite his valiant resistance and successfully saving all of his crew, Captain Farrow “was later convicted of violating convoy routing orders, because he had been ordered to await a convoy off Norfolk, but the vessels did not arrive at the appointed hour, so he proceeded alone” (Uboat.net) showing that even in the height of war time administrative bureaucracies were hard at work and effective in their punishment.

The question “any personnel fault” at the bottom of the US Coast Guard questionnaire is normally reserved for Captains to vent their issues with undisciplined crew or passengers, and is rarely used. If anything is written, it normally reads “no – crew behaved in an exemplary or orderly fashion.” In this space in the Mobiloil report written on 25 November, 1944 the following words are hand written: “Yes; Master was convicted of violating convoy routing orders.” (“Report on U.S. Merchant Tanker War Action Casualty,” US Coast Guard, NARA1).