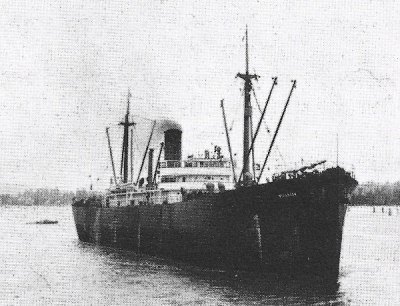 The Ohioan was an American-built and flagged steam freighter of 6,078 who also met her end at the tip of a torpedo from Teddy Suhren in U-564 off the coast of Florida. The story of the rescue of part of her crew after a sinking which lasted less than two minutes is compelling. Ohioan was completed in 1920 by the G. M. Standifer Construction Corporation of Vancouver, Washington (opposite the river from Portland, and not to be confused with Vancouver, BC Canada). Her first name was Pawlet under the US Shipping Board. In 1928 she was renamed Golden Wall for Oceanic & Oriental Navigation of San Franciso, and in 1934 named again the Willsol for Williams Steamship Corporation of New York. She obtained her final name in 1937. (Uboat.net). Her owners were the American-Hawaiian Steam Ship Company of New York, whose registry the ship shared.

A crew of 37 was led by Captain Frank H. Roberts, who only survived the casualty due to the selflessness of his crew and the attentiveness of an alert first mate. The ship was on its way all the way from Bombay, India, via Port Elizabeth, South Africa, San Juan (where it was routed by Naval orders) to Baltimore, Maryland via Cape Henry for orders. Obeying Naval instructions Captain Roberts had entered the Caribbean via the Mona Passage, and steamed close to the coast of Cuba through the Yucatan Channel and all the way up the Straits of Florida staying as close as four miles from the coast. Her cargo consisted of 6,000 tons of manganese ore, 300 tons of wool and 1300 tons of licorice root (“Survivors Statements” NARA2 and Uboat.net).

At the time of the attack she was at 26.13N by 79.59W and only 3.7 miles from the shore of Palm Beach according to Captain Roberts and fifteen miles north of the Port Everglades buoy (though one witness, Mrs. Louise Robins described them as 8 miles off shore and the official ONI gives the distance as 4.5 miles). The lookouts at the time were the Chief Mate on the inshore wing of the bridge (he was actually looking over the chart table at the time), Third Officer on the offshore wing, or the side of the attack, an ordinary seaman on the monkey island (top-most point of the ship that can be stood upon), and an Able-bodied seaman on the open boat deck. The submarine was never seen. Navy signals were flying from the yard arm and the ship was making 11 knots through the water but an additional three knots pushed by the Gulf Stream for a total speed over the ground of 14.5 to 15 knots.

At 18:32 German time Suhren’s G7e torpedo struck the starboard side of the Ohioan from the seaward or Gulf Stream side. In the words of her master, the ship sank “immediately”. The visibility was described as “excellent” and the sea smooth when, according to Captain Roberts, he was shaken awake by “…a dull thud with a shake of the ship like a blast in a rock quarry a mile away. I ran to the bridge but there was no chance to maneuver. … All men climbed on rafts. I found a ladder floating and climbed on it. I was picked up by a man named Robbins in a private launch” (“Survivor Statements”). He later said that all four lifeboats went down with the ship, and of the four life rafts one was swamped, there was no time to launch the other, and two were freed by the explosion caused by the torpedo.

Sadly nine men were lost to drowning, three to the explosion of the torpedo, and three to unknown causes, for a total of 14 killed, with 22 saved. The rescue was quite extraordinary and bears re-telling here verbatim in the words of one of the rescuers from the Robbins family (note that even the daughters contributed by leaping into the sea to make room for survivors):

We were on Bill Jebb’s boat and I had been watching a single freighter heading North, because in the glorious clear light of that especially calm morning, she appeared to me to be camouflaged. Our struggle to free the anchor and take in Bill’s life buoys for the summer had been complete. We were about to take a much needed swim.

Suddenly Mary yelled, “Look Mummy, that ship has been torpedoed!”

We looked and were paralyzed at what we saw. There she was with what appeared to be mountainous smoke hiding everything but her bow and bridge. Before we could grasp the reality of the situation, she had begun rapidly to sink.

Our decision to go to the rescue of the survivors, if any, was instantaneous. Bill ran to the wheel, Mary and Emily jumped overboard to make more room for survivors and I decided to go along. The reasons for my going were – first, in the event that anything should happen to Tom and Bill, I could take the helm and – second, because I figured that Bill would maneuver the boat, Tom haul on board the men, while I could administer first-aid, if it was needed. This is exactly the way it worked out. Only once Bill had to help getting the captain aboard, who was practically helpless, and I went forward and stood by the helm.

The SS Ohioian was hit by a torpedo about eight miles off shore, but it seemed not more than five minutes before we sighted her wreckage. Fortunately, Tom had taken bearings on her smoke, for the ship had completely disappeared from sight in two minutes.

Never have I been so petrified. Aside from the fact that we had heard of a submarine shelling a rescue boat only last week (there was not a plane in sight to force her to submerge), I was afraid I would lose my nerve should I see some horrible sights. In order to pull myself together, I hunted around below and found a Red Cross kit which I opened and put in a convenient place. Also, I turned Bill’s beautifully-covered mattresses in case they should be dirtied. Then I said a few prayers. As we speedily drew close to the remains of the vessel, I knew that I had myself in hand.

In the middle of a mess of what seemed miles of wreckage, the twisted specter of the ship’s bridge stood up. We skirted this terrible flotsam, searching for human life. There were so many black things all over that at first it was difficult to pick out anything. My first realization that any human still was alive was when I saw what looked like a floating timber slowly start to swim in the center of the silent mess. Gradually some of the black spots became little clumps of men strewn amidst the debris. (Sea Classics, Challenge Publications Inc. Jul 2005, findarticles.com/p/articles/mi_qa4442/is_200507/ai_n16061981)