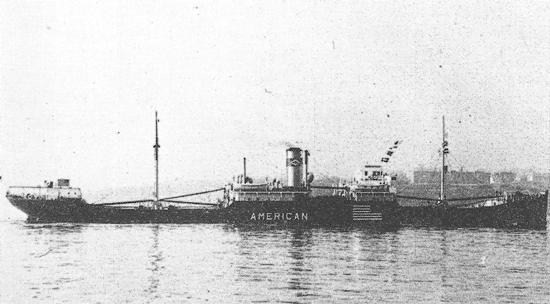 The City of Alma was completed in February 1920 by the Merchant Shipbuilding Corporation of Harriman, Pennsylvania and operated by the Waterman Steamship Company of Mobile, Alabama. Weighing in at 5,446 tons she was steaming between Trinidad and Baltimore on the 3rd of June when struck by U-172 under Carl Emmermann whilst northeast of the Bahamas roughly halfway between Bermuda and Anegada (at 23N/62.30W) (Uboat.net).

City of Alma’s original load port was Bombay, India, which she left on 10th of April 1942, proceeding from there to Cape Town South Africa and Port of Spain. On board she carried 7,400 tons of heavy and dense manganese ore, a kind of metal slag. American flagged and manned, she was registered to Mobile like many of her sister ships in a comparatively large fleet.

At the time of the attack, at 2210 ships’ time (10:10 PM) on the second of June, 1942, the weather was overcast but moderate and the ship was steaming northwest with a draft of 26 feet. The Chief Officer stated that the ship was following Admiralty routing instructions, with three lookouts posted, however he was to protest these following the casualties. She steamed at 9.5 knots without zigzagging. The “Reports on US Merchant Vessel War Action Casualty” filed in the NARA1 (Naval Archives) in Washington DC indicated that the US Maritime Commission controlled the City of Alma at the time by virtue of a charter.

According to the Chief, the ship was abandoned in a mere two minutes and sank in three minutes after a single torpedo penetrated the machinery space on the port side mid-ships. Of the four lifeboats only one was sued as there as “no time” for the others to be launched. They were rescued by an “allied ship” 45 miles off San Juan, Puerto Rico after four days. Twenty six men lost their lives – six officers, including the Master, James Joshua Baker and Chief Engineer Charles L. Warner, the Radio man, Joseph H. Simpson, and nineteen unlicensed crew. Of the two officers and eight crew rescued, two were injured. They were picked up by the US Navy patrol boat USS YP 67 (for Yard Patrol – also called District Patrol) and delivered to San Juan.

“Brown, having been thrown into the sea, swam through the thick debris and remained afloat on an improvised raft until daybreak. After locating and assisting to the raft five widely separated shipmates, some of whom were injured, a capsized lifeboat was recovered. Brown succeeded in righting the lifeboat after diving beneath it and puncturing one of its tanks with a hatchet he had salvaged. Aboard the lifeboat he gave orders to cruise the area and came upon four other crew members in the water. Brown unhesitatingly swam to and assisted each safely aboard the craft. A makeshift sail was rigged, course set, and port reached four days later” (Usmm.org).

YP-67 had a colorful history of her own – built in 1925 for the Revenue Service (US Coast Guard) and commissioned as the USS Dexter in 1926, she sank the Canadian rum-runner I Am Alone off Louisiana in what was technically an act of war in international waters (the legal claims dragged on for three years and cost over ten times the value of the boat). Requisitioned by the Navy and renamed YP-67 in 1936, her career took her from the Great Lakes to the shores of Europe, from attacking U-Boats of Halifax to convoy duties to the Caribbean.

After the war she was sold to the Boston Fuel Company, turned into a 150-passanger fishing boat named Kingfisher. In 1960 the Wagner Charter Company purchased her and renamed her Jamaica II, then in 1961 she was moved to a charter fleet in Chicago and named the Trinidad. In 1993 she became the Buccaneer and was operated as a “pirate vessel” on the Chicago River up to 2001 – the charter firm is out of business (wagnercharter.com/history)

Here is an email I exchanged with another enthusiasts with further pieces to the puzzle: