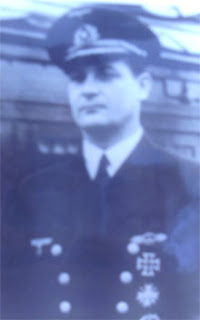 The third-to-last patrol through the Bahamas of 1943 was mounted by Hans Pauckstadt in the Type IXC/40 boat U-193 on the 17th of November. Entering south of Bermuda on that day the boat steamed west then west-southwest for the Northeast Providence Channel, which it obtained on the 22nd of November.

Motoring south of Abaco and north of Nassau, the boat emerged into the Gulf Stream on the night of 23rd November and turned to port around Great Isaacs Light. Proceeding down the Gulf Stream in the Straits of Florida, it cleared Key West on the 26th and exited the region into the US Gulf on that date. In a 122-day patrol the boat’s only victim was the US-flagged tanker Touchet of 10,172 tons, sunk in the US Gulf.

From Key West the boat rounded Cuba via the Yucatan Channel and re-entered the greater Bahamas region via the Windward Passage on the 29th of December. The 13th found U-193 south of Inagua, but instead of going through the Caicos or Crooked Island Passage Pauckstadt opted to turn east along the north coast of Hispaniola and then turn northeast, having passed to the south and east of the Turks & Caicos Islands.

Motoring northeast between the 1st and 6th of January 1944, the boat exited the area on that day south of Bermuda. However rather than return to La Pallice, where it as based with the Second Flotilla, the boat was forced to duck into El Ferrol, Spain due to urgent repairs after it was attacked by Allied aircraft on the 9th of February.

The re-positioning patrol from El Ferrol in neutral Spain (which required permission from the Spanish government to undertake) took five days for the submarine to arrive in Lorient, France. This patrol began on the 12th of October and U-193 refueled from U-488 east of Bermuda in late October. U-193 was attacked twice while in the Caribbean by USN aircraft.

The Touchet was to be the only ship sunk by Fregattenkapitän Pauckstadt. A member of the Crew of 1926, he survived the collision and sinking of U-18 ten years later. At the time of outbreak of war in 1939 he was an officer on the training ship Gorch Foch. After that he led the Fifth U-boat Flotilla. He commissioned U-193 in Bremen at the end of 1942.

At the time of the German surrender Pauckstadt was in command of the Eighth Flotilla (training) and another training flotilla. In total he acquired 185 patrol days at sea in two war patrols. Hans Pauckstadt lived until 1984 and the age of 77. U-193 was posted as missing from the Bay of Biscay on the 23rd of April 1944 without him – no precise explanation was been given for its loss.