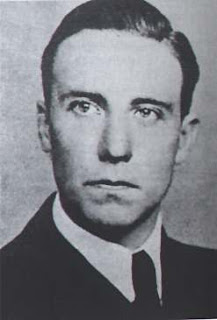 The next boat into the area was the Type IXC4 boat U-185 under Kapitänluetnant August Maus, ailing to and from Lorient in the Tenth Flotilla. Instead of approaching from the south of Bermuda, Maus took the western route and shaved quite close to that island on the 3rd of March 1943. From there the boat followed a conventional trajectory due south then southwest for the Caicos Passage between Mayaguana and Caicos, then north of Inagua into the Crooked Island Passage.
Turning south on the 9th of March U-185 entered the Windward Passage and steamed west, sinking the American Virginia Sinclair on the 10th of March off Guantanamo. The Sinclair was part of Key-West to Guantanamo convoy KG 123 and U-185 was understandably counter-attacked and forced to call off a second anticipated attack (Blair Vol. 2, p.219).

Over three weeks later U-185 returned via the Windward Passage and again found success in the area, sinking the John Sevier off the very southwestern tip of Inagua on the 6th of April two days after its transit of the Windward Passage. The Sevier was part of the GTMO or Guantanamo convoy 83. On the 7th of April Maus opted against re-entering the Crooked Island Passage and instead patrolled along the north coast of the Dominican Republic to the Mona Passage. At that point, on the 9th of April the boat swung to the northeast and homewards to Bordeaux, exiting the region on the 12th of April.

This patrol began on the 8th of February 1943 in Lorient and ended in Bordeaux on the 3rd of May. During the passage home U-185 was refueled by U-117 south of the Azores in mid-April (Wynn, Vol. 1, p.138). In a period of less than a month in a region where the defenders were highly organized and arguably dominant in such chokepoints as the Windward Passage, U-185 and Maus had extracted the sinking of three Allied vessels of 20,504 tons, a statistic made more impressive when one compares other, longer, empty-handed U-boat patrols to the area. Overall Maus accrued 229 days at sea on three patrols before being captured.

Twenty eight years old at the time of the two sinkings, Kapitänleutnant Maus achieved a total bag of nine ships of 62,761 tons plus one ship damaged for 6,840 tons. Later that year – in September – he was awarded the Knights Cross. Instead of returning to Lorient he must have been ordered to Bordeaux. Maus was a member of the Crew of 1934 and joined U-boats from cruisers and school ships in April 1940. He served under Merten in U-68 like Schäfer before him. Maus commissioned U-185 in June of 1942 and served on her until his capture.

On the 24th of August 1943 U-185 was caught and sunk in the Central Atlantic by three aircraft from the US escort carrier USS Core. During the next three years he moved from Tennessee to Arizona then the British Zone in Germany, after he succeeded in escaping in February 1944, only to be captured along with Friedrich Guggenberger in Tuscon Arizona. Becoming a successful businessman in Hamburg, he was to live until September of 1996 and the age of 81.