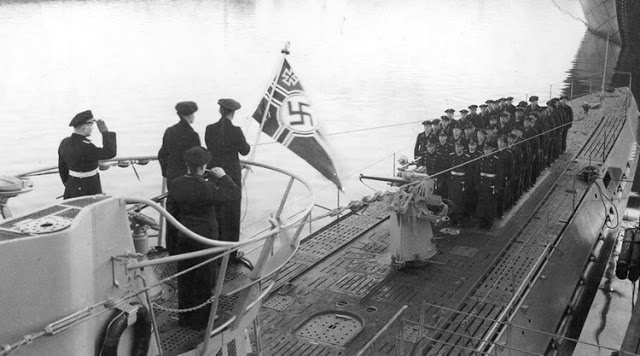 U-171 at its commissioning ceremony under Gunther Pfeffer.

Günther Pfeffer, aged 27 led the next mission into the area, arriving on the Type IXC boat U-171 south of Bermuda on 13 July 1942. It was to be the boat’s first and final patrol, as it was sunk on the return voyage after 15 days in the area. From Bermuda the boat took the conventional track for the Windward Passage – a straight line to a point between Mayaguana and Providenciales, from where it transited the Caicos passage to round Inagua from the northeast. From there U-171 entered the Windward Passage on the 18th of July and exited the region.

The boat proceeded to the Yucatan Channel and US Gulf where it was able to sink the Mexican tankers Oaxaca and Amatlan on the 26th of July and 4th of September. On the 13th of August it dispatched the US freighter R. M. Parker in the US Gulf for a patrol tonnage of 17,641.
It was to be almost two months before Pfeffer returned via the Windward Passage, on the 12th of September. Rounding Cape Mole in Haiti the boat opted to go east and south of the Turks & Caicos, then northeast until the 17th of September. At that point the sub took a 150-degree turn for the northeast tip of Puerto Rico for a day before resuming a course northeastwards on the 19th of September.

On the way from Kiel U-171 was refueled by U-460 in the central North Atlantic in mid-July. On the return voyage she was also refueled, this time by U-462 on around the 20th of September northwest of the Azores. It would meet its end on the 9th of October in the Bay of Biscay near Lorient. U-171 was sunk by mines with 30 surviving and 22 perishing – Allies at that point were able to sow mines from the air (Wynn, Vol. 1, p.129). Pfeffer would return to the region in command of a different submarine, U-170 in March of 1944.

Kapitänleutnant Günther Pfeffer survived the mining of his boat. A member of the Crew of 1934 went on to sink only one more ship aside from this patrol, for a career total of 22,304. He was the commissioning officer of U-171 at Bremen in October 1941. He also commissioned U-170. Pfeffer was awarded the U-boat War Badge in 1939. In 1944 he moved the U-548 from France to Norway to Germany. Pfeffer lived until the age of 51, passing in Bonn in 1966 after attaining the rank of Fregattenkapitän in the Bundesmarine.