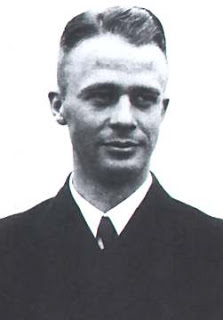 After two Italian submarines in a row, the next submarine to enter the area did so only briefly. U-161 under Albrecht Achilles transited out of the area via the Anegada Passage between 15th and 16th of March, 1942. He was returning to Lorient after a successful patrol in which he sank five ships (British Consul and Mokihana damaged, Circe Shell, Lihue, Uniwaleco sunk, Lady Nelson and Umtata damaged inside Port of Spain Trinidad, Sarniadoc and US Coast Guard tender Acacia sunk, for a total tonnage of 58,544 between 19th February and 15th March.

The patrol began on the 24th of January 1942 in Lorient as part of operation Neuland and ended in the same port on the 2nd of April. The boat was not immune to Allied counter-measures, and was attacked and badly shaken on the 3rd of March by a USAF B 18 from Trinidad. On the 21st of February Albacore aircraft dropped two bombs near the submarine causing no damage (Wynn, Vol. 1, p.124).

Achilles’ daring entry into the “Bocas”, or Mouth of the Dragon off Trinidad, which his officers had cruised as a merchant officer before the war, was widely recognized for its audacity and skill – particularly when it was learned that he escaped the Gulf of Praia with U-161 on the surface and running its navigation lights, so that the defenders assumed it was an Allied ship assisting in the rescue! The exploit is covered in admirable detail by Kelshall in The U-boat War in the Caribbean.

Achilles sank or damaged 20 ships in his career, one of them a warship sunk, another damaged. His tonnage bag includes 60,107 GRT tons sunk and over 44,000 tons damaged so he topped the 100,000 ton mark for which he was awarded Knights Cross in 1943. He was promoted from Kapitänteutnant to Korvettenkapitän posthumously after his death at age 29. A year after his incursion into the waters around Bahamas U-161 was sunk by a US Mariner aircraft off Bahia Brazil in September 1943 and all hands were lost.

Achilles had joined the U-boat force in 1940 and served initially under Richard Zapp in U-66. Over six patrols he accrued an impressive 435 sea days on the offensive. He would return to the area and claim the Fairport, with over 120 persons on board, all of whom survived.