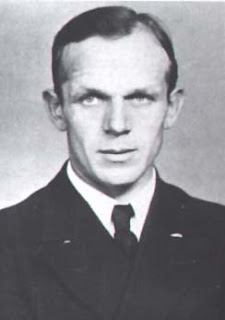 Erwin Rostin, killed with his crew between Bermuda and Bahamas.

The IXC boat U-158’s track shows the boat transiting the Northeast and Northwest Providence channels, making its commander Erwin Rostin the second U-boat skipper to pass close by the Bahamian capital Nassau. Having entered the area on the 24th of May, U-158 proceeded due west as far as the Bimini islands, then headed south on the 28th of May around Key West and into the US Gulf on the 31st. After nearly a month and a record number of attacks in the waters off Cuba, Yucatan and the Gulf of Mexico, U-158 returned via a similar route, past Havana, up the Gulf Stream and Straits of Florida, to West End Grand Bahama between 26 and 29 June.

At that point U-158 did three fateful things: he stopped the Latvian ship Everalda, took her commander aboard as a neutral captive, managed to secure vitally important allied signals and codes and routing instructions, and then he transmitted to Germany repeatedly about his exploits. This would be fatal, as the US sent an aircraft over the submarine’s projected position and on the 30th of June that airplane (a USN Mariner piloted by Lt. R. E. Schreder) succeeded in surprising the submarine on the surface and sinking it with an amazingly well-aimed depth charge which actually lodged in its deck plating.

The list of an astounding dozen ships worth 62,536 GRT sunk by U-158 on this patrol is as diverse as it is long: Darina of Britain, the Canadian Frank B. Baird sunk north and east of Bermuda on the way in in May, the Knoxville City (US), Nidarnes (Norway), Velma Lykes, Hermis and Scheherazade (both Panamanian), Cities Service Toledo, San Blas (Panamanian), Moira (Norway), and American Major Henry Gibbins  – all sunk in the Gulf of Mexico and adjacent waters. The Scheherazade alone was an impressive 13,467 tons and the Darina a further 8,113 GRT. These accomplishments earned Rostin, at age 34, a ranking amongst the “Top U-boat Aces” on Uboat.net.

One of the crew of 1933, Rostin joined U-boats from minesweepers in March 1941. On his first war patrol, without battle experience he sank five ships of over 38,000 tons. Ironically Kapitänleutnant Rostin was awarded the Knights Cross two days before the air attack which killed all aboard on 30 June 1942. The extensive radio communication between the boat and base is what enabled the allies to track the U-boat and accurately predict its position as it approached Bermuda, precipitating its doom.

Final attack showing a “heavyset” man who was slow or last to scramble down the conning tower. This is most likely the skipper of the Everalda, inexperienced with the exigencies of U-boat ops.

The Allied expression “loose lips sink ships” was turned on the enemy. Rostin was given the U-boat war badge posthumously on the 1st of July. He had sailed in the Tenth Flotilla out of Lorient, to which of course the boat was never to return. In the parlance of submariners around the world, the boat and its crew are “on eternal patrol.”

Had the submarine managed to reach German-occupied France with the Allied convoy signals and the Everalda’s confidential papers – which the Allies were aware, from survivors, were taken, the results would have been highly disruptive to the Allies and potentially highly effective for the Axis. This is another of history’s many “what if” scenarios.