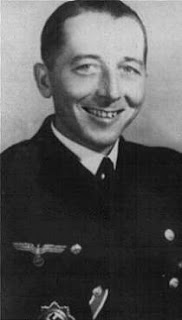 The second patrol into the region was led by Werner Hartenstein of U-156 on the fourth of February 1942. Unlike Hardegen’s brush with Bermuda, this patrol was a true incursion, with U-156 remaining in the region for most of the remaining month, two weeks of the interval taken up with a cruise inside the Caribbean proper. By sinking the Oregon on 27 February and the MacGregor a day later, Hartenstein contributed to the first half dozen sinkings in the region, only outdone by U-128 and others who achieved success in the crowded Straits of Florida a week earlier. The MacGregor was sunk off the Dominican Republic and the Oregon between Turks & Caicos to the west and the island of Hispaniola to the south (northeast of the MacGregor, as U-156 was heading home at the time).

On a chart U-156’s inward passage is shaped like the number “5” – he enters the area midway between Bermuda and Anegada (as many skippers did) heading west, then turns south, then southeast, and finally southwest into the Anegada Passage. Two weeks and five ship attacks later (on 25 February) he re-entered the area from the Mona Passage, headed northwest to the MacGregor, then in a straight line northeast towards the Oregon sinking and an exit of the region on 2 March south of Bermuda. That portion of his return looks like the letter “L” slightly tipped to the right. Overall it was a successful patrol for him, though it was not without military and diplomatic incident, as per this rendition from Uboat.net:

On 16 February 1942 U-156 “began to shell the oil refinery at Aruba in the Caribbean, the gun crew forgot to remove the water plug from the barrel, causing an explosion that killed one man [Matrosengefreiter Heinrich Büssinger]. The gunnery officer [II WO Leutnant zur See Dietrich von dem Borne] lost his right leg in this incident, and so had to be put ashore into captivity at Martinique on 21 February. The commander decided to saw off the ruined portion of the gun barrel, and using this shorter barrel, on 27 February U-156 sank a 2,498 British steamer” (the MacGregor) (uboat.net/boats/u156).

U-156’s patrol began in Lorient on the 19th of January and ended in the same port on the 17th of March 1942. It was part of the first wave of five U-boats in the Neuland operation, including U-67, U-129, U-161 and U-502. U-156 was the first one to return to France. On the afternoon of the 16th of February the boat withstood an attack by an American A 20 bomber off Aruba. The ships sunk in the greater Bahamas region were sunk by gunfire alone. As a result of this it was reported by some that the Oregon survivors were machine-gunned while in the water. Whether this was intentional or not – or even true – may never be verified (Wynn, Vol. 1, p.120).

Indeed U-156 and its commander were famous for two crucial events in the U-boat war – the second was his sinking on 12 September 1942 of the troop ship Laconia, laden with Italian Prisoners of War off West Africa. Four days later, after sending requests for assistance in the clear, he was strafed and bombed by US aircraft while trying to rescue a deck load of Italian and British survivors, leading Admiral Dönitz to ban all such rescue attempts. This so-called “Laconia order” was to have obvious ramifications to allied merchant seamen. The shelling of the oil refinery at Aruba, Dutch West Indies, led to that island’s imminent occupation by American troops.

Werner Hartenstein was 33 years of age at the time of his patrol, a member of the class of 1928 and a Korvettenkapitän. During the patrol (two days before he entered the region in fact) he was awarded the German Cross in Gold and was to earn the Knights Cross by year’s end. He was killed at age 35 on 8 March 1943 in an attack on his submarine east of Barbados, following five patrols of 294 days. Before joining the U-boat arm in March 1942 he completed 65 patrols in torpedo boats. On this patrol he additionally sank the Pedernales, Oranjestad, Arkansas, Delplata, and La Carrier, for a total patrol tonnage of 22,723 sunk (five ships) and 10,769 tons from two ships damaged. His total career loot was 20 ships for 97,504 GRT and three more damaged for 18,811 plus a 1,190-ton warship damaged.