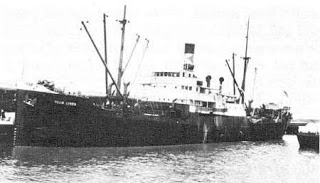 U-154 under Walther Kölle began its second of four patrols into the region on 25 June 1942. Both the inward and outward legs would be relatively brief transits into and out of the Mona Passage, with a total duration in the area of eight days. Two days after entering north of Anegada U-154 exited the region via the Mona Passage on the 27th of June, following which the skipper made an unconfirmed claim of a ship sunk northwest of San Juan. He did not return to the Bahamas area until July 31st. U-154 then patrolled briefly north of Puerto Rico in the first days of August.

The boat exited by the same route it arrived on the 4th of August, home bound for Lorient and the Second Flotilla there after a patrol of 81 days. The one ship and one fishing boat sunk by Kölle on this patrol were attacked of the southwest tip of Cuba, in the Yucatan Channel. They were the US-flagged Tillie Lykes of 2,572 tons and the Panamanian Lalita of 65 tons on the 28th of June and 6th of July respectively.

An unusual incident occurred on the 13th of July, when U-154 submerged leaving a crewman, the technician named Bahner, utilizing the toilet on deck. An airplane had been sighted while he was otherwise indisposed. Once the submarine was at 80 meters depth the man was reported missing. On surfacing the skipper saw gulls above the hapless crew, and he was fortunately rescued, though sharks were fired at during his retrieval (Wynn, Vol. 1, p.118).

The exploits of Kölle are outlined on his previous patrol. He would leave for shore duty after this patrol and be replaced by Heinrich Schuch and Oskar-Heinz Kusch.