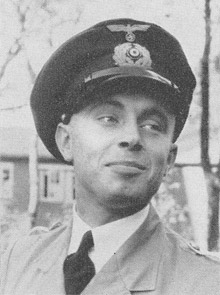 Oberleutnant zur See, Gerth Gemenier, from the Kriegsmarine Crew Photo. He was killed in 1944.

Next into the region was U-154 which was returning for its fourth mission there during the war, record tied with U-129. This time the Type IXC boat was led by Gerth Gemeiner. It entered the sector midway Bermuda-Anegada on a characteristic southwest course for the Caicos Passage on the 29th of February (1944 was a leap year). Until the 4th of March it steamed southwest and on that day cleared the northeast coast of Providenciales. Proceeding inward it rounded the northwest coast of Inagua and made to the southeast and the Windward Passage.

On the 7th of March U-154 motored passed Guantanamo (presumably submerged) and into the Caribbean. A week later it was attacked by the escort of a small convoy which the U-boat had engaged off Panama. Only minor damage resulted. Its return was to be brief. The U-boat made its way back utilizing the Anegada Passage.

By the 13th of March U-154 had exited the region for the final time after spending eleven days in the area. Having begun the patrol on the 31st of January, the boat was attacked in the Caribbean on the 15th of March by the US sub changer PC 469 off Punta Manzanillo Mexico. A five-hour depth-charge damaged the boat. Another attack occurred on the night of the 29th and 30th by the Columbian destroyer Caldas, though no damage was inflicted (Wynn, Vol. 1, p.118). It arrived in Lorient and the Second Flotilla on the 28th of April 1944.

Oberleutnant zur See Gerth Gemeiner sailed on two patrols with U-154 for 103 days (including this fruitless patrol of 89 days) before he and the boat were caught and destroyed by two Allied destroyers (Inch and Frost) on 3 July 1944 west of the Madeira Islands, Portugal. A member of Crew B of 1937, Gemeiner received no decorations before his death at age 25. On his two previous commands (U-146 and U-137) no war patrols were conducted, and Gemeiner does not have Allied ships sunk or damaged to his credit.