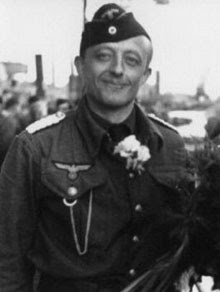 Fregattenkapitän Heinrich Schuch – he survived war. U-154 was sunk with all hands without him.

U-154 made its third of a record four patrols into the area on the 5th of November, with a short detour to the mouth of the Mona Passage a day later. Following this the submarine, under the command of Fregattenkapitän Heinrich Schuch on the boat’s fourth of eight patrols, headed east across the north coasts of Puerto Rico and the Virgin Islands to exit the region off Anegada on the seventh of November.

After his transit of a corner of the Bahamas “box” he sank three ships in less than two weeks; the 7,291-ton D’Entrecasteaux, on the 8th of November, the Nurmahal of 5,419 tons the next day and on the 18th the Tower Grange of 5,226 tons. All were British flagged and sunk northeast of the Caribbean (the first two) and southeast of Trinidad, off Suriname (the final ship).

This patrol began on the 12th of October in Lorient. Between the 22nd and 24th of October U-154 rendezvoused with a blockade-running supply ship named the Tannenfels. On her return voyage to Europe the submarine refueled from U-461 north of Saint Paul Rocks, which are northeast of Brazil. U-154 returned to base in Lorient on the 7th of January 1943.

As before the boat sailed for the Second Flotilla in Lorient – Schuch’s total score would amount to six ships sunk or damaged for 37,641 tons and one warship for 1,546 tons. Thirty six years old at the time, and a Fregattenkapitän since September 1942, he was not decorated and lived until January 1968 and the age of 61.

A member of the Crew of 1925, Heinrich Schuch commanded U-37 before the war, then after a stint on shore he commanded U-38 in 1941. When his next command, U-105 was so badly damaged by Australian aircraft in the Bay of Biscay that the Germans sought shelter in Spain, he was given command of U-154 in October, 1942. This patrol was his first in command of the boat, and lasted 88 days.

The U-boat was destroyed off Madeira on 3 July 1944 by the US Navy destroyer escorts USS Inch and USS Frost, taking all hands with it. By that time Schuch was not on board, as a consequence of which he survived the war.