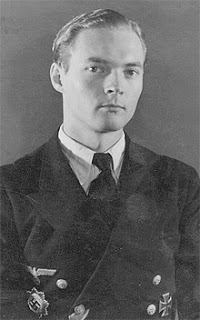 A day after Pauckstadt entered, U-129 began its fourth patrol the region under Richard von Harpe on the 18th of November 1943 – the first was under Nico Clausen. On the way to the Bahamas U-129 refueled from U-488 east of Bermuda. Entering westbound south of Bermuda the boat headed to a complex patrol area north and east of Grand Bahama and Abaco. On the 25th of November the boat entered the Gulf Stream off Walker’s Cay and sailed to a point off Jacksonville. Thereafter it zigzagged northeast towards Cape Hatteras and exited the area on the 1st of December.

A week later, on the 8th of December von Harpe returned, this time heading southeast for two days before turning west towards Abaco. On the 13th the boat turned due south to a point not far from San Salvador on the 15th, turned back north towards Hatteras, and left the region for the second time three days before Christmas, though this second incursion to San Salvador may have been the result of a clerical error (the skipper wrote the wrong geographical grid box coordinates in his log) and it is likely the sub actually remained off Hatteras and patrolled Bahamas only once on this voyage.

During this patrol U-129 was credited with sinking the 5,441-ton Cuban freighter Libertad off San Salvador on the 4th of December, however this misunderstanding was spawned by an erroneous log entry by von Harpe. Libertad was actually sunk off Hatteras and the rescue of her crew (and damage to US Coast Guard ships which went to their aid) is well documented by photographs in the National Archives in College Park, Maryland. Working with the author, the creators of Uboat.net changed the entry for this patrol accordingly.

Von Harpe’s career total was three ships sunk for a total of 17,362 of which the Libertad was his first sinking. These successes earned him the German Cross in Gold in 1944. Over his career von Harpe embarked on three patrols of 276 days. The boat sailed for the Second Flotilla out of Lorient.

Oberleutnant zur See Richard von Harpe was 26 at the time of this patrol and would be promoted to Kapitänleutnant in January 1945 before taking U-3519 on its only and final mission – it was sunk with its commander in the Baltic Sea on the 2nd of March 1945, a mere six weeks before the end of the war. Born in Estonia, von Harpe was an AuslanderDeutsche, or overseas German, for whom Hitler justified the first phase of the war (reclaiming lands lived on by German-speaking peoples).