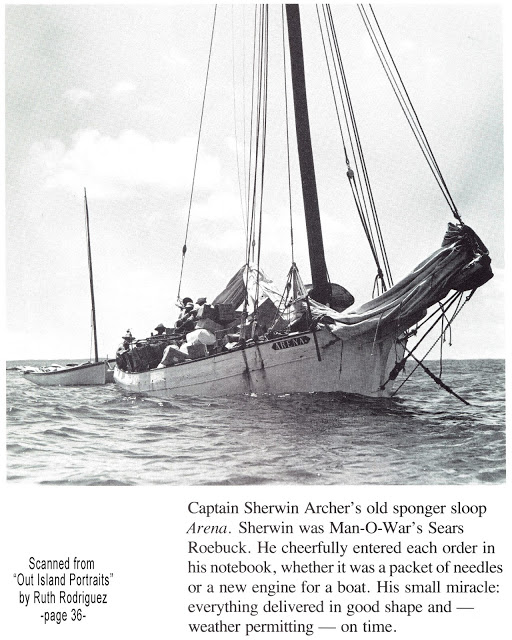 PAST NAMES: not known
DIMENSIONS: c.70 feet
CONSTRUCTION: wood
YEAR BUILT: not known – most likely 1890s to 1920s (during the sponging heyday)
BUILDER: not known – likely at an Abaco shipyard
EARLY CAREER: sponging on the Bahama Banks
BAHAMAS CAREER: after sponging collapsed was one of last sailing mailboats Abaco-Nassau through the early 1950s
CAPTAINS: Capt. Sherwin Archer
FATE: not known
NOTES: see below excerpt from the manuscript of “U-Boats in the Bahamas” (Eric Wiberg)
The inter-island sloop Arena under Captain Sherwin Archer left Marsh Harbor Abaco bound for Nassau on the afternoon of Friday the 6th of March, 1942. The motorized mail boats Stede Bonnett and Prescillahad been plying the trade from Nassau to Abaco, there was even an air service in the form of a 21-seat Catalina amphibious plane. Captain Archer and his son Bobby, the relief captain, used their 50-foot converted sponge fishing sailing sloop to supplement the service. His sloop was to ply the traditional trade for a decade from 1940 to 1950. Then, it was upgraded and an engine was installed. As well, the Arena was supplanted by the motor vessel Tropical Trader – and thus ended the days of sailing merchants between Abaco and the colony’s capital.