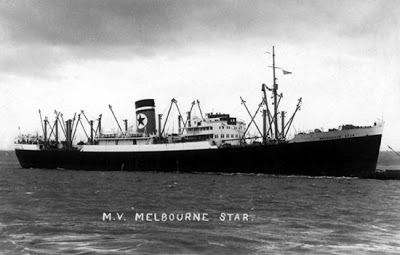 On this voyage the ship was deeply laden with torpedoes, ammunition, silk, and general cargo including twelve airplanes in crates on deck. Captain Hall kept his men busy – the ship zig zagged constantly, day and night. Also lookouts included two on the forecastle, three on the bridge and two on the aft gun. During the day one lookout supplemented the other seven aft of the bridge. These men had observed a ship hull-down on the horizon on the 30th of March and seen a Portuguese ship roughly three miles off on the first of April.

Witt and his crew lingered in the area until sunrise, then approached the raft. The German officer seemed perturbed to learn that no officers survived the wreck to speak to him. He asked the tonnage, departure and destination ports, and nature of the cargo. When Will learned that she was 12,000 tons he was elated, cheered, and yelled the good news up to his men on the conning tower. They in turn celebrated their substantial kill with loud “Heill Hitlers.”

After getting what they wanted from the survivors – without asking after their well being – the submarine motored amongst the wreckage for some time, without picking anything up. Then it steamed eastwards a few hours after sunrise. Witt was described as being roughly 34 years of age, slim, and in good health. The crew were said to be tanned and wearing khaki shorts. An emblem on the conning tower appeared to be a crest with the word “Hamburg” written in ornate script below it.
On board the only raft to survive the ordeal the men found eight tins of biscuits, other tins of chocolate, pemmican, malted milk tablets, and 22 gallons of water as well as two gallons of oil for massaging their skin (to protect them from sunburn). The biscuits, stamped 1942, were moldy and inedible and the water tasted oily.