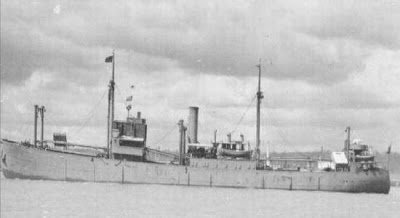 Medea was owned by the Royal Netherlands Steamship Company (Koninklijke Nederlandsche Stoomboot Maatschappij, or KNSM), of Amsterdam and was on government service at the time. Her cargo of 1,636 tons included highly flammable paint, benzene, chemicals and 220 crates of dynamite, destined for Maracaibo and other ports in Venezuela. Probably the dynamite was destined for use in the exploration and extraction of petroleum in the oil-rich Maracaibo basin. The name of her master is not readily available, however her crew numbered 28 persons, at least one of whom was Egyptian.

The convoy, composed of 34 ships in nine columns, was under the command of E. H. Thomas on board the British destroyer HMS Havelock. It was escorted by the British Flower Class corvettes HMS Godetia and HMS Lavender as well as an 110-foot submarine chaser named SC 533, and three 174-foot US Navy patrol craft named PC 463, PC 478 and PC 462. The convoy was en route from New York to Curacao, Dutch West Indies, via Key West and Guantanamo.

At 10:30 pm that night (only 40 minutes before the attack) Medea’s Chief Engineer observed what he presumed was the periscope of an enemy submarine 25 feet off the ship’s beam. He described it as moving upward and downward in “calculated mechanical movements”. It was painted blackish grey and roughly four feet tall. With his engineering mind he also observed dents in the dome of the object, which he observed were “probably causes by previous encounters with hard objects.”

At 11:07 pm local tie on the 12th of August U-658 under Hans Senkel fired four torpedoes into the convoyi in two spreads. Senkel saw a column of fire two minutes and ten seconds at 11:10, which is when the Medea was struck on her port side by a torpedo, disabling her to such an extent that the men abandoned ship. Senkel fired another salvo of torpedoes into the convoy at 2:05 am on the 14th of August, and believed that he had sunk two ships in total and damaged two others, however his claims were exaggerated. Only the Medea was damaged or sunk. U-658 was never seen by the Allies and escaped unscathed to attack convoy TAW 12 the following day.

The weather was fair with no seas to speak of, clear visibility, a fair wind, no moon and the other ships of the convoy in sight by the three lookouts. The lookouts were posted after on the gun tower, on the bridge and monkey island. The torpedo struck Medea on her port quarter near number three hatch and immediately ignited the chemicals and benzene and paints stored on her deck.
Medea slowed immediately and the crew, probably fearing that the 220 boxes of dynamite would explode, abandoned ship quickly in two life boats and rafts.

Four men did not make it off the ship. Presumably they were killed in the initial explosion or subsequent fire. The ship sank only five minutes after the torpedo struck, rolling over on its ports side and going down at 11:15 pm. HMS Lavender, at the front of the convoy, fired off star shells to enable her to search out the attacking U-boat. The merchant ship Lodestone was severely shaken by an explosion nearby, which it presumed was a depth charge but was more likely the end-run detonation of one of the five torpedoes which Senkel fired but which did not find a target.

While coordinating extensive but ultimately fruitless countermeasures (the Medea, for example, was armed but did not fire any reply before sinking), Commander Thomas on the Havelock arrived on the scene at 11:57, seven minutes after the attack, but there was no merchant ship remaining. Thomas found PC 478 and SC 533 picking up survivors from the life boats and rafts and thus resumed his anti-submarine efforts.

The 24 survivors were rescued by 25 minutes after midnight on the 13th of August roughly nine miles from Caleta Lighthouse, which was bearing 335 degrees. They were taken to Guantanamo Bay, Cuba where one of their members died. Eight of her crew were hospitalized – seven of the Dutch and one of the Egyptian. In total 23 men survived and 5 lives were lost in the sinking of the Medea. Overall Convoy WAT 13 escaped very lightly indeed when one considers the extensive damage which the five other torpedoes could have inflicted.