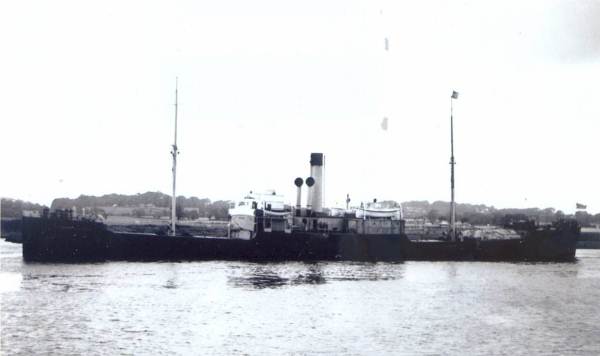 The 2,498-ton British steam ship Macgregor was built by the Forth Shipbuilding and Engineering Company of Alloa, Allmagh, on the Firth of Forth, Scotland. She was built as a standard World War I H-Type cargo ship in 1919 for her first owners, the Government Shipping Controller, London. Her first name was War Mellon for less than a year before the ship was sold to Hugh Hogarth and Sons Limited (owners of Iberia, Kelvin and Hogarth shipping lines) of Glasgow. They renamed her Baron Garioch and operated the ship up until 1935, the bulk of her life.

In 1935 the Guardian Line (Charles Alan Roberts) of London purchased the ship and renamed her the Macgregor. Except for a short period in 1937 when the Anglo-Canadian Shipping Company of Cardiff renamed her the Seven Seas Sound, Macgregor remained her name for the balance of her years. In 1941 Macgregor was bought by Sir Eric Bart Ohlson of the Ohlson Steamship Company (aka the Ohlson Line) of Hull, England. At the time of her demise she was managed by J. Hopper.

The Macgregor’s dimensions were 92.4 meters overall length, 13.2 meters wide, and six meters deep. A three-cylinder triple-expansion engine produced 265 net horsepower and propelled the ship at 10.5 knots. The ship was registered to the town of Adrossan in North Ayrshire, not far from Glasgow, where H. Hogarth and Sons, a previous owner, was based. The Macgregor was under the command of Captain William George Todman who led a complement of 30 other officers and men for a total of 31. Since the ship was armed she carried a crew of six naval gunners.

The ship left Liverpool in Convoy ON 60 on the 26th of January 1942 heading westbound across the Atlantic. The convoy was destined for Halifax, however the Macgregor at least one other ship – the Circe Shell (sunk by Achilles in U-161 on 21 February off Trinidad) split off from the convoy on or about the first week of February and sailed independently for the Caribbean. Altogether there were five ships of 21,194 tons sunk from this convoy and its dispersals alone.

Westbound across the Atlantic the Macgregor carried 2,621 tons of coal, which she appears to have discharged in the port of Castries, Saint Lucia, most likely during the second or third week of February. By the 24th of February the Macgregor had discharged her coal, loaded her tanks full of water ballast, and left Saint Lucia. She was bound for Tampa Florida in the US Gulf, and Captain Todman opted to cross the Caribbean for the Mona Passage, then proceed westwards along the north coast of the Greater Antilles islands (Hispaniola and Cuba) and up the Old Bahama Channel to the US Gulf. Considering that U-boat attacks in the region were a novelty and the first attack of Florida occurred just five days before her departure and would have been muted in the press, the men on the Macgregor could be forgiven for feeling relatively safe in the Caribbean, far from the war raging in Europe.

On the morning of the 27th of February at 3:40 am the ship had cleared Cape Samana, the Dominican Republic, an hour or so before – it was only 13 miles astern. Ahead of them by 28 miles was Cayo Francis Viejo, and they were on a course of 315 degrees northwest to pass it to starboard around daybreak. The ship had cleared the Mona Passage nine hours earlier, on the afternoon of the 26th. If there were U-boats menacing the Caribbean, well the Macgregor was out of that sea for the balance of her voyage.

U-156 under Werner Hartenstein, had had an active patrol. Since 16 February she had sunk or damaged five ships of over 24,000 tons in the Caribbean, and expended all of its torpedoes in so doing. Also, in a daring attack on the oil installations in the Dutch West Indies the men had blown the front off of their deck cannon and had to saw it off a third or so down the base. So the submarine’s weaponry largely consisted of a sawn-off-shotgun-type contraption on the bow and miscellaneous smaller-bore machine guns as well as a gun mounted aft. The submarine had spent over a day in the Mona Passage testing the forward gun, possibly using Mona Island as firing practice to find their range.

At 3:30 am in position 19.51N by 69.43W the Macgregor had three men on watch – a gunner aft and two on the bridge. She was blacked out, not zig zagging, the sea was slight and the moon was just setting. Suddenly, from only 600 or so yards astern came the clatter of gunfire and what appeared to be a simultaneous attack by two submarines firing from astern. The men were convinced that the submarines had been following them and waiting for the moon to set. Within minutes eight shells had struck the ship and machine gun bullets were ricocheting off the superstructure.

The six naval gunners sprung into action and managed to fire between six and eight rounds towards the muzzle flashes on the submarines. Meanwhile Captain Todman and the men on the bridge brought the stern to face the attackers and minimize the target. The Radio Operator managed to send of a total of eight SSSS signals – the “submarine sighted” transmission report which was rather novel for the are at that time.  Soon the Macgregors’ accommodation and deck areas were afire (the “cargo” of water ballast certainly wasn’t), and the Master threw the confidential codes in the water and ordered abandon ship.

As the men abandoned Hartenstein and his men continued to pour machine gun fire at the ship, a source of contention as it was felt they were trying to kill the men as they got into the boats. One man was indeed killed in the attack, exactly how is not given. The balance of the crew – 30 officers and men – boarded at least one lifeboat and cast off from the ship. It must not have been quite so orderly, as Captain Todman found himself swimming alone in the sea. The submarine passed so close to him in the water that he distinctly heard conversations in German wafting across the humid Caribbean air.

The Macgregor finally rolled over and sank, and U-156 motored off to the north. The following day a Dominican Coast Guard cutter found and rescued the men and landed them in Puerta Plata, on the north coast of the Dominican Republic. The survivors’ chief complaint was that they had not been armed with tracer ammunition which would have better enabled them to zero in on the men on the deck of the submarine. Their rationale was that once a battle between a U-boat and merchant ship is commenced, there is not much hiding the ship from the enemy, so that lights, flares, and tracers could be used, at least by ships sailing independently versus in convoys.