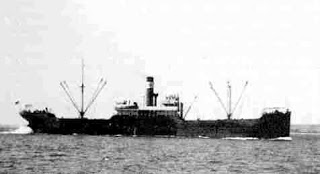 According to a US Coast Guard report the sinking of the Eclipse was just the beginning of activity off the Florida coast that week. Just as the requisitioned tugs Ontario and Bafshe released the Eclipse, “the escorts were ordered back, this time to attempt salvage of the SS Delisle which had been torpedoed just off Jupiter Light and was also aground. They never reached the Delisle. While the tugs were on route, the American SS Java Arrow, 8,327 tons which…was torpedoed…” (USCG report, p.31).

The Delisle was a steam-powered merchant ship of 3,478 tons which had been built in 1919 by the Hanlon Dry Dock & Shipbuilding Company of Oakland, California. Her owner was A. H. Bull & Company Incorporated of New York and her home port Baltimore. There were a total of 36 men under Captain William Washington Callis, of whom 34 survived the attack, as did the ship. This number included four passengers who are described as “stowaways” – one can only imagine their surprise if they were hiding when the attack occurred.

There were two men on lookout at the time. She was struck by Reinhard “Teddy” Suhren shortly after his attack on the Eclipse, at 22:00 on May 4th, 1942, at position 27.06N by 80.03W, just off Jupiter Inlet. Conditions were clear and the sea was calm. She was making nine knots southwards against the Gulf Stream en route Baltimore and San Juan, Puerto Rico with 2,800 tons of machinery, vehicles, asphalt and zinc concentrate. On her deck she carried highly flammable camouflage paint in large steel drums. Her voyage had originated in St. John’s Newfoundland and she had then steamed to New York before going to Baltimore to load.

First Mate Clark witnessed the first torpedo but no evasive action could be taken and the ship was struck mid-ship on the starboard side, beneath the bridge. The damage was described by the Master as “extensive hull damage” and included a 20 X 30-foot hole in the engine room below the main deck. A fireman, James L. Rose, and the Second Assistant Engineer, Wilbur Lowell Stine of Canada, were killed by the explosion. Neither the cargo nor the ship were reported by the master to have caught fire.

The ship was abandoned in eight minutes following the first torpedo. Captain Callis reported that only one of the two lifeboats was used, that two of the four life rafts was lost when it drifted away, one was not needed and one was shattered by the torpedo. They drifted on one raft with nine men and in one lifeboat with twenty-five men for two and a half hours before convinced that another attack was not imminent.

The crew included a Radio Operator described as defeatist by Mr. Clark, the Chief Mate, who had this to say about his crewmate when interviewed by Naval Intelligence: “…the radio operator has been reported anyway by now. He was the first one in the lifeboat, and the whole crew has it in for him. He has been giving us trouble the whole trip. …he always had a constant fear of being torpedoed or shelled and that was all he talked about day and night. He broke down everybody’s morale. When the time came, he was unprepared himself and shoed his true colors. His last name was Neal, of Towson” – presumably Maryland (US Guard summary of survivor statements, “Delisle, May 4, 1942”, p.10).

After the attack and landing ashore the crew re-boarded the ship at 0400 on the 5th of May. She was towed to Miami by a tug from the US Navy (the Bafshe and Ontario being busy with the Java Arrow and other ships). The captain reported that the men made shore at Hobe Sound after rowing for two and a half hours. This was the same wealthy enclave where the Republic and W. D. Anderson survivors sought refuge with blue-bloods.

Readers will recognize the recurrent Captain Seabrook of the Jupiter Island Lighthouse: “To Captain Seabrook fell the sad duty of recovering the bodies of the men killed on the Republic and the DeLisle for the Martin County coroner. Strangely, he had learned and practiced the embalming profession as a young man, which must have been helpful to him at this time.” (Jupiter Lighthouse – Tequesta : Number : 20/1960, pages 5-18, digitalcollections.fiu.edu/tequesta/files/1960/60_1_01.pdf)

Delisle was returned to service following repairs. Ultimately she was lost to a mine off St. John’s Canada which had been laid by U-220. She sank on 19 October 1943 – the mines were laid ten days previously. By that time she had a different master.