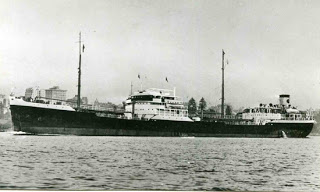 The Darina, like the ship Norland which she effectively betrayed herself trying to save by forwarding a distress message, was built by the Blythswood Shipbuilding Company Limited of Glasgow, on the River Clyde during the war and had a short life. Weighing 8,113 gross tons the tanker was launched in 1939 and operated by the Anglo-Saxon Petroleum Company Limited of Saint Helen’s Court, London. This is the same firm which lost the ship Anglo Saxon to the German raider Widder earlier in the war, two survivors of which washed ashore on Eleuthera Island, Bahamas in October, 1940. The Darina was on charter to the UK Ministry of War Transport.

Darina was 147.2 meters long, 18.06 meters wide and 10.27 meters deep. Her six-cycle diesel engine generated 502 n.h.p. and propelled her at 12.5 knots. She had left Stanlow, in the the UK on 6 May 1942 in convoy ON 93 and had been dispersed, along with the Norland, on the 17th of May.  She was bound to Texas City, Texas with 5,000 tons of salt water in the center tanks. Three days later, on the 20th of May, Darina was steering a course of 236 degrees west at 11.5 knots in approximately 18,000 feet of water. The five lookouts; a pair of them on the stern, one on top of the bridge on what is called the Monkey Island, and one on either side of the bridge wings. It was daylight, visibility was good, and the wind was roughly 15 knots from the southeast – the weather was clear and the seas moderate.

The day before the Radio Operators, V. J. Hickey and S. Woodruff, had picked up the SOS/SSS message sent by the Norland in the same general position. The Norland was attacked and sunk by U-108 under Klaus Scholtz at 31.22N and 55.47W, roughly 500 miles due east of Bermuda. Though launched in the UK in September 1941, the 8,134-ton Norland had been handed to the overseas Norwegian government and joined the “Nortraship” fleet of roughly 1,000 vessels trading for the Allies. The handover occurred on the 6th of May the day her voyage began in the UK in the same convoy – ON 93 – as the Darina.

Norland was hit with a torpedo, and counter-attacked the submarine, which found itself bereft of any more torpedoes and was forced to attack the ship by gunfire alone. Range alone saved the sub, which kept up fire from 8,000 meters, rendering the Norwegian guns ineffectual. All 48 survivors escaped in boats, but the 14 who were plucked from the sea by the Polyphemus on the 25th May were not out of the woods.

The Polyphemus, a 6,239-ton Dutch motor passenger and cargo ship on a voyage from Sydney Australia via Panama to Halifax and Liverpool, was struck by U-578 under Ernst-August Rehwinkel on the 27th of May 340 miles north of Bermuda. Though 15 Chinese crew were killed in the impact, all of the 46 Polyphemus officers and crew and the 14 Norland survivors managed to make it to shore either in Nantucket Island or New Bedford, Massachusetts. Some of the men had been discovered by U-566 under Borchert and given their position.

After relaying the Norland’s SOS and hearing that it was acknowledged by a land station in Bermuda, the Darina steamed on westward with a  ziz-zag course following naval instructions number nine. The submarine which attacked the Darina – U-158 under Erwin Rostin – was different from the one which struck the Norland, and there is no evidence from the record that U-158 heard the transmission, however the men in the Darina felt that their act of compassion in relaying the SOS call sealed the fate of their ship.

Since U-158 was sunk off Bermuda on its return from a highly successful patrol, whether or not the SOS message played a part in the submarine finding its prey may never be known for sure. It is equally likely that the Rostin found his prey the usual way – with constant vigilance over the open expanses of the ocean, coupled with superior speed.

At 4:55 pm in daylight on the 20th a torpedo struck without warning in the ship’s third or fourth port wing tanks, which were empty. Roughly 15 seconds later a second torpedo slammed into the port side the first wing tank further forward, also below the water line. The Darina immediately assumed an extreme list to port of 35 degrees, which was enough to inundate the rails in seawater. Yellowish and blue smoke wafted from below, and an acrid smell of cordite hung over the ship. Portions of the deck were blown upwards and cast iron fastenings throughout the ship were torn loose by the violent shuddering caused by the torpedo strikes. The staterooms at the center of the ship were badly damaged, their contents flung about in disarray.

Soon the Chief Engineer was able to fill starboard wing tanks number three, four and seven and thus bring the ship back to an even keel (she was trimmed down by the stern by about three feet before the incident, to give the propellers grip in ballast condition). However before the ship leveled off the man had already abandoned ship.

Rostin brought U-158 to the surface off the port bow at roughly 5:15 pm, distant about two miles. The sub cross the bow and swung around to the Darina’s starboard quarter, or flank. At 5:40 Rostin began to shell the ship. The fire was very rapid and effective, and concentrated on the engine spaces. One of the shells struck the oil bunkers, setting them afire. Before the ship could be abandoned three or four shells struck and after the men got away in the boats the firing increased to 16 or more shells. Some of the Darina men claimed to hear members of the German crew on the submarine yelling to one another, however they could not distinguish the nationality of the submariners, and nor did the U-boat approach the survivors to glean any information.

Darina had a 4-inch gun on the stern and a 12-pound gun on the port side, but both of them were useless given the location of the sub and the problematic list to port, which left the guns either pointing into the sea (on the port side) or the air (on the starboard side).  A distress message was sent by the Radio Operators who were at their stations at the time of the attack. If a reply was sent it was not received as the receiving equipment was smashed. Captain John Murray Cuthill’s orders to abandon ship were complied with in an orderly fashion.

The port lifeboat aft was shelled into splinters, and the starboard aft boat was being manned by the Second Officer when it too was shelled, killing four men out of the total crew of 56. Eight men were wounded by shrapnel. The forward port lifeboat (number two) was launched with 18 men, and the boat number one got clear with the Chief Engineer and 13 men. One raft with three men on it drifted away as well.

As soon as they could the two boats assembled with the raft and distributed those from the raft as well as the wounded amongst two boats. The next morning a fifth man died from multiple shrapnel wounds. The five dead men were buried at sea: Fifth Engineer J. T. Whitney, A. B. J. Mulvonn, Ordinary Seaman J. Gray and Naval Gunner A. Reynolds, and a Naval Rating named Miles.
Captain Murray’s boat (number one) with 18 on board was discovered the following day by the ship British Ardour early the morning of the 21st of May. The men were taken to Charleston South Carolina, landing on the 27th of May. There  James Turner Robinson, Galley Boy Harold Elliot and Fireman William McCarten were confined to Roper Hospital in Charleston with superficial shrapnel wounds.

First Officer C. P. Lane’s boat (number three) was separated from the other boat on the 21st of May at dusk. They sailed and rowed westwards for six and a half days, until the 27th of May, when it was discovered 150 miles south-southeast of Bermuda by the American steamer Exanthia. The fifteen men were landed in Norfolk, Virginia – photos of the men digging into their first hot meal in nearly a week are on file at the National Archives (NARA2) in Washington DC.

Sadly the Fifth Engineer, B. Watson died aboard the Exanthia, and his body was delivered along with the living to the Coast Guard vessel C 470 just off of Cape Henry, at the entrance to the Chesapeake Bay. The men were all landed at the naval base in Little Creek, Virginia at 8:20 pm local time on the 29th of May. Bosun J. Leadbetter, Deck Storekeeper A. Irwin, Second Cook A. Doyne and Military Rating David Orr were admitted to the Marine Hospital in Little Creek.

The 17 final survivors under Third Officer J. T. Brookland were rescued by the Norwegian motor ship Dagrun and put ashore in Cape Town South Africa over a month after their harrowing ordeal began, on the 23rd of June 1942. Thus 50 men from a total of 56 survived the sinking of the Darina.