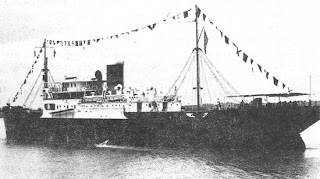 The passenger and cargo steamer Delmundo was a Hog Islander built by the American International Shipbuilding Company of Hog Island Pennsylvania in December 1919 for the US Shipping Board. She was originally named Clarona until 1932 when she was bought by the Mississippi Shipping Company Incorporated (known as the Delta Line) of New Orleans, Louisiana. Her agents in Cuba were the Lykes Brothers Steamship Company.

Delmundo’s weighed 5,032 gross tons, and her dimensions were 122.2 meters long by 16.5 meters wide and 8.5 meters deep. Here turbine engines propelled her at 11.5 knots. Her final round-trip voyage began in New Orleans on the 22nd of June 1942. She sailed for Buenos Aires Argentina via Brazil. On her return trip she loaded in Brazilian Ports and made for Trinidad, where she joined convoy TAW 12 bound from Trinidad to Key West. Her ultimate port was to be New York.

The cargo was 5,437 tons and was composed of roughly 5,000 tons of coffee and the balance was a hard wood nicknamed in Spanish quebracho, for “axe-breaker”, hides, wool, bones, casks of tallow and empty drums which were stored on the forward and after well decks. Her crew of 41 Americans were led by Captain Henry Peter Smith. The passengers numbered eight, of whom three were British, two Polish traveling on diplomatic passports, and , two were Americans. The ship was armed by one four-inch gun on the poop deck and two 30-calibre machine guns manned by eight Naval Armed Guard.

Captain Henry Peter Smith of the SS Delmundo, who tragically died of pneumonia ashore in Cuba.

Delmundo was nominated to carry the Convoy Commodore, a retired Lieutenant Commander in the US Navy named R. L. Lovejoy. As the convoy passed Guantanamo and prepared to round Cape Maysi 18 miles away and turn to port into the Old Bahama Channel it was being stalked by U-600 under Bernhard Zurmühlen, who brought his submarine into the group of ships. After picking off the Everelza at 02:48 and sending it exploding blew sky-high, at on the 13th of August and in position 19.55N, 73.49W, Zurmuhlen fired a second salvo of torpedoes at 02:58 am. The lookout on the aft gun, the two on the bridge and one more on the flying bridge never saw the torpedo coming.

It was a dark night but visibility was good, and the other ships in the convoy could be seen.
The Commandant of the Naval Operating Base in Guantanamo later commented that “It is clearly indicated that proper organization was lacking and Masters of vessels were lax in complying with instructions relative to showing lights and keeping closed up in the formation.” As soon as it was hit the ship stopped and fired two white flares. Since this signal came from the Commodore’s ship great confusion reigned.

The torpedo penetrated Delmundo aft on the port side, between the deep fuel tank and the engine room, trapping two men, Lee J. Rome and Oiler Fred Clifton in the engine room. The explosion of the torpedo nearly tore the ship in two. There was no opportunity to send a radio message, and the radio operator was not on duty at any event. Because the submarine was never seen the armed guard had nothing to fire at. In the ensuing destruction or the confusion of abandoning ship, Mrs. Beck, the wife of a 50-year old cost accountant from Britain was drowned, as was Mrs. Max Kleinblatt, 26 years of age and described as a Jewish housewife, and a Mrs. McQueen, first name unknown, were killed.

Both #3 and #1 lifeboat managed to get clear of the ship before it sank, however the davits crashed down on the #1 boat and sank it, drowning five people. The swiftness indicated the swift sinking of the bow section of the Delmundo. The two boats lashed outboard on the port side were destroyed by the explosion, and the steam lines and power lines were destroyed.  The engine rooms and fire room were flooded. The ship immediately started listing at 30 degrees. Within a few minutes of the torpedo strike the bow was seen pointing straight in the air, and the Delmundo sank in roughly 800 feet of water.

Though Captain Smith and the gun crew remained on board the ship until the last moments, they managed to get away. By 04:30 the Royal Navy destroyer HMS Churchill (I 45) under Commander P. J. Fitzgerald maneuvered into the convoy to rescued the 47 survivors, who were distributed on the #3 lifeboat as well as two rafts. They had been in the water only 90 minutes. Churchill remained behind to look for more survivors and is reported to have saved three persons swimming in the water. Though Captain Smith survived the sinking he died in hospital of pneumonia.
Commodore Lovejoy does not seem to have made the effort to rejoin the convoy, which was ravaged the following day off the Ragged Island chain in the Bahamas, with the loss of the Standella, Michael Jebsen, and Empire Corporal. Without its commodore the convoy was understandably in disarray.

The interviewing officer in Key West, Lieutenant J. C. Bowman, commented that Lovejoy “…knew little about subject vessel from standpoint of crew, ship’s armament, etc. He stated that Naval Intelligence interviewed captain and crew of vessel in Guantanamo… [He] further stated that it was his belief that the submarine fired from inside the convoy and remained underneath the convoy after the attack, following in its wake, which could account for the fact that  no contact was made by escorting ships before or after the attack.” (“Intelligence Report, Enemy Attack on Merchant Ships” Aug. 24, 1942, Miami Florida, 7th Naval District”).