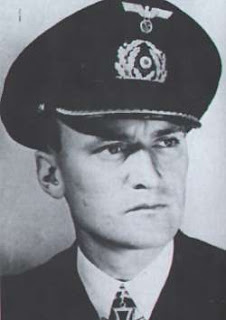 Photo source: http://www.uboat.net/men/gelhaus.htm, who obtained it from Herr Gelhaus himself

Kapitänleutnant Harald Gelhaus brought his charge, the Type IXB boat U-107, on a grand sweeping tour of the region from Hatteras to the southeastern tip of Cuba via the Straits of Florida and then out through the Mona passage and homebound south of Bermuda during May and June 1942. On the way out of Biscay U-107 met with U-123 to exchange codes and information.

The patrol in the greater Bahamas area began off Savannah on May 22nd and for the next week U-107 proceeded southwards along the eastern coast of Florida and west of Grand Bahama, Bimini and Andros via the little-used Santarem Channel. He then entered the Old Bahama Channel on the 27th and made for the Windward Passage, where he dispatched the Bahamian-owned, Canadian-crewed Western Head on the 29th just outside the area.

On the first of June Gelhaus sank the Bushranger south of Cuba – the ship had rescued the survivors of the Kollskegg and taken them to Nassau two months earlier. A week later the Castilla, Suwied and Merimack fell to U-107’s torpedoes, followed by the little American schooner Cheerio, which Gelhaus sank in the Mona Passage prior to re-entering the area on the 19th of June via the Mona Passage off Puerto Rico.

For some reason Cressman in his Official Chronology of the US Navy in World War II credits the U-161 with sinking the Cheerio, an error repeated by Gaylord Kelshall in The U-Boat War in the Caribbean, however U-161 was rushing to rendezvous with the U-156 to the south in the Caribbean at the time of the Cheerio sinking.

On his way home Gelhaus sank the large passenger Jagersfontein, a Dutch ship which had also been involved in rescuing survivors of torpedoed ships. His total catch for one patrol was seven ships for 27,018 tons, all sunk – three of them US-flagged, the others British, Honduran, Panamanian and Dutch. Heading north-northeast from the Mona Passage Gelhaus seemed to be steaming in a Rhumb line (straight course) for France and Lorient when on the 22nd of June he changed course to the north-northwest and passed just west of Bermuda.

On the 23rd U-107 rounded Bermuda and headed east-northeast for Europe, on the way home encountering the Jagersfontein. Laid out on a chart the track of this patrol looks like a large “U” or a basket, the bottom of which is the north coast of Cuba and the opening a gap between Savannah and Bermuda between the points where the boat entered and left the zone. Late in June U-107 met with and refueled form U-459 northeast of Bermuda (Wynn, Vol. 1, 89).

Over a career Gelhaus served 343 days in six patrols aboard U-107 and a further 82 days aboard U-143 earlier. His total tonnage was 100,373 sunk in nineteen ships and one ship damaged for 10,068 GRT, passing the threshold of 100,000 tons which for a time was seen as a pre-requisite for a Knights Cross. Promoted to Kapitänleutnant in April 1942, he was awarded the Knights Cross in March of 1942 and the U-boat Front Clasp in October 1944.

Harald Gelhaus joined the navy in 1935 and served on the Battleship Gneisenau before joining U-boats in October 1939 at the outbreak of war. U-107 had made a name for itself under Dönitz’ son-in-law Günther Hessler. Under Gelhaus it would chalk up a further 100,000 tons-plus of Allied tonnage sunk. Gelhaus joined High Command of the German Navy (OKM) in June 1943 before leading training for the 22nd and 27th Flotillas in the Baltic. He lived until age 87, dying in 1997.