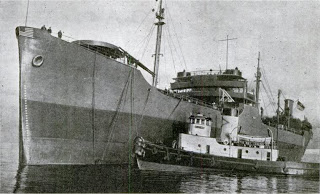 The Cherry Valley was a 10,172-ton T-2 (turbine tanker) built for the US Maritime Commission in 1942. She was constructed at Sun Shipbuilding and Dry Dock Company of Chester, Pennsylvania. Her owners were Keystone Shipping Company of Philadelphia, Pennsylvania, a firm which is still in operation today. The Master described the owners as Kaymar Tankers, Incorporated, and the Charterer as the US War Shipping Administration.

On the voyage in question the Cherry Valley was under command of Captain John H. Rose. Here total crew were 79 men including eleven officers, 40 crew and 28 naval gunners. The gunners operated a five-inch gun, another three-inch gun and eight 20-milimeter machine guns. Her itinerary was to sail unescorted from New York to Aruba. Aside from 6,000 tons of ballast water all she carried was 165 tons of cargo for the US Army in Aruba.

On the morning of the 22nd of July 1943 the Cherry Valley was in position 25.10N and 68.35W, which is east of Eleuthera about 300 miles, about 400 miles north of Peurto Rico and 500 miles southwest of Bermuda.  The ship was making 15.5 knots on a zig-zag course generally southward. The moon was waning and very clear making visibility excellent for night time. The seas were smooth, wind was from the southeast at only 3-5 knots and the sky was clear. There were eight lookouts on watch; two armed guard each on the bow and aft guns, and one on the bridge. There were also merchant seamen on watch at the bow, and on the bridge, with the Third Mate on duty in the wheelhouse as well.

At 3:21 am local time two torpedoes 15 seconds apart struck numbers six and seven tanks on the starboard side. This caused the ship to list 10 degrees to starboard right away, however by emptying the number one starboard tank, which held ballast, the men were able to trim the ship back to an even keel. It was as if they simply transferred existing ballast water from one tank to another by compensating for the formerly empty full tanks by emptying a full one.

The engines and steering equipment remained functional so the ship continued steaming southwards at 13 knots. At first the ship was steering 156 degrees true or south-southeast, however after the initial attack the course was amended to 220 degrees true south-southwest, then back to 156 degrees true. She could no longer zig zag because of damage sustained.

The attacker, Friedrich Markworth in U-66, came in for another attempt at 5:30 am, when both sub and ship were at position 25.00N and 68.33W. U-66 fired two torpedoes from the ship’s starboard side, however both of them missed and the Cherry Valley kept steaming. The men on the ship saw one torpedo passing ahead and another astern. The ship was turned “hard a starboard” into the torpedo wakes from 160 degrees to 250 degrees true. The torpedo off the bow missed by only 20 feet.

U-66 was sighted on the surface off the ship’s starboard bow, heading 160 degrees true south-southeast, on a parallel course to what the ship had been steering. She was estimated at 2,500 to 5,000 yards distance. The ship immediately turned 90 degrees and onto a course of 340 degrees true, putting the submarine dead astern of the ship. The submarine immediately crash dived and was not seen again. At that point the gunner opened up from Cherry Valley – one shot was fired from the 5-inch gun aft and 12 shots from the 3-inch gun forward. Most were considered over or under shot, but some were seen to fall in the wake of the submarine. None were considered fatal, or could even be considered as the primary deterrent to the submarine.

The ship then resumed its original course of 160 degrees true a 13 knots. Attempts were made throughout the attack to send an SOS or SSS, however all aerials except the main one were damaged, the antenna was grounded, fuses were blown and it took some hours to repair it. When they were repaired at 6:30 am the message was acknowledged by Bermuda, Norfolk and San Juan. Jupiter Florida passed it on to Miami Florida who passed it to Washington DC “for action.” This was three hours after the first attack and one hour after the second.

Meanwhile Lieutenant Hillman in charge of plane number 105 B-1 based in Saint David’s Bermuda set off on a routine anti-submarine patrol to the south of Bermuda at 6:21 am that same day. Under an hour later, at 7:14 am, Cable and Wireless passed on a distress message to an operator at the Flatts station. From the message, “SSS DE KIJG LAT. 2430 N LONG 6815 W TORPEDOED”, they took a bearing and found the ship was bearing 207.5 degrees from Bermuda. At 7:40 Hillman’s plane was ordered to the scene. At 08:48 am another aircraft, 201 P4 was vectored there as well, however a faulty engine caused him to turn back for Bermuda.

Hillman conducted a box search and succeeded in contacting the Cherry Valley at 11:00 am. Having been met with men cheering on the deck, he remained in the area for two hours, heading back for Bermuda at 1:00 pm and landing there at 4:13 pm.

The Caribbean Sea Frontier informed Bermuda that two VP aircraft arrived at the scene at 11:00 am, however Hillman’s aircraft was on the scene and neither he nor the ship observed any other aircraft. Another aircraft, 201 P-12 left Bermuda at 11:54 am to search the area but found nothing and was forced to return at 3:30 pm. Lieutenant Hillman returned at 4:13 pm and reported that he found the ship at 24.10N 68.25W and received a message by blinker from the Captain which read:

“Master requests surface standby until ship reaches port. Sheered strake, only thing holding ship together. Plates abuckle.” There was a 20-30 foot round hole in starboard side at the waterline right behind the bridge. The ship was described as listing heavily to starboard and trailing oil. Although there were occasional thunderheads the sky was described as 4/10ths overcast. He added that the “Crew on deck jumped and waived [sic] wildly at sight of patrol plane.”

Two days later the Cherry Valley managed to make it to San Juan Puerto Rico under her own steam at 30 minutes after midnight on the 24th of July. She was escorted into harbor by the Dutch naval corvette HNMS Jan van Brakel. There are photographs in the US National Archives showing the Jan van Brakel escorting the stricken ship to her berth. Also photographs on file show the extensive damage wrought by the torpedoes. From the 25th of July the Cherry Valley was repaired in the US Navy dry dock at Ensenada Honda in Roosevelt Roads, Puerto Rico. At least in the short term the officers and crew remained on board their ship during initial salvage.
The Cherry Valley survived the war and lasted until November 1971 when she was broken up at Kaoshiung, Taiwan.