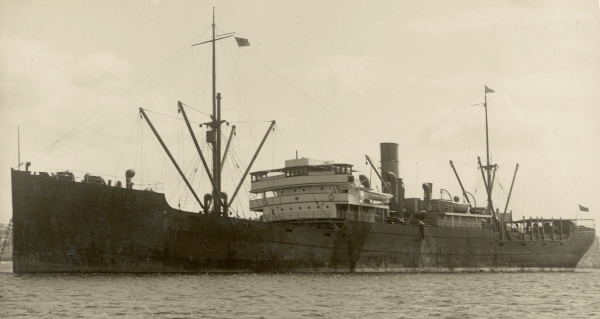 SS Cornwallis under her previous name of Canadian Transporter.
Source: State Library of New South Wales, Australia. uboat.net/allies/merchants/ships/3382.html
The Cornwallis was a steam ship of 5,458 gross tons which was the 20th ship built by J. Coughlan and Sons of Vancouver, BC. Originally from launch in 1921 her name was Canadian Transporter and she was in the service of the Canadian government, then in 1932 she was transferred to the Canadian National Steamships Limited of Montreal and renamed Cornwallis, with HMCS standing for Her Majesty’s Cargo Ship.
The ship’s dimensions were 400 feet long by 52.5 feet wide by 28.5 feet deep. A single steam engine generating 370 net horsepower by John G. Kincaid & Company of Greenock, Scotland propelled here steel hull at 11 knots. On her final voyage the Cornwallis was under the command of Captain Emerson Horace Robinson, age 36 and the husband of Edith. The first mate was Roy Littlewood Couves, age 26, the Chief Engineer was Philbert Harry Dine, and the head of the Royal Canadian Navy Volunteer Reserve units was Leading Seaman Edward James Maughan. As it was, none of these men would survive the subsequent attack by a U-boat.
Cornwallis was no stranger to U-boat attack, having been struck and damaged by U-514 under Hans-Jürgen Auffermann on the 11th of September, 1942 in Bridgetown harbor, Barbados. Repaired, she was placed back in service. There was a total of 48 persons on board the Cornwallis when she loaded a cargo of sugar in bags as well as barrels of molasses in Barbados in November 1944. These included seven gunners or armed guard and one British “DBS.” The ship carried no deck cargo.
After leaving Barbados on the 20th of November, her routing instructions were for the ship to discharge in St. John, New Brunswick, and for Captain Robinson to take her through the Cape Cod Canal and thereafter along the coasts of Massachusetts, New Hampshire, Maine and into the Bay of Fundy to her destination. Her captain and crew were Canadian except for one Dane, and she flew the Canadian ensign from the mainmast. There was a 4-inch gun aft, a 12-pound gun in the forecastle, two Oerlikon machine guns after and a pair of machine guns on the bridge, none of which would be fired. Her speed was about 9.5 knots.
Thus it was that on Sunday the 3rd of December the Cornwallis found itself between the navigational aid at Mount Desert Rock and the rugged Maine coast at Matinicus Rock, and into the periscope crosshairs of the German submarine U-1230 under Hans Hilbig. The ship was heading northeasterly and no longer zig zagging – she had her running lights turned on, which is unusual for wartime, and a “dim white light on foremast” – again attracting attention to itself from nearby submarines. At the time conditions were clear, the seas smooth but hiding a strong current typical of the Maine and Fundy coasts. There was a full but waning moon and no other vessels were visible. U-1230 was never sighted by any of the survivors.
Probably the Canadian sailors felt they were close to home already, but whatever complacency they may have been feeling was shattered just after 6 am by an explosion up forward by the #1 cargo hold on the starboard, or seaward side. The cover of the foremost hatch was blown skyward. There was a smell of cordite explosive powder but no fire. It was to take fewer than ten minutes for the ship to sink by the bow into the frigid waters of the Gulf of Maine in December. By then she was listing drastically to the starboard side.
Since there were only five survivors out of 48, the men that made it were unsure whether an SOS was sent, however Yarmouth Nova Scotia’s radio station receive a “submarine sighted on surface report” at 6:05 listing “off Desert Rock” as the location, which presumably the Cornwallis’ radio operators were able to transmit. The five witnesses were situated in their crew accommodation aft when the standby watch called all hands on deck. They tried to lower the amidships lifeboat on the starboard side but it got caught on the metal davits and “smashed.”
As the ship rapidly sank to 300 feet of ocean, these men – two able-bodied seamen, two deckhands and a fireman – swam or were washed into the water, and they managed to make it to life rafts which floated free when the Cornwallis sank. One of the fortunate survivors was crewman James Vincent Bonnar, who was photographed with three of his compatriots shortly after their recovery. 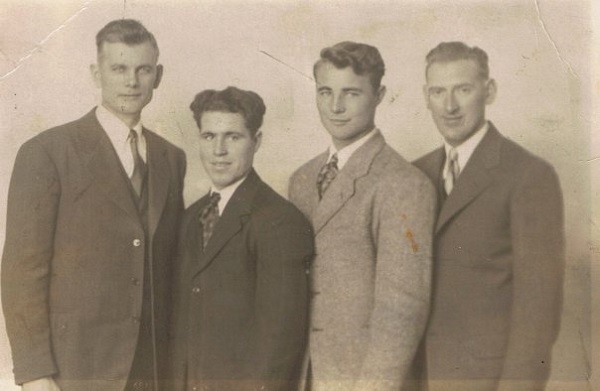 Four of the five survivors of the Cornwallis tragedy. Cape Breton Deck Boy James Vincent Bonnar is third from left. Source: Ms. Michelle Bonnar, uboat.net/allies/merchants/crews/person/75992.html
Later that morning airplanes (specifically aircraft JR-4 out of Brunswick NB) sighted the rafts, and vectored the fishing boats Ivy M and one other to them. The Ivy M. took three men on board and the other fishing boat took two from a total of three rafts which they found 10 miles from Mt. Desert Rock bearing 240 degrees. The exact position given was half way between Mr. Desert Rock and Long Island. After they rescued six the fishermen transferred them to the US Navy rescue vessel crash boat # 26597 out of Southwest Harbor, Mt. Desert Island, by 6 pm.
Out of the six, one died from exposure en-route to shore. Ultimately the men were taken to shore at Rockland, Maine, landing around 10 pm that night. At first fishermen had the macabre task of recovering at least five bodies, since initially “air and surface craft searched the area of Mt. Desert Rock with negative results,” on the intelligence of the SSS signal received in Yarmouth.
Then at about 11:30 am a fishing vessel “reported sighting barrels and bodies 8 miles WNW of Mt. Desert Rock.” By 1:32 pm the naval air station in Brunswick’s planes confirmed sighting men on a pair of rafts 20 miles south of Mt. Desert Island. A coast guard vessel named Snohomish recovered four bodies and as it became dark requested instructions from Rockland as to how to proceed.
Part of the confusion may stem from the significant difference between the very large island named Mt. Desert and the comparatively tiny and specific location of Mt. Desert Rock. Naval authorities rationalized that the Cornwallis was unlikely to have been mined because of rarity of commercial shipping transiting the route in question, and the water was too deep for most moored mines.
Once in Rockland Soren Christensen of Skagen Denmark was treated for shock and exposure at the US Coast Guard dispensary. Also treated were John Buffett, a Canadian AB from Cape Breton, James Bonnar, Canadian deck boy Albert Lasaga from Sandy Point Newfoundland, and Canadian Elmer Cossman, a Canadian Fireman from Halifax. A cook named Ted was seen to drown, and the bodies of John James Murray, K. V. Huppe were handled as well.
Meanwhile a counter-offensive was launched with the dispatch of USS Mervine, USS Davison Tillman and USS Quick to conduct submarine search southeast of the position where the Cornwallis was sunk. Later more vessels – USS Buckley, USS Reuben James, USS Scroggins and USS Hubbard were all ordered to the scene to hunt and destroy the U-boat as well. Even the aircraft carrier USS Bogue (CVE 9) was sent to the scene from New York with appropriate destroyer escorts.
U-1230 survived not just the patrol and intense counter-offensive, but the war. IT was scuttled off Great Britain on the 17thof December 1945, just over a year after its attack on Cornwallis. In fact the U-boat had only been commissioned since end January, 1944. Hans Hilbig lived until 2004 and the age of 86, unlike all but five of the men on the Cornwallis.