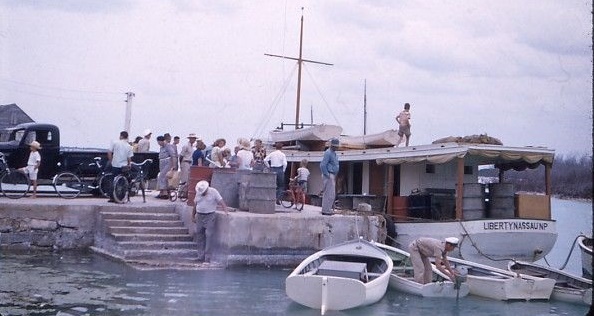 This is an extraordinary photo of a snapshot of life in Spanish Wells in the 1950s or so.

Can you, also note the similarities of this vessel with the LIBERTY? Note the narrow stern/transom, the 4 X 4 or so wooden rails, the single deck, and the large prominent cross-trees above the wheelhouse… I think this is actually the LIBERTY, same vessel, leaving Fresh Creek Andros in the early 1980’s, indicating that she had a busy and diverse career spanning over four decades and various island groups. Unfortunately a somewhat often-used name like “liberty” makes it harder to research… Even the tires are hung from the same stanchions, if you look closely!

MAILBOAT NAME: M/V LIBERTY
PAST NAMES: not known – probably none
DIMENSIONS: 45 foot long motor trader
CONSTRUCTION: wood
YEAR BUILT: probably either 1943, 1941, or 1946 thereafter, based on years they built other boats
BUILDER: Earl & Gerald Johnson of Harbour Island. Earl was born 1905, died 1981 so probably built 1940-1950. Earl and his brother Gerald built several other mailboats, including M/V GARY ROBERTS, 1942, M/V WILLIAM SAYLE, 1944, and M/V CAPTAIN ROBERTS, 1945, for George W.K. Roberts except for the William Sayle, which was built for Roland T. Symonette.
EARLY CAREER: mail route Nassau – Spanish Wells & Eleuthera – appears to have traded Andros, Fresh Creek in southern Andros per Eddie Spurgur and photo below….
BAHAMAS CAREER: mail route Nassau – Spanish Wells & Eleuthera
CAPTAINS: not known
FATE: not known
OWNERS: not known
NOTES: Here is what the exceptional research historian Mr. Kendal Butler found, in reply to this query: “The only listing I have for a craft by the name of “Liberty” was built by Earl Johnson (1905-1981) of Harbour Island. This 45ft craft was a mailboat. In fact Johnson built four other mailboats along with some other craft.” 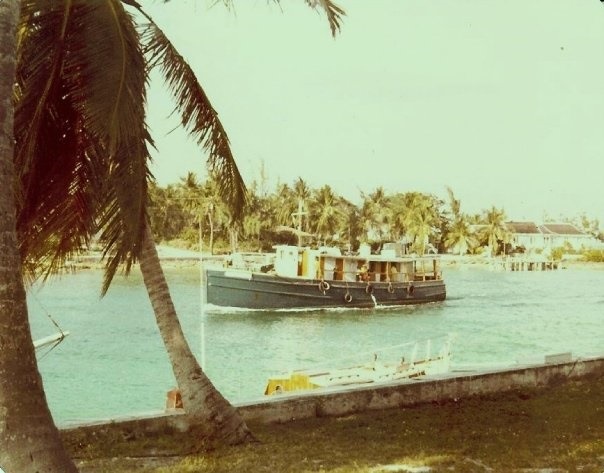 For this photo former AUTEC / Andros resident Eddie Spargur wrote: “Unknown name. I believe I took this shot in the very early 80’s, as this boat was entering Fresh Creek, Andros. The running joke at the time was that mail boats don’t repair leaks, they just add another bilge pump. I’m very curious about the design origins of this type boat. Was this a local hull design, or an adaptation of typical hulls of this size?”

In this post I initially turned the usual format, of me posting information telling readers about vessels followed by a photo, on its head. Here we will post the photo and ask the readers to help identify the vessel.

For LIBERTY I have found a sailing vessel built 1863 – not it. And then a yacht named LIBERTY M owned by William McGrath in the 1930s but she was only 38′ long and 10′ wide and I believe this vessel is substantially bigger. Clearly this LIBERTY is carrying cargo, though it might be a fishing boat as well, given that it is from Spanish Wells, But why register it to Nassau and have a uniformed Captain? The fact it is in color, the skipper is toying with a motor boat for the dinghy, and the estimated vintage of the truck place this photo probably 1955 to 1965.

Can you help? Ron Lightbourn kindly shared this image. If you can add information please do, on the comments tab or to me at eric@ericwiberg.com – THANK YOU and other readers will as well.