Skip to content
Note this marks the discovery of a fascinating – if flawed “European” mailboat in the Bahamas fleet plying from Nassau to Georgetown Exuma in the 1978 – 1998 timeframe (roughly). Feedback welcome!

CONSTRUCTION: as a landing craft in the UK of steel. Repowered in the 1950s: April 1954: New engines mounted. Base and shaft mounted at AS Haugesund Slip , Haugesund , while own company’s own workshop stood for mounting engines: 2 x 8syl 2tev Bergen diesel altogether. 800bhk 12 knots
YEAR BUILT: 23 October, 1944
BUILDER: Tees Side Bridge and Engine Works, Middlesborough, England, UK (or Motherwell, Scotland according to Wikipedia)

EARLY CAREER: 1949-1976 one local liner associated AS Jøsenfjorden Rutelag, Stavanger and was used in that company’s local routes in Ryfylke . “Hjelmeland Fjord” was in many ways the largest and finest local steamer that ever walked in Ryfylke Fjords, -before ferries and speedboats took over traffic.

FATE:  Featured in the WWII catalog of ships named “British & Empire Warships of the Second World War, by H. T. Lenton – pages 462 & 465, suggesting it was built in Britain or her colonies as a small warship.

BAHAMAS CAREER: served as a mailboat roughly from 1978 to roughly 1998 when was wrecked of Crab Cay’s north shore, east of Georgetown, the capital of Exuma. More specifically, from Wikipedia: 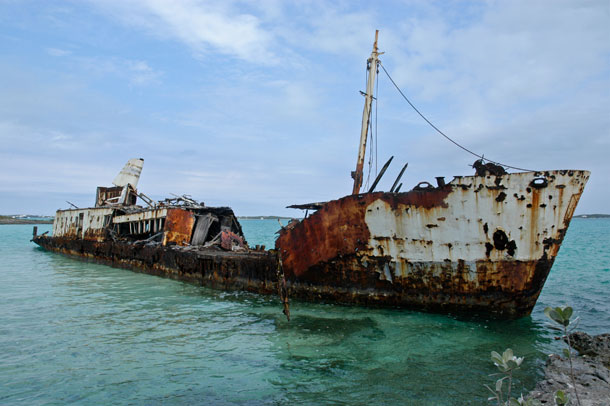 The caption for this photo by a visiting American yachtsman reads: “The wreck Exuma Pride lies off the northern shore of Crab Cay. She was an ‘unofficial’ mailboat put into service by local businessmen. One night she mysteriously slipped her mooring and ended up here.”