U-977 being sunk by
USS Atule on 13 November 1946 off Cape Cod. Photo source:
http://www.navsource.org/archives/08/08403.htm,
further credit to Rubylane.com and Jim Corcoran
To be clear, U-977 never patrolled New England waters during
World War II, however it was sunken by her US Navy captors in waters close by
Cape Cod and Cape Anne Massachusetts following the war, and as one of 10 subs
sunk of New England merits inclusion here. Because he was no longer under Oberleutnant
zur See Heinz Schäffer’s command, he is not biographed here.
When U-977 arrived
in New London Connecticut (the submarine base at Groton) on 12 October  1945 it was from Argentina, and under command
of members of the US Navy and under escort by USS Cherokee. The boat itself was essentially a Prisoner of War (POW). It
was the last U-boat to surrender during the war – it had been taken to Mar Del
Plata, Argentina against standing orders, arriving on the 17th of August 1945. It
was a mad voyage of 108 days from Kristiansand Norway to South America under
water almost the entire three months, undertaken by a brazen young commander
named Heinz Schäffer, who published a post-war book entitled “U-boat 977” to
debunk the many rumors around the voyage.
After the surrender but before the voyage to Argentina Schäffer
deposited those 16 mostly married men who didn’t want to join him ashore via
dinghy in Holsenöy Norway (Uboat.net). After 66 days submerged (using the
new schnorchel technology to ventilate the boat and engines), they stopped off
the Cape Verde Islands for a swim, then headed onwards on the surface.
The trip was very stressful on the men – if seas closed the
flap on the schnorchel then air pressure ratcheted up, hurting the eardrums.
Schäffer ensured all torpedoes were kept on board, despite taking up potential
living space, to avoid that accusation the he might have fired on Allied ships
during the voyage.
Then, once in US hands and despite breakdowns off Brazil and
visits to the President of that country and a Tripartite commission in Port of
Spain Trinidad, it was delivered under its own power to New London. Schäffer
was born in 1921, was only 21 during this patrol, and survived the war, living
until 1979 and age 57. A member of the Crew XII/1939, he sank no ships and
earned the Iron Cross 1st and 2nd Class and the U-boat War Badge of 1939.
What happened once in New London is best summarized by the
expert on post-war U-boat disposal, Derek Waller of Navsource.org. He wrote:
“U-977 was allocated to the US Navy as a war prize, and
in November and December 1945 it took part in a 5-week tour of seven US East
Coast ports in company with the destroyer Baker (DE-190), starting in New
London on 5 November. Baker and U-977 visited Albany (6 to
12 Nov), Poughkeepsie (12 to 15 Nov) and Newburgh (15 to 17 Nov) in New York
State, Wilmington (18 to 22 Nov) and Lewes (22 to 25 Nov) in Delaware, Richmond
(26 Nov to 2 Dec) in Virginia, and Washington, DC (3 to 10 Dec). After arriving
back at New London on 13 December 1945, U-977 was declared out of
service and to be retained for explosive tests”
(http://www.navsource.org/archives/08/08504.htm,
Waller & Mohl). 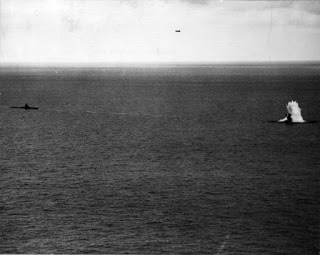 Another view of USS Atule destroying U-977 off Cape Cod on
13 November 1946. Photo courtesy of Jerry Mason, http://www.uboatarchive.net/U-977.htm
The USS Atule (SS 403, AGSS 403) was a young US Navy
submarine, commissioned in June 1944 and decommissioned on 8 September 1947
(she was later recommissioned and served from 1951 to 1973,  sold to Peru and sunk off Callao by a Japanese
fishing vessel in August 1988). Based on a “Tripartite” agreement between the
UK, Russia and the US, she was assigned to sink U-977 in the Gulf of Maine not
far from Massachusetts Bay on the 13th of November 1943.
The attack using a “standard, steam-type torpedo” (see
photos) was filmed from the sub, from other ships and from the air (Waller,
Mason). The final resting place of U-977 is 42°33’N / 69°43’W, roughly 45
nautical miles northeast of Provincetown and 45 nautical miles east from
Gloucester, Massachusetts, in about 850 feet of water (Niestle).
SOURCES:
Helgason, Gudmundur, UBoat.net
Mason, Jerry, www.uboatarchive.net
Mohl, Michael and Waller, Derek, www.navsource.org, http://www.navsource.org/archives/08/08504.htm
Niestlé, Axel, “German U-Boat Losses During World War II –
Details of Destruction,” Naval Institute Press, Annapolis, MD, 1998
Waller, Derek, “The U-Boats that Survived – the Whole
Story,” http://www.uboat.net/articles/91.html