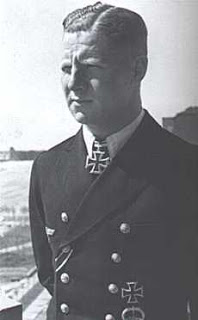 Heinrich Lehmann-Willenbrock who skippered U-96 on a 9-day patrol of New England in February and March 1942. Photo courtesy of http://uboat.net/men/willenbrock.htm.
Kapitänleutnant(later Fregattenkapitän) Heinrich Lehmann-Willenbrock brought his command U-96 into New England waters for a comparatively long patrol of nine days from February 24th to March 5th 1942. The patrol begins south of Cape Sable Nova Scotia, goes west across the Gulf of Maine to a point off Cape Cod, south to off Nantucket, then southeast to a point well south of Cape Sable before closing a box-like route to return to the waters of Nova Scotia on the 5th of March.
Lehman-Willenbrock and his men were highly successful before and after their incursion to New England waters, but sank nothing whilst in them. Between 19 and 22 February U-96 sank the Empire Seal, Lake Osweya and Turengen and Kars, followed on 9 March by the Tyr.
Overall Lehmann-Willenbrock was a very effective skipper who was decorated commensurate with his achievements. He sank or damaged 27 ships of 195,000 tons and was awarded the Knights Cross with Oak Leaves on the final day of 1941, before this patrol.
Born in December 1911 in Bremen, Lehmann-Willenbrock lived until 1986, dying at age 74. A member of the Crew of 1931, he served on the light cruiser Karlsruhe as well as the Horst Wessel, a sail training ship. His early U-Boats were U-8 (1st Watch Officer) and U-5, which he commanded. He managed to flee Brest France before it fell in September 1944 aboard U-256 and arrived in Norway, where he was captured and held for a year.
UBoat.net tells of a colorful post-war career: Lehmann-Willenbrock and another U-Boat commander, Karl-Friedrich Merten cleared ship wrecks from the River Rhine, then he helped build a sailboat, the Magellan and sailed it to Argentina where they founded a racing regatta. As a merchant marine captain in 1959 he and his men rescued survivors of the burning ship Commandante Lyra. He went on to skipper the Otto Hahn, a nuclear research ship, for a decade to 1979. Lehmann-Willenbrock chaired the U-Boat comrades’ association in Bremen for several years. He served as a consultant with the ground-breaking film Das Boot.
SOURCES:
Busch, Rainer and Röll, Hans-Joachim, “German U-Boat Commanders of World War II, A Biographical Dictionary,” Greenhill Books, London and Naval Institute Press, Annapolis, MD, 1999
Helgasson, Guðmundur and Kolbicz, Rainer, www.uboat.net, 2015
Högel, Georg, “U-Boat Emblems of World War II 1939 – 1945,” Schiffer Military History, Atglen, PA, US, 1999
Kurowski, Franz, Knights of the Wehrmacht, Knight’s Cross Holders of the U-Boat Service,” Schiffer Military/Aviation History, Atglen, PA, US, 1995
Mason, Jerry, www.uboatarchive.net – for the KTB or war diary of this patrol, 2015
Niestlé,Axel, “German U-Boat Losses During World War II – Details of Destruction,” Naval Institute Press, Annapolis, MD