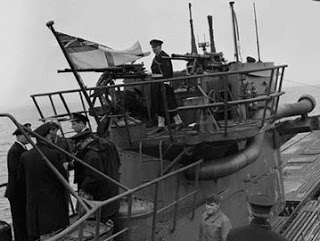 U-889 under the control of the Royal Canadian Navy in
Shelburne, Nova Scotia May 13, 1945. Photo source: http://www.insidehalton.com/community-story/4977019-john-c-campbell-witness-to-german-u-boat-s-surrender/
U-889 never patrolled New England waters during World War
II. Rather, it surrendered in Shelburne, Nova Scotia on the 13th of
May 1945 and was ultimately delivered by the Royal Canadian Navy to the US Navy
in Portsmouth, New Hampshire on January 12th, 1946. The reason U-889
is included in this analysis is because, along with six other German U-boats,
it was sunk off Cape Cod following the war and still rests in the regions
waters – undisturbed for over 70 years.
For the story of U-889’s career I am indebted to Uboat.net
and to her post-war movements (or lack thereof), to Derek Waller of www.navsource.org – he is the reigning
expert on post-war disposal of U-boats. For her surrender, Wikipedia appears to
have the most granular information.
On 8 May Kapitänleutnant Friedrich Braeucker was ordered by
U-boat Headquarters (Admiral Donitz), to surrender, and appears to have
complied promptly with the instruction to surface, proceed to the nearest
Allied port with a black flag of surrender flying. Two days later, on the 10th
of May 1945 a Royal Canadian Air Force plane came upon U-889 motoring on the
surface at 10 knots with a black flag flying.
A Canadian escort force, W-6, was nearby and sped to
intercept U-889 within an hour. At first Braeucker and his men were ordered to
Newfoundland (Bay Bulls), however the following day the sub was assigned to
HMCS Inch Arran and HMCS Buckingham. These frigates escorted U-889 into
Shelburne Harbor, Nova Scotia. There Braeucker formally surrendered and the
Royal Canadian Navy boarded the submarine and took possession of her on 13 May
(Wikipedia).
Friedrich Braeucker was born in Munich in 1919, was a member
of the Crew of 1937A, was 25 years at the time of surrender, and survived the
war, living until November 2010 and age 91. This patrol was his only one, and
he sank no ships during it. He was the recipient of the Iron Cross 1st and 2nd
Class and the Fast Boat War Badge, as he had begun his career in torpedo boats
(1940 – 1943).
The following day, the 14th of May, U-889 was commissioned
in the Royal Canadian Navy, and the day after that taken to nearby Halifax, NS.
U-889 was in excellent condition, and so the Canadians immediately utilized the
sub for trials, including some experiments on her “special hydrophone gear”. However
by the time the US Navy had been allocated the boat and it had been delivered
to Portsmouth NH in January 1946, its batteries had worn out and according to
Waller she was “in a generally non-operational condition” (Waller). 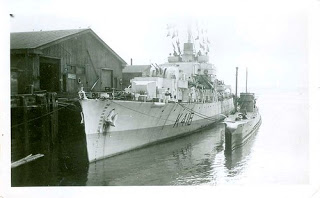 U-899 berthed alongside HMCS Joliette in Shelburne Nova
Scotia following the surrender 13 May 1945. Photo courtesy of http://uboat.net/boats/u889.htm
According to Waller the Americans already had a similar Type
IXC/40 U-boat to experiment with (U-858) and therefore had no need of another. For
that reason U-889 was moored at Portsmouth Naval Yard “for use as a potential
source of spares until the cannibalization action was completed in September
1946, and U-889 was then ready for disposal” (Waller).
The US Navy submarine USS Flying Fish (SS 229, later AGSS
229), was  a local boat inasmuch as she
was built at the Portsmouth Naval Shipyard in Kittery, Maine and commissioned
in December 1941, on the day that Hitler declared war on the US after the Pearl
Harbor attacks. She would receive 12 battle stars during World War II before
being decommissioned in 1954 and ultimately scrapped the following year. On the
20th of November 1947 the Flying Fish was assigned to destroy U-889
off Cape Cod (Waller).
The final resting place of U-889 is Latitude 42°37’N,
Longitude 69°33’W, which is roughly 40 nautical miles northeast of Provincetown
and 40+ nautical miles east of Gloucester, Massachusetts, in about 850 feet of
water. To this author’s knowledge, although U-234 and U-889 were sunk in the
exact same location (Niestle), neither submarine has been discovered since.
SOURCES:
Helgason, Gudmundur, www.UBoat.net
Mason, Jerry, www.uboatarchive.net
Mohl, Michael and Waller, Derek, www.navsource.org, http://www.navsource.org/archives/08/08503.htm
Niestlé, Axel, “German U-Boat Losses During World War II –
Details of Destruction,” Naval Institute Press, Annapolis, MD, 1998
Waller, Derek, “The U-Boats that Survived – the Whole
Story,” http://www.uboat.net/articles/91.html
Waller, Derek, Private correspondence, October 2015
Wikipedia.org, https://en.wikipedia.org/wiki/German_submarine_U-889