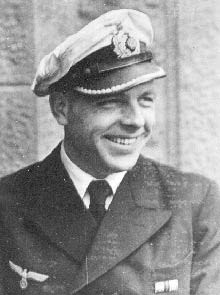 Walter Schug who patrolled off New England for 9 days in August 1942. Photo courtesy of: http://uboat.net/men/commanders/1147.html
KapitänleutnantWalter Schug patrolled New England waters for nine cumulative days in August 1942. Originally his command U-86 entered about 250 miles south of Cape Sable, Nova Scotia, heading west between the 10th and 11th of August. Then the boat turned south, then southwest, exiting the region well south of Block Island (about 350 miles) on the 13th.
U-86 returned to the region about 300 nautical miles southeast of Nantucket on the 21st of August, headed west for three days to a point about 200 miles south of Nantucket, then southwest to a point well south of Montauk, and southeast to exit the area a second time on the 25th of August. The submarine sank no Allied ships whilst in the region, and indeed on its first Operation Paukenschlag patrol from 25 March to 26 May it sank no ships either.
The only vessel sunk on this patrol was the schooner Wawaloam under Capt. Louis Kenedy on 6 August 460 miles south of Cape Race, Newfoundland. The sailing vessel was 342 tons (see the book “The Last Schoonerman” for more details of this extraordinary skipper).
This patrol lasted 79 days between leaving Brest on 2 July 1942 and returning there on the 18thof September. During that time U-86 originally joined a wolfpack named, appropriately, Wolf towards the Newfoundland Bank. They missed one convoy but trailed ON 113 from the 23rd of July (two ships were sunk for the loss of one boat, U-90 – Wynn, Vol. 1, p.65).
U-89 and other Wolf boats dispersed and were refueled by U-461 on the 29th and 30thof July near the Azores. On her final approach to France it is believed (Wynn, Ibid.) that the boat was attacked by an airplane of 58 Squadron. Wynn says that Schug was cautious and wary of approaching the American coastline because at “some time during the patrol she had sustained some damage.”
Walter Schug was a member of the Crew of 1934. Born in October 1910 he perished at age 33 in the North Atlantic east of the Azores when U-86 was sunk by depth charges from HMS Rocket and HMS Tumult on the 29th of November 1943. Schug and his 49 crewmates were lost (UBoat.net, Niestle).
Before joining U-boats in February 1940 he served in Reserve Naval Artillery and was a commanding officer of a Naval Assault Troop Division. He then served as 1st Watch Officer of U-74 from October 1940 to April 1941. He took command of U-86 after its commissioning, in July 1941 (Busch & Röll) Schug’s total was three ships sunk for 9,614 tons and one ship damaged for 8,627 tons. He received no decorations.
SOURCES:
Busch, Rainer and Röll, Hans-Joachim, “German U-Boat Commanders of World War II, A Biographical Dictionary,” Greenhill Books, London and Naval Institute Press, Annapolis, MD, 1999
Helgasson, Guðmundur and Kolbicz, Rainer, www.uboat.net, 2015
Högel, Georg, “U-Boat Emblems of World War II 1939 – 1945,” Schiffer Military History, Atglen, PA, US, 1999
Kurowski, Franz, Knights of the Wehrmacht, Knight’s Cross Holders of the U-Boat Service,” Schiffer Military/Aviation History, Atglen, PA, US, 1995
Mason, Jerry, www.uboatarchive.net – for the KTB or war diary of this patrol, 2015
Niestlé,Axel, “German U-Boat Losses During World War II – Details of Destruction,” Naval Institute Press, Annapolis, MD, 1998