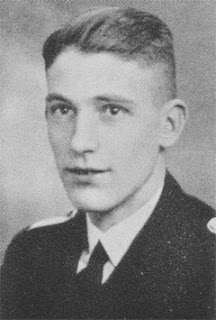 Helmut
Frömsdorf brought U-853 to New England for 16 days during which he
sank one warship of Portland and a merchant ship off Newport before being sunk
on 6 May 1945. Photo courtesy of http://uboat.net/men/commanders/332.html.

Oberleutnant zur See Helmut Frömsdorf, aged
24, brought his command U-853 into New England waters for an extensive patrol
of the region beginning the 20th of April and ending after U-boats
had been ordered to surrender on the 6th of May, 1945 when the boat
was sunk of Newport Rhode Island.
The incursion began on the 20th of April about 50
miles south of Cape Sable, Nova Scotia, heading northwest. Though the sub’s
diary was destroyed with the boat and Frömsdorf wisely never transmitted his
position to U-boat headquarters for fear of being tracked, his basic movements
can be tracked from the attacks which he made. If anything, the actual patrol
in New England may have lasted longer.
Few details are known about this patrol except that on the
23rd of April a few miles off Portland Maine the US Navy patrol craft
USS PE-56 (USS Eagle) was snapped in half by an explosion. Only 13 men managed
to survive the ordeal in freezing waters and were picked up half an hour later
by US Selfridge (DD 357) and one man was picked up by the Nantucket Lightship
(Puleo). Forty-nine perished. The USS Selfridge counter-attacked with nine
depth charges once she had picked up the dozen men.
Although U-853 was in the area and the only submarine there
at the time, and Frömsdorf would prove himself a very aggressive commander when
he sank the Black Point a week or so later, also close to shore, the US Navy
denied until 2001 that a U-Boat could have sunk the Eagle. They claimed instead
that she suffered a boiler explosion (for an account of the survivors’ efforts
to correct this error, sea Puleo). According to first-hand accounts of
survivors, some of them saw a periscope, the colors of U-853’s emblem, and a
conning tower.
Roughly 12 days later, on the 5th of May 1945, Frömsdorf
attacked again. Admiral Donitz had instructed U-boats to cease hostilities on
the 4th of May, but evidently Frömsdorf either did not receive the
order or disregarded it. In any event, on the evening of 5 May in fog he struck
the 5,353-ton American-flagged collier Black Point, laden with 7,759 tons of
coal from Newport News, Virginia to Weymouth, Massachusetts. There were 46 men
on board under the command of Captain Charles E. Prior (UBoat.net).
A well-placed torpedo blew off 40 feet of the stern of the
ship, which quickly started to sink off Point Judith, Rhode Island, in the
Block Island Sound less than 10 miles southwest of Newport Rhode Island. Many
of the merchant sailors got away in a pair of lifeboats and a raft, but a dozen
men, one of them an naval armed guard, perished. They were picked up by the
Norwegian ship Scandinavia and the Yugoslav ship Karmen. Smaller “crash boats”
from Quonset Point took 15 of the survivors to Newport.
According to Wynn (Vol. 2, pp.173-174), U-853 was sighted by
a merchant ship (possibly the Scandinavia or the Karmen) and reported to naval
authorities, who responded by quickly organizing a task group to destroy the
submarine in the shallow, hemmed-in waters of Block Island Sound. The evening
of the 5th USS Moberly arrived on scene, followed by USS Atherton
and other vessels. Five miles east of Grove Point, Block Island the Atherton’s
commander, Lt.-Cdr. L. Iselin, detected the U-boat (Wynn).
USS Atherton dropped depth charges and hedgehogs but then
lost contact with U-853, which was lying prone on the bottom. Three hours later
contact was regained and the Atherton dropped a series of hedgehogs which, in
the words of Wynn, “probably destroyed the boat.”
Unconvinced that the U-boat was destroyed, the naval ships
pummeled away at the last known position until in daylight they discovered a
wooden navigator’s table and an officer’s cap – most likely that of Frömsdorf.
Fifty-six men had perished at a time when half a dozen other German U-boats
were motoring towards the US east coast to surrender in Portmouth, New
Hampshire, or Lewes Deleware. In fact Frömsdorf could have surrendered in
Newport.
Helmut Frömsdorf was born in March 1921 in Silesia and
perished at age 24. His total tonnage was from the Black Point and USS Eagle – c.5,780
tons. He received no decorations. A member of the Crew of IX/1939 he went
through U-boat training in the 1st and 22nd U-boat
flotillas to May 1943. He was 1st Watch Officer of U-853 from June
1943 to August 1944, during which he was acting commander from 17 June to 9 July
1944 (Busch & Roll) under Helmut Sommer.
Sommer was killed by two Wildcat aircraft from USS Croatan, which
strafed the boat, killing 2 and injuring 12 (Wynn, Vol. 2, p.173). Frömsdorf  took charge and evaded further attacks by Avenger
aircraft from the carriers, which was only 30 miles away. The boat survived. After
serving in late 1944 under Günter
Kuhnke , he became commander of U-853 on the first of September 1944
until its demise.
SOURCES: