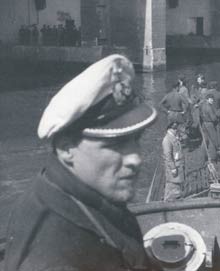 KapitänleutnantVictor Vogel on the conning tower of U-588 in which he executed 4 patrols of 130 days before being sunk by a Canadian corvette and destroyer on 31 July 1942. Courtesy of http://www.uboat.net/men/commanders/1305.html
Kapitänleutnant(posthumously Korvettenkapitän) Victor Vogel brought his charge U-588 eastwards from a point south of Montauk starting on the 10th of March 1942. The patrol in waters near the continental shelf of New England lasted four days, until when U-588 exited the area in a straight line south of Cape Sable on the 13th of March. No ships were sunk in that time.
Before entering New England he sank the Caperby of Convoy ON 66 in the North Atlantic on 1 March. The following day the boat claimed to have damaged then sunk a large tanker, however this was never verified (Wynn, p. 59 Vol. II). According to Wynn this was likely the Consuelo (4,847 tons, British flag) which sent out an SOS on the 1st and reached New York on the 3rd. According to Uboatarchive.net at 10:06 AM March 1st the following was logged by US forces: “SSS from SS CONSUELO, 4700 ton British tanker, 44-10 N., 63-15 W. “sub sighted on surface.” This position 35 nautical miles southeast of Halifax.
On the 10th, while still in New York waters, he dispatched the American tanker Gulftrade on 10th of March. This patrol began in Lorient on 12 February and ended 44 days later in St. Nazaire on the 27th of March.
Vogel, who was 29 at the time of this patrol, was born in Tübingen in November 1912. He was part of the German navy’s Crew of 1932 and up to 1941 served in mine-sweeping and anti-submarine fleets before joining U-Boats in March 1941. In Hamburg that September he took over command of U-588.
Vogel’s total score was 7 ships sunk and 2 damaged of roughly 34,500 tons total. He received no decorations. U-588 was sunk by HMCS Wetaskiwin and HMCS Skeena by depth charges. There were no survivors out of 46 men (Niestlé, 1998, Uboat.net).
SOURCES:
Busch, Rainer and Röll, Hans-Joachim, “German U-Boat Commanders of World War II, A Biographical Dictionary,” Greenhill Books, London and Naval Institute Press, Annapolis, MD, 1999
Helgasson, Guðmundur and Kolbicz, Rainer, www.uboat.net, 2015
Högel, Georg, “U-Boat Emblems of World War II 1939 – 1945,” Schiffer Military History, Atglen, PA, US, 1999
Kurowski, Franz, Knights of the Wehrmacht, Knight’s Cross Holders of the U-Boat Service,” Schiffer Military/Aviation History, Atglen, PA, US, 1995
Mason, Jerry, www.uboatarchive.net – for the KTB or war diary of this patrol, 2015
Niestlé,Axel, “German U-Boat Losses During World War II – Details of Destruction,” Naval Institute Press, Annapolis, MD, 1998